Become a Member
Read Today's E-edition
Share This
Strong down the stretch, Blues top Vegas 3-1
0 comments
Share this
1 of 4 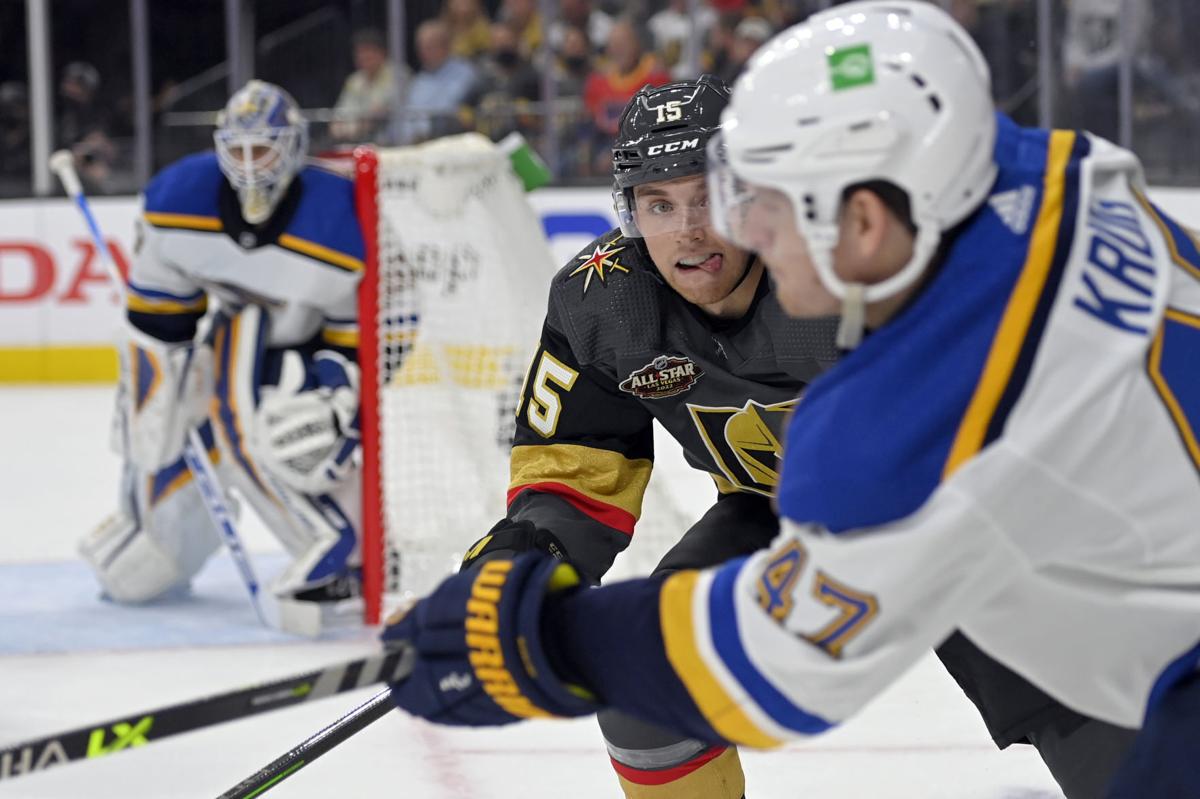 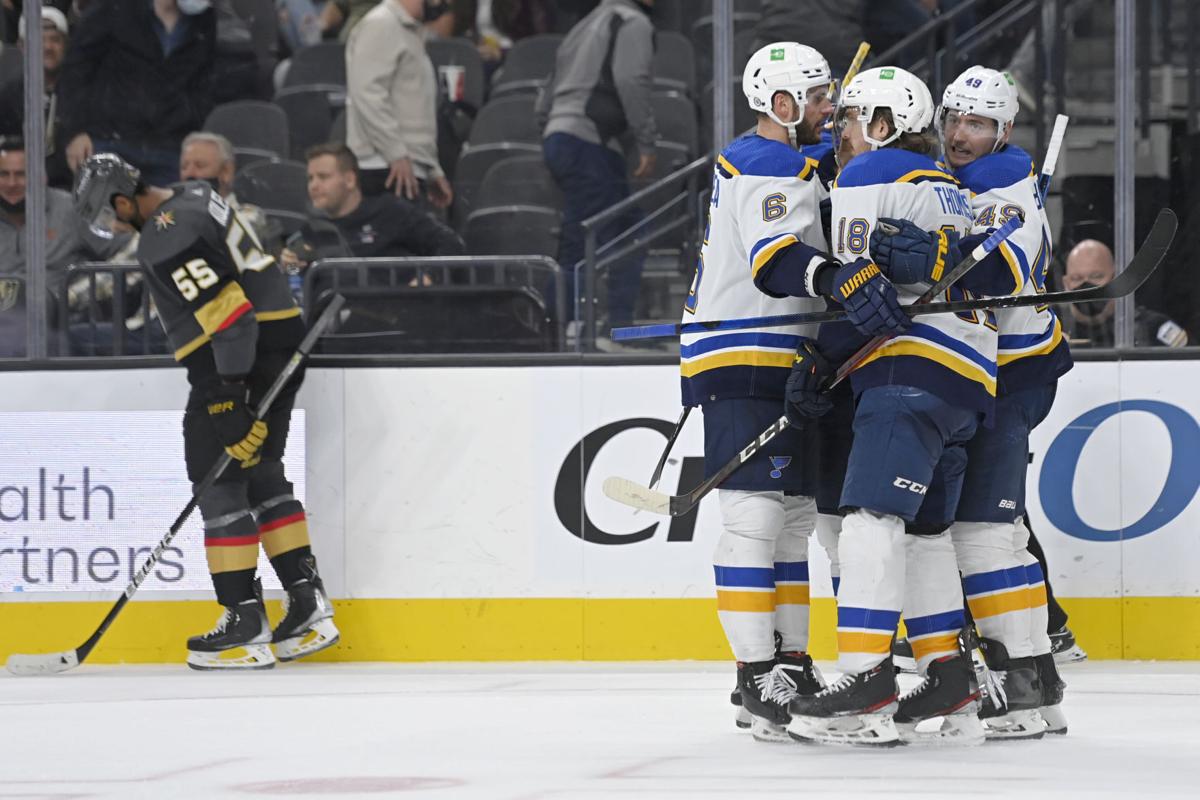 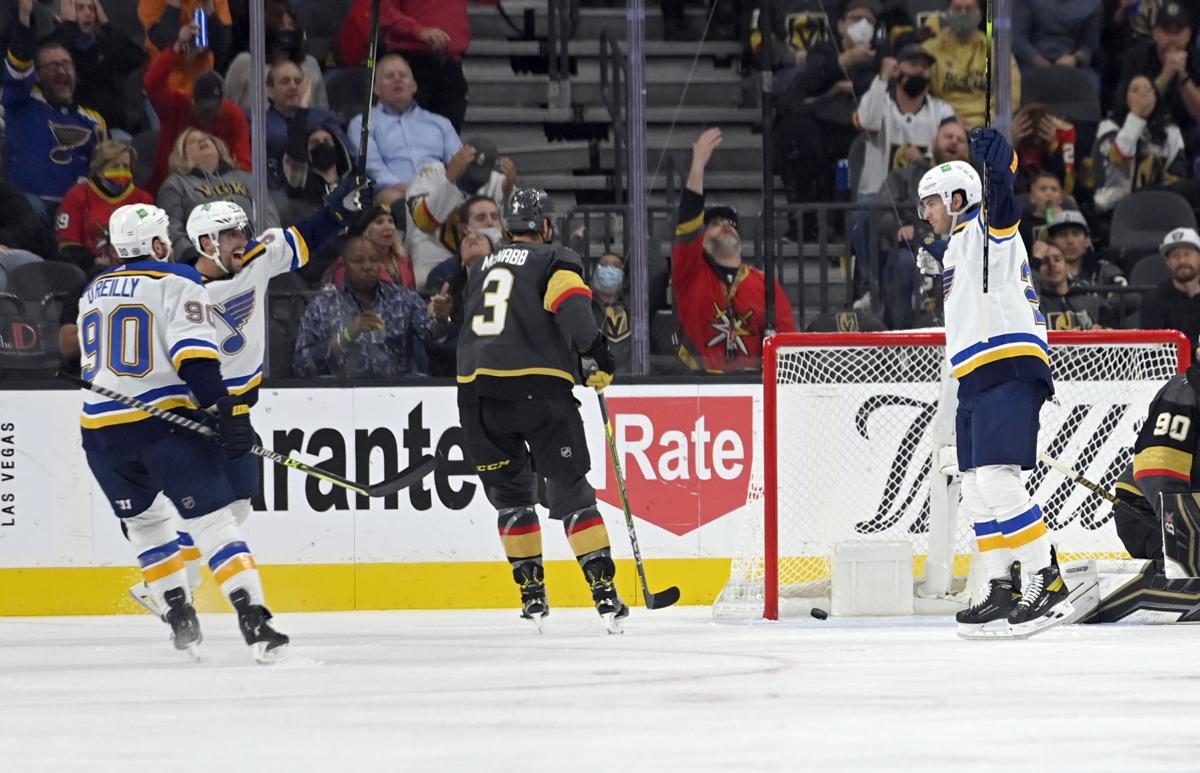 The St. Louis Blues celebrate a goal by left wing Brandon Saad, right, during the second period of an NHL hockey game against the Vegas Golden Knights on Wednesday, Oct. 20, 2021, in Las Vegas. (AP Photo/David Becker) 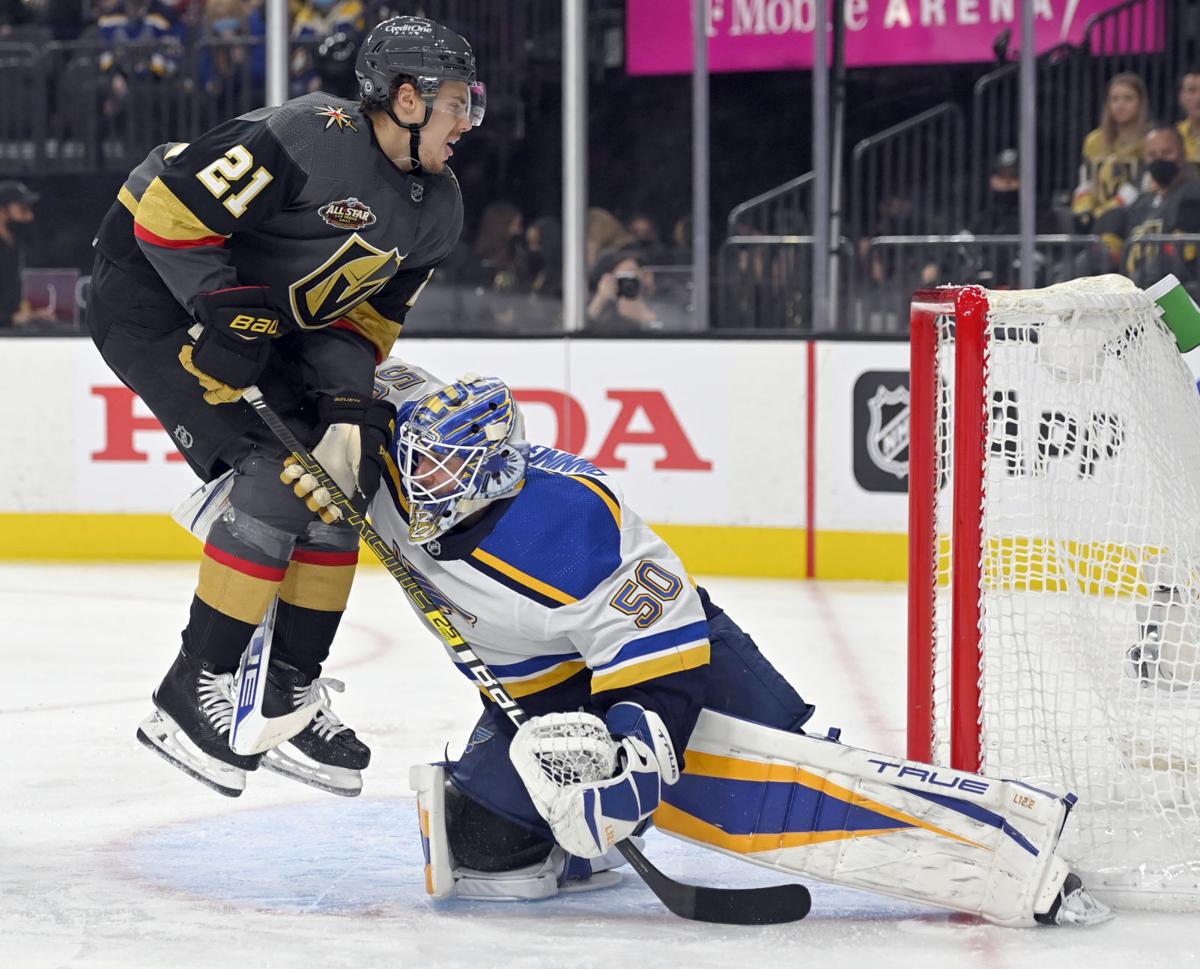 LAS VEGAS – You don’t make statements in Game 3 of a hockey season. There’s just too much road to be traveled.

Nonetheless. . .the Blues have won three consecutive road games to start a season for the first time in franchise history. And two of those victories have come against the teams widely considered the best in the West – the Colorado Avalanche on Saturday and the Vegas Golden Knights, 3-1 Wednesday at T-Mobile Arena.

“It's always hard to play in this building,” Vladimir Tarasenko said. “It's also very exciting game, very good atmosphere, very hard team to play against. I think mentally it's a very important win and it's a great road trip for us. We're ready to go home."

Vladimir Tarasenko, remember that name? Former goal-scorer extraordinaire until being plagued by shoulder issues the past couple of years. Asked to be traded, but still wearing the Bluenote.

Yeah, that guy. Well, Tarasenko was all over the ice Wednesday, sending 11 shots at Vegas goalie Robin Lehner – seven of them on goal.

“The puck seemed like a magnet on his stick out there,” said Brandon Saad, who scored the Blues’ first goal Wednesday and his first goal as a Blue. “He had a lot of chances. He’s a great player, a great goal-scorer, so it was only a matter of time before that went in for him.”

“For me, it was his attack, his skating,” coach Craig Berube said of Tarasenko. “Taking people wide, jumping the holes, strong on the puck. All the things that he’s capable of doing he did tonight.”

With the game in the balance, tied 1-1 in the third period, Tarasenko raced down the ice with Brayden Schenn and Jordan Kyrou on a 3-on-2 rush. Schenn, skating down the slot, passed right to Jordan Kyrou, who feathered a pace across the crease for a Tarasenko tap-in with 10 minutes 11 seconds to play.

It was Tarasenko’s first regular-season goal since last April 26 against Colorado. And his first game-winner since March 7, 2019, against the Los Angeles Kings – yep, all the way back to the Blues’ Stanley Cup year. He now had 36th career game winners, fifth-best in franchise history.

“I’m just happy for him,” said Jordan Binnington, who was superb in goal stopping 42 of 43 shots. “He’s been working so hard. He’s been through a lot, and it’s really nice to see him rewarded. I can’t say enough about that guy and his work ethic. We’re all happy for him and hopefully more to come.”

Sensing that Tarasenko was on his game, Berube sprinkled him onto some other lines as the evening progressed. Tarasenko was in rookie Jake Neighbours’ spot on the Schenn line when he broke the 1-1 tie.

“All I need to do is put the puck on net, so it was a very easy goal,” Tarasenko said. “Great play by Schenner and Kyrou."

After the goal, Tarasenko and former Blues captain Alex Pietrangelo went at each other – it looked like Pietrangelo was the instigator – and a brief scrum ensued.

At the start of the sequence, Pietrangelo absorbed a hard check behind the Vegas goal from Schenn, and reacted by grabbing Schenn’s stick and throwing it to the ice. But who knows if that was related to the post-goal skirmish.

“I’m not going to talk about this,” Tarasenko said. “I have no idea what happened. It’s a game, so guys get emotional. This is part of hockey.”

Just being part of hockey is a relief to Tarasenko after playing only 34 regular-season games the previous two regular seasons.

"I mean, it's nice to play the game,” Tarasenko said. “I missed a lot of time. I enjoy my time out there with the guys. Goals are nice, wins are nice. Guys make great plays. But like I said, there's ways to improve my game and improve our team game, so we'll focus on this more."

Unlike the Colorado and Arizona games, in which the Blues had trouble holding big leads in the final period, they were strong down the stretch in closing out this one.

The Blues didn’t fall back on their heels. They stayed tight defensively, provided support for each other on zone exits, and had a couple of offensive pushes of their own.

“It’s something that we’re working on for sure,” Binnington said. “We’re aware of the last couple games. You know every game’s gonna be different. It’s a tie game in the third period and we really stepped up, got ahead and closed the door. Just fought right till the end.”

With 2:14 left and a faceoff in the St. Louis zone, Lehner went to the Vegas bench in favor of an extra attacker. But the Blues were tight and aggressive in the 6-on-5 situation. Robert Thomas got to a loose puck in the neutral zone and with the Knights in hot pursuit, passed to Ivan Barbashev for a back-hand empty-net goal and a 3-1 Blues lead with 1:12 left.

“I think Binner deserves the most credit,” Tarasenko said. “The ‘Ds’ played well. Binner played outstanding so far this season. . . .He saved us in the key moments of the game, don't let them score goals. He was awesome. The forwards tried to helps the Ds. The Ds helping the goalie. The goalie helping us all.”

And here they are 3-0-0 and heading back to St. Louis for the home opener Saturday against the Kings.

“I thought we came out in the third and did a good job,” Berube said. “It was just a good game all-around by both teams. It was a real good hockey game. Fortunately we came out on top. And I thought that we did a good job after getting the lead and closed that game out. I think our guys were pretty dialed in.”

That they are. But it is only three games. There’s a lot of road to be traveled over the next several months.

“This game’s in the past for me already,” Berube said. “We’re gonna focus on LA. LA’s a very good team. So yeah, you take momentum from it. Yeah, we’re gonna be a confident hockey team for sure.

“But bottom line is, we gotta keep improving, and we just gotta stay with the way we want to play and play the right way. That’s the process. And you gotta just keep pounding away at it. . . .You can’t take anything for granted.”

Blackhawks give up 4 goals in the 1st period

John Doe 2’s attorney filed a motion to open discovery in his suit against the Chicago Blackhawks, alleging the team already engaged in "one-sided discovery."

Chicago Blackhawks have sent letters to Kyle Beach’s attorney pressing for a mediator — but the parties "have very different views" about settlement money.

The St. Louis Blues celebrate a goal by left wing Brandon Saad, right, during the second period of an NHL hockey game against the Vegas Golden Knights on Wednesday, Oct. 20, 2021, in Las Vegas. (AP Photo/David Becker)