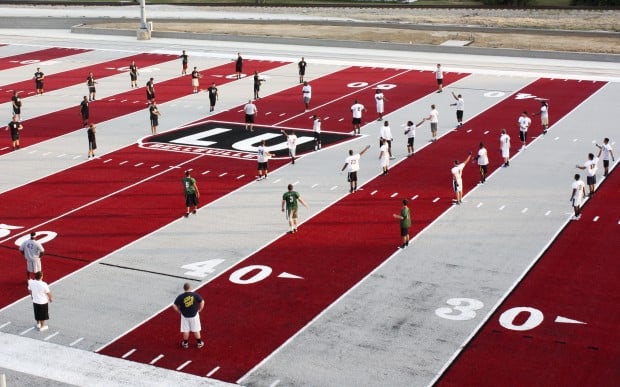 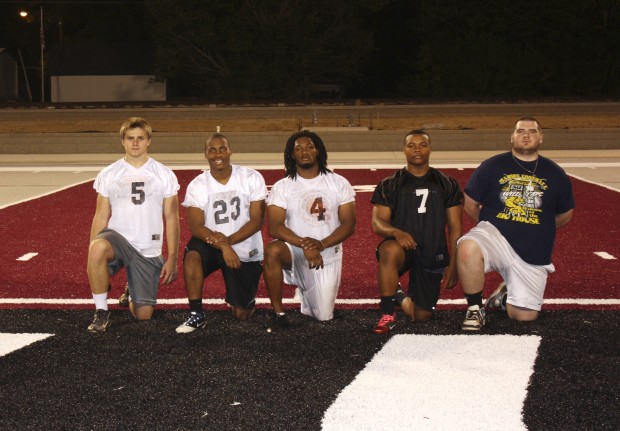 From left, Cayle Diggins of DuQuoin, Jay Riley of Marion, Antuan Davis of Herrin, Adrian Williams of Centralia, and Austin Dixon of Marion will be playing for Lindenwood University. (Provided)

BY PETE SPITLER, The Southern

BELLEVILLE — There is something unique on the campus of the University of Lindenwood-Belleville and a football program entering its first year of existence this fall.

Gone is the rickety two-story wooden press box that occupied the visitor’s side of Lindenwood Stadium, formerly Township Stadium. Gone is the grass surface, replaced by Cardinal red and gray striped EnviroTurf.

Even the aging concrete bleachers were resurfaced and the seating is new.

The $2.3 million stadium renovation is scheduled for a July 15 completion date, helping to usher in a pioneer Lynx recruiting class that includes 12 Southern Illinois standouts.

“In this type of situation, I think the first thing is getting to know the school and getting to know which market to appeal to,” said Lindenwood coach Jeff Fisher, a Cambria native. “You want to make sure that what we’re going to give kids is what they’re going to use in four years after they graduate.”

Known as LU-Belleville, the Lynx occupy a campus formerly home to Belleville West High School and will play their inaugural season as a member of the NAIA with five home games.

“We went into this season with the mindset that we weren’t going to back away from a game,” Fisher said. “We play two NCAA Division II teams (Kentucky Wesleyan and Oklahoma Panhandle State University), two NAIA playoff teams (University of Saint Francis and Valley City State University) and a Central Methodist University team that scored 47 points on Southeast Missouri State last year.”

Helping Fisher achieve success this year will be a group of Southern Illinois athletes that is very familiar. Four (Jay Riley, Dylon Woolard, Tyler Wolz and Austin Dickson) are from Marion, with two each from Mount Vernon (Dan Morrison and Blake Stricklin) and Pinckneyville (Sabin Kohut and Brad Thornton).

“We wanted to bring in kids that we knew were going to be here for four years and build the program up,” Fisher said. “Right out of the gate, we talked to each and every high school coach and kid to see who was an academic fit, first and foremost.

“We presented them with the dream that we had and we had to find those guys with the pioneering spirit to build something out of nothing.”

Rivals in high school, Davis and Riley will be roommates in college. Both were All-South selections who helped the Southern Illinois All-Stars beat the Western Kentucky All-Stars in June at Murray State University.

“Being a first-year team won’t be an excuse for a bad season,” Riley said. “I feel like we’re going to come out of the gate and put Lindenwood on the map.”

Wolz and Dickson are transfers from SIU and will help anchor the Lynx offensive line. Riley was recruited as a wide receiver/defensive back, while Davis’s high skill level presented a challenge to the coaching staff.

Known for making electrifying plays out of the backfield for Herrin, the 6-foot, 200-pounder is finding that the college game is a bit of an adjustment.

“The game speed and getting used to everybody being at a top performance level,” Davis said. “In college, everybody’s as good as you, so there’s no breaking five tackles and running for 60 yards.”

Similar to the situation at West Frankfort-based Morthland College, Fisher is finding that the lure of being a pioneer and a program builder is an attractive deal for athletes, who may only get this opportunity once in their careers.

But even without history to look back on, the standards are still high for the Lynx.

“I look at it as there’s not really a ton of options for Southern Illinois kids to continue their football careers,” Fisher said. “What really enticed me was that they were hungry for this opportunity.”

We have complied a list of the most-read stories on thesouthern.com in 2012.

From left, Cayle Diggins of DuQuoin, Jay Riley of Marion, Antuan Davis of Herrin, Adrian Williams of Centralia, and Austin Dixon of Marion will be playing for Lindenwood University. (Provided)