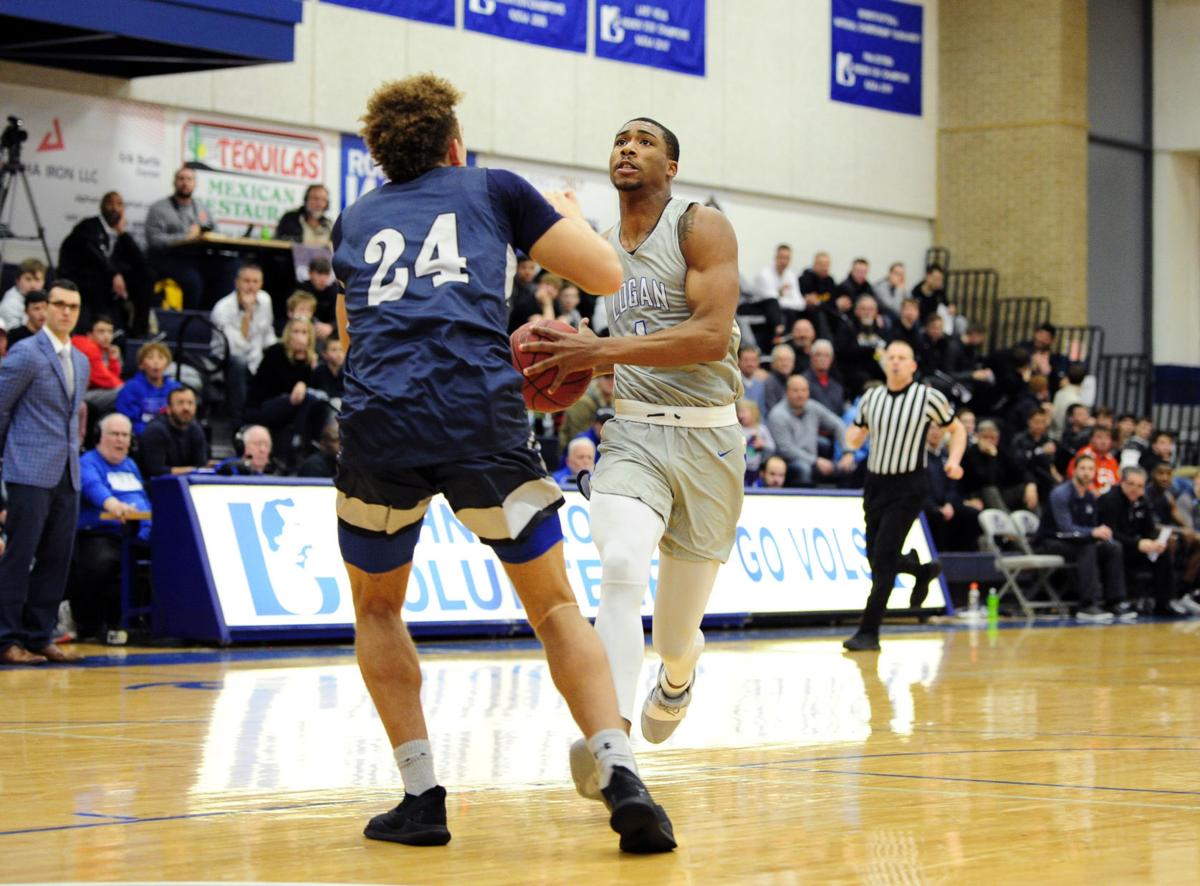 John A. Logan forward Jayden Scrubb goes to the basket in a game against Olney Central College at John A. Logan College last season at Carterville.

JALC forward Jayden Scrubb puts up a shot in a game against Olney Central College at John A. Logan College last season in Carterville.

CARTERVILLE — Even being invited to the USA Basketball U19 World Cup Team training camp in Colorado Springs was an honor for John A. Logan sophomore Jayden Scrubb, but the 6-foot-6 guard didn't get his first passport for nothing.

"Just going out there and finding something that separates me," Scrubb said. "Hustling, doing the little things. Doing the dirty work, rebounding, being a good person and a good teammate, all of that good stuff."

Scrubb, considered by many to be one of the top junior college players in the country in the 2020 recruiting class, shot 54.9% from the field, 46.4% from the 3-point line (51 of 110) and 79.1% at the free-throw line in his first collegiate season. Eighty-one of his 266 boards came at the offensive end in 31 games, and he tied Great Rivers Athletic Conference player of the year David Sloan for the team lead in steals (34). At 6-6, Scrubb can stretch the defense on the perimeter, handles it well enough to drive, and can guard bigger players.

His versatility may help him make the 12-man roster that will travel to Heraklion, Greece, and complete June 29 through July 7.

"Jay weighs 215 pounds. He's 6-6, 6-7, and he's fast, and he's long," Logan coach Kyle Smithpeters said. "That was the best thing about him last year, he could switch and guard just about any position. He was big enough to stand his ground against a center, and was able to hold his position long enough, and he's so long and quick he can recover against a smaller guard. He was definitely position-less, but he could be 1 through 5 on defense."

The field, as you would expect, is packed with talent, even with the withdrawal of R.J. Hampton and Isaiah Stewart. Hampton, a top-five recruit in the 2019 class, announced earlier this year he was skipping college basketball and going to play pro ball in New Zealand. Stewart, the No. 2 player in the 2019 class by Rivals.com, plays for La Lumiere School and committed to Washington earlier this year.

The team trials include two players that have already won international gold with Team USA, 2020 No. 1 recruit Evan Mobley, a center from Temecula, California, and power forward Jeremiah Robinson-Earl of IMG Academy in Florida. Point guard Cade Cunningham, the No. 2 player in the Rivals 100 for the 2020 class, is scheduled to be there, along with No. 6 prospect Scottie Barnes, No. 8 recruit Ziaire Williams and No. 15 Sharife Cooper.

Scrubb is one of nine college sophomores at the camp. Kessler Edwards of Pepperdine, Tyrese Haliburton of Iowa State, Kira Lewis Jr. of Alabama, Isaac Likekele of Oklahoma State, Trevion Williams of Purdue, Bryce Willis of Stanford, Jared Butler of Baylor and Reggie Perry of Mississippi State are the others. Scrubb is the only non-Division I incoming sophomore at the camp.

"Hard work," Scrubb said. "If you're talented, people are gonna find you, regardless. You just gotta keep working hard."

CARBONDALE — John A. Logan College guard Jayden Scrubb did not make the first cut Tuesday for the USA Basketball U19 World Cup Team.

CARTERVILLE — John A. Logan's men's basketball team closed out its 2019 recruiting class with the addition of sophomore Trace Young from the U…

Jay Scrubb of John A. Logan has been named preseason National Player of the Year by Street & Smith’s Hoops Preview. The Volunteers are ran…

Logan's Scrubb, the top-ranked JUCO player in the nation, commits to Louisville

CARBONDALE — Jay Scrubb, a sophomore guard at John A. Logan College that is the top-ranked junior college player in the nation by 247sports.co…

Hefferman: Some day Logan players will fit at SIU

In less than a month, new SIU men's basketball coach Bryan Mullins has managed to open doors the previous staff couldn't seem to in seven years.

NCAA Will Allow Athletes to Make Money From Endorsements

NCAA Will Allow Athletes to Make Money From Endorsements

John A. Logan forward Jayden Scrubb goes to the basket in a game against Olney Central College at John A. Logan College last season at Carterville.

JALC forward Jayden Scrubb puts up a shot in a game against Olney Central College at John A. Logan College last season in Carterville.