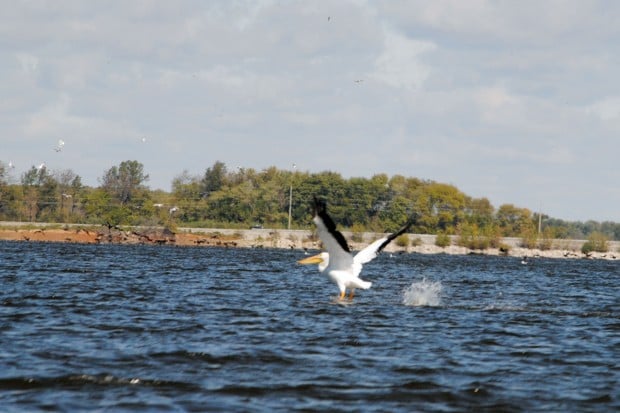 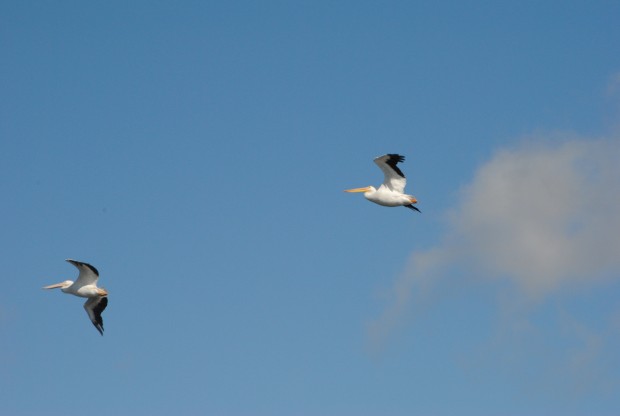 BY LES WINKELER, The Southern

WHITTINGTON - Strange as it might seem, the American white pelican is becoming a common sight in Southern Illinois during the fall migration.

Currently, there are good numbers of pelicans at Rend Lake. They can be seen swimming about, or skimming just a few feet above the surface.

The pelicans stop in Southern Illinois while traveling from their breeding grounds in Canada and North and South Dakota. They are most likely to be seen on large bodies of water like Rend or Crab Orchard lakes. The white pelican's ultimate destination is the Gulf Coast or possibly Mexico.

"They like large bodies of water, fairly deep water with decent fish populations where they can forage," said T.J. Benson, a wildlife ecologist with the Illinois Natural History Survey. "It could just be related to food resources. They may be safer where they can be out in the middle at night and not subject to predators. Those larger bodies of water are probably going to support larger populations of fish."

While the white pelican may winter in areas near the brown pelican, they are different critters.

"They forage in a very different type of way," Benson said. "The (white) pelicans just kind of swim along and they have this group foraging where they have a big line and they circle up. They just kind of scoop up the fish."

By contrast, the brown pelican obtains its food by diving into the water.

While the white pelican travels through the region each fall and spring, they are more apt to be seen in the fall.

"In the spring there is more incentive to get there (the breeding grounds) and start breeding so they can complete the breeding cycle," Benson said. "The migration cycle for pelicans tends to be more spread out. If they have adequate resources and there is a lot of food around, they'll just hang out."

The fall migration is triggered by photo periods, the amount of daily sunlight, and weather.

"It's kind of a combination of those two factors," Benson said.

Because of the length of the migration period, wildlife watchers are apt to see the birds for extended periods. However, new birds might be moving in as others resume the southern journey.

"You do end up with turnover," Benson said. "It's one of those things where you see pelicans, you see them there for a protracted period of time, but you don't really know unless you mark them how long the individuals are staying around."

The number of pelicans visiting the region seems to be on the increase.

"Anecdotally, you're definitely seeing more and more," Benson said. ‘It's kind of true that wetland birds in general are tending to do better over time. Some of that is habitat restoration and cleaning up waterways. In the past 10-15 years or so, their populations have probably increased a lot."

The Illinois Department of Natural Resources is now charging $25 for a fishing tournament permits and 10% of revenue for tournaments with more than 20 participants.