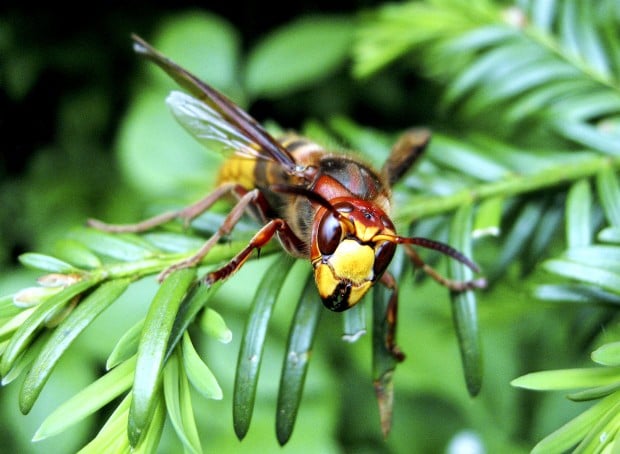 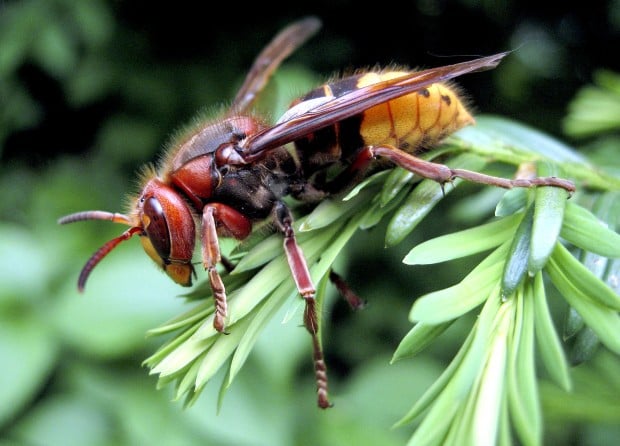 BY LES WINKELER, The Southern

The European hornet was introduced to the United States sometime between 1840-60. Eventually the hornet made its way to Illinois and is fairly common in wooded areas.

It is found throughout the eastern United States and into the Dakotas.

The hornet, which resemble yellow jackets, but are much larger, have become somewhat more of a pest in recent years. Several Southern Illinois residents have reported seeing the hornets attack, and kill, ruby-throated hummingbirds.

“I saw the bugs kill four or five hummingbirds last year and this year while banding at Dave and Jean Conrod’s place,” said Cathie Hutcheson in an email. “Dave saw one stinging a hummingbird in the grass and was able to swat it away, but as the bird flew away the bug chased it.”

The European hornet typically eats caterpillars, grasshoppers and other insects. They are also known to prey on honey bees.

“I can see that (attacks on hummingbirds) happening, but I’ve never heard of it,” said J.E. McPherson, a retired professor of entomology at SIU. “If you look at these social wasps, when they go out and find something like a caterpillar, they have tremendous jaws.

“They will jump on a caterpillar and chew them up and make little meat balls. They bring them back to the nest to feed the larvae.”

“I’ve heard occasional reports of that (hummingbird attacks),” said Chris Dietrich, an entomologist with the Illinois Natural History Survey. “I haven’t heard anything unusual in terms of frequency. This is the first I’ve heard of it becoming more of a problem than normal.”

The European hornet typically nests in wooded areas, primarily in hollow trees. However, nests are sometimes found in barns, attics, sheds and in open spaces in walls.

“They prefer forest habitats,” Dietrich said. “Mature trees, that’s the kind of habitat they like. They are not all that common in populated areas. It’s a fairly widespread commond species that have been here a long time.”

Hummingbirds are in most danger when there are large numbers of the hornets.

“Hummingbirds can hold their own in most cases,” Dietrich said. “If there is a nest near the feeder, the wasps tend to be more aggressive around their nests.

“Typically, I haven’t heard too many reports of them just attacking a hummingbird. They’ll buzz, but they typically won’t sting.”

Brown: The new fishing tournament fee and tax are unfair and bad for fishing in general

The way to mess up a good thing in fishing is to establish a new set of guidelines that make it unaffordable. The new tournament fee and tax from the IDNR did just that.

Brown: We need to work together to save fishing tournaments

In Illinois, the target at fishing tournaments was winning, but it now may be working together and doing everything we can to preserve what we have.