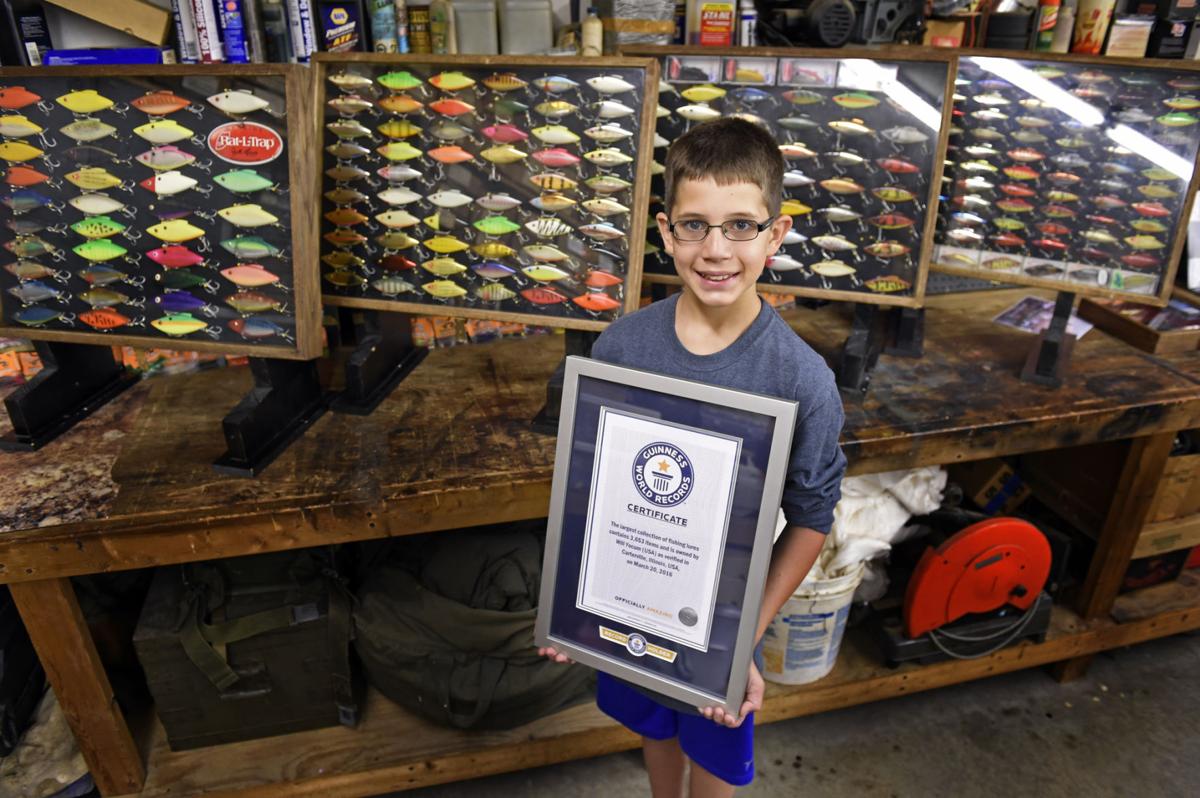 Will Yocum of Carterville holds his Guinness World Record certificate in front of just a portion of his more than 3,600 fishing lures. His world record was verified in March. 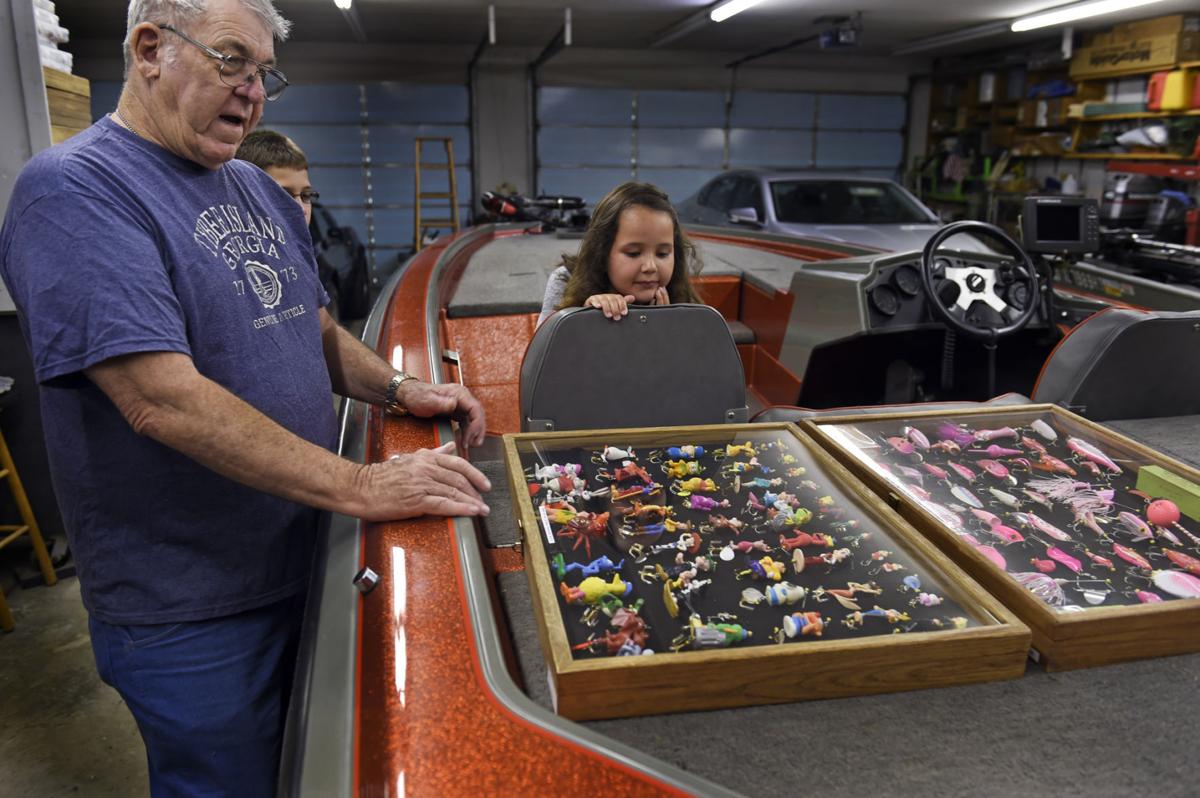 Fred Washburn (left) and his granddaughter, Katie Yocum, show a portion of her collection of cartoon character lures and pink lures. 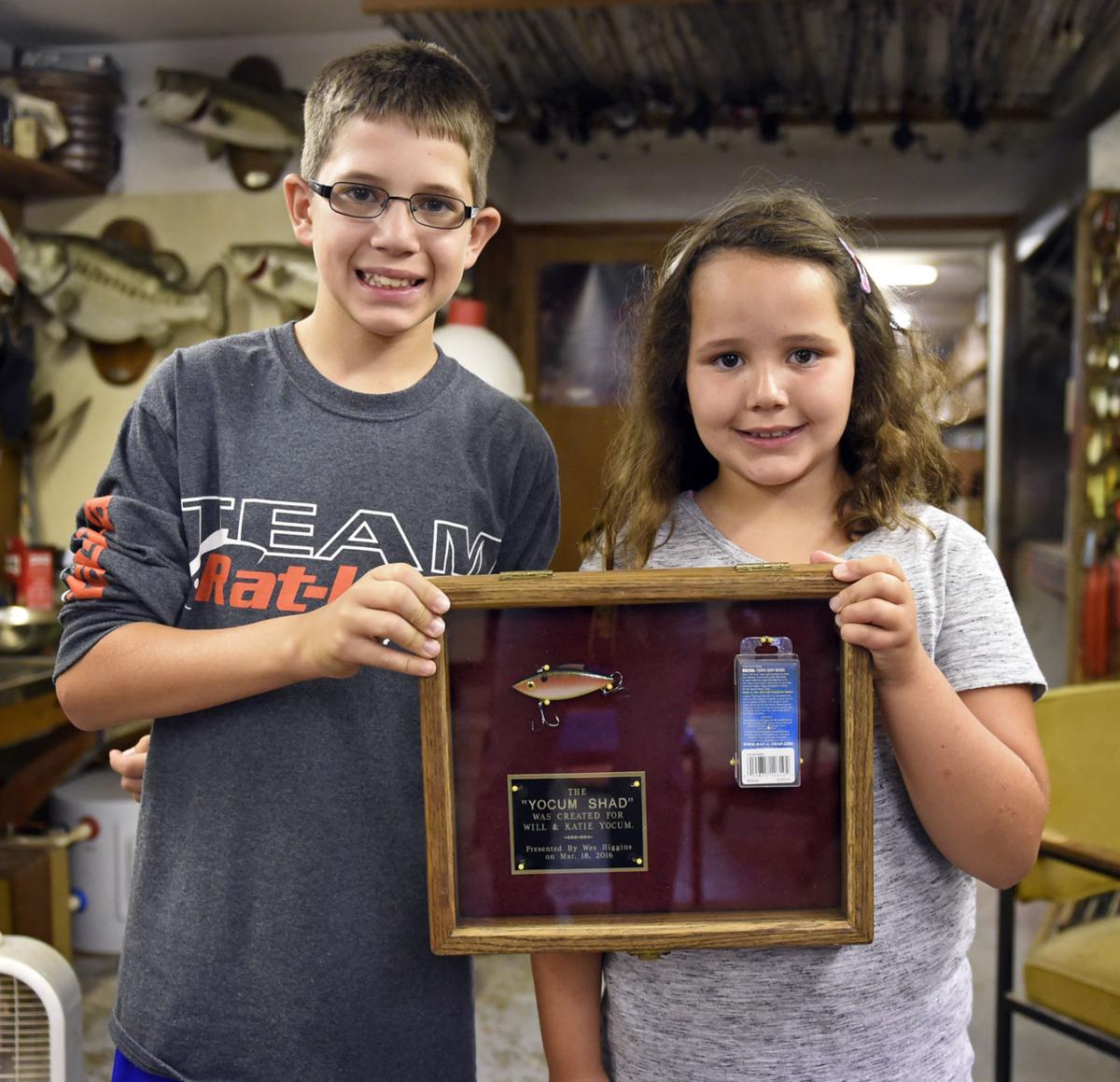 Will and Katie Yocum even have a lure named after them, the "Yocum Shad."

CARTERVILLE — It all seemed quite innocent eight years ago.

Will Yocum, who was four at the time, frequently accompanied Fred Washburn, his grandfather, to National Fishing Lure Collectors Club shows. Now, the Carterville seventh-grader is going into the Guinness Book of World Records for his collection.

“One day I wanted to start collecting,” Yocum said. “I asked my pa-pa if I could start collecting something. He suggested Rat-L-Traps. We went home and found a good bit of them that he had fished with. There were 364.”

Those 364 lures have grown into 3,653 Rat-L-Traps of every size and color combination. The collection has made Yocum something of a celebrity. The Learning Channel found out about the collection through the NFLCC Facebook page.

TLC came to Carterville earlier this spring and spent five days filming Yocum, Washburn and Yocum’s eight-year-old sister, Katie, a collector in her own right.

The TLC segment will be on “Kid’s Collectibles.” No date has been announced for the airing.

“It was very tiring,” Yocum said of his television experience.

During the filming, the Guinness Book of World Records also arrived in Carterville.

“We were doing the TV show, the people from TLC got us into that,” Yocum said. “They had a guy from Guinness come down here. He counted all the baits and gave me the plaque to declare I had the biggest Rat-L-Trap collection.”

Although his collection was declared the most extensive in the world, Yocum and his grandpa still have their eyes out for additional baits.

“We’re not sure 100 percent if we have all the old ones because every once in a while we find one,” Yocum said. “When a new one comes out we get them first.”

“I don’t think either one of us had a clue how many there were,” Washburn added. “They had special orders. If you wanted one with a blue top or a green bottom, they would make them for you if you ordered a dozen.”

Yocum has his favorites within the collection.

“My favorite would probably be some of the Hypocrites,” he said. “They are two-sided baits. They have different patterns on each side. They may have crappie on one side and a bass on the other side.”

Washburn said Rat-L-Trap made the unique baits for just one year.

And, for the record, Yocum enjoys throwing a Rat-L-Trap from time to time.

“They are pretty much fun to fish with,” he said.

And, he is branching out. Yocum has started a “critter collection” — lures resembling bugs, mice, crawdads and others. In the meantime, Katie has a collection of pink lures and cartoon characters.

Perhaps the crowning testament to their collections is that Rat-L-Trap has named a lure after the youngsters — The Yocum Shad.

Most tackle and boat companies work very hard at building brand affinity. Brand loyalty is a tough nut to crack due to the number of choices anglers have today.

Will Yocum of Carterville holds his Guinness World Record certificate in front of just a portion of his more than 3,600 fishing lures. His world record was verified in March.

Fred Washburn (left) and his granddaughter, Katie Yocum, show a portion of her collection of cartoon character lures and pink lures.

Will and Katie Yocum even have a lure named after them, the "Yocum Shad."