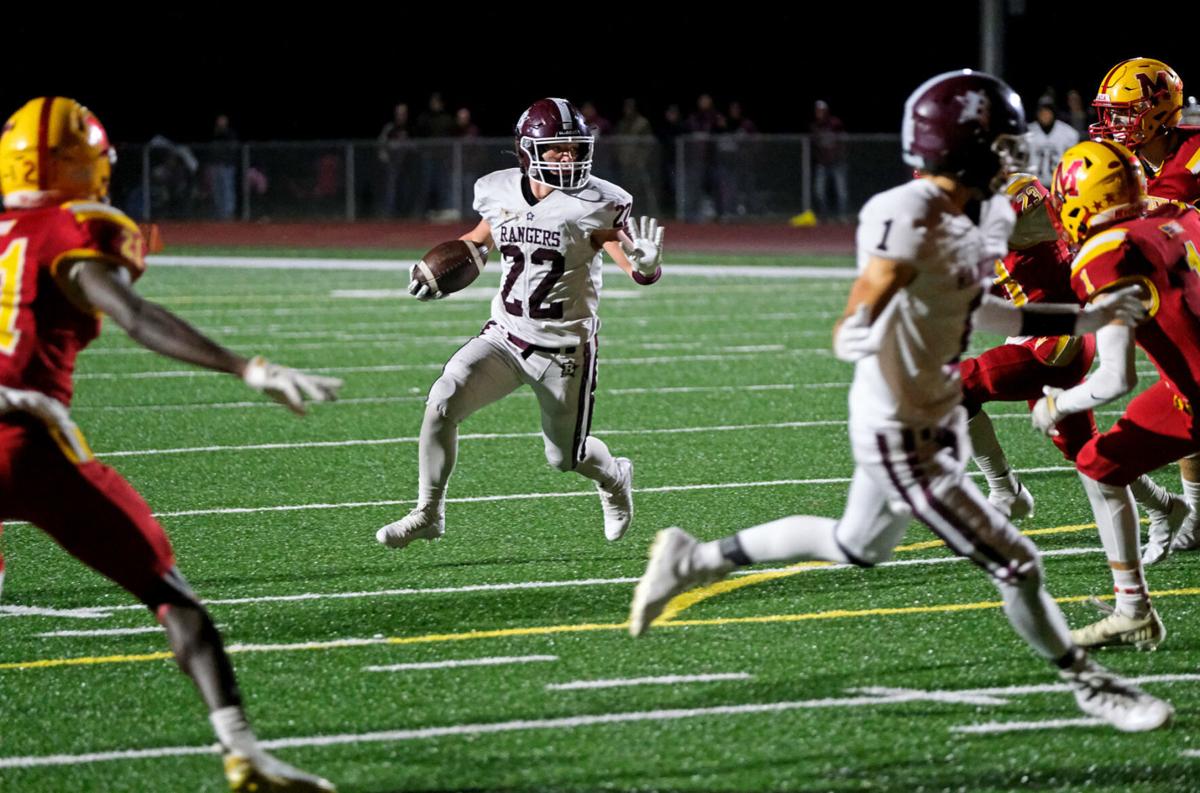 Benton’s Wyatt Upton (22) looks for running room against Murphysboro during the second quarter on Friday in Murphysboro. 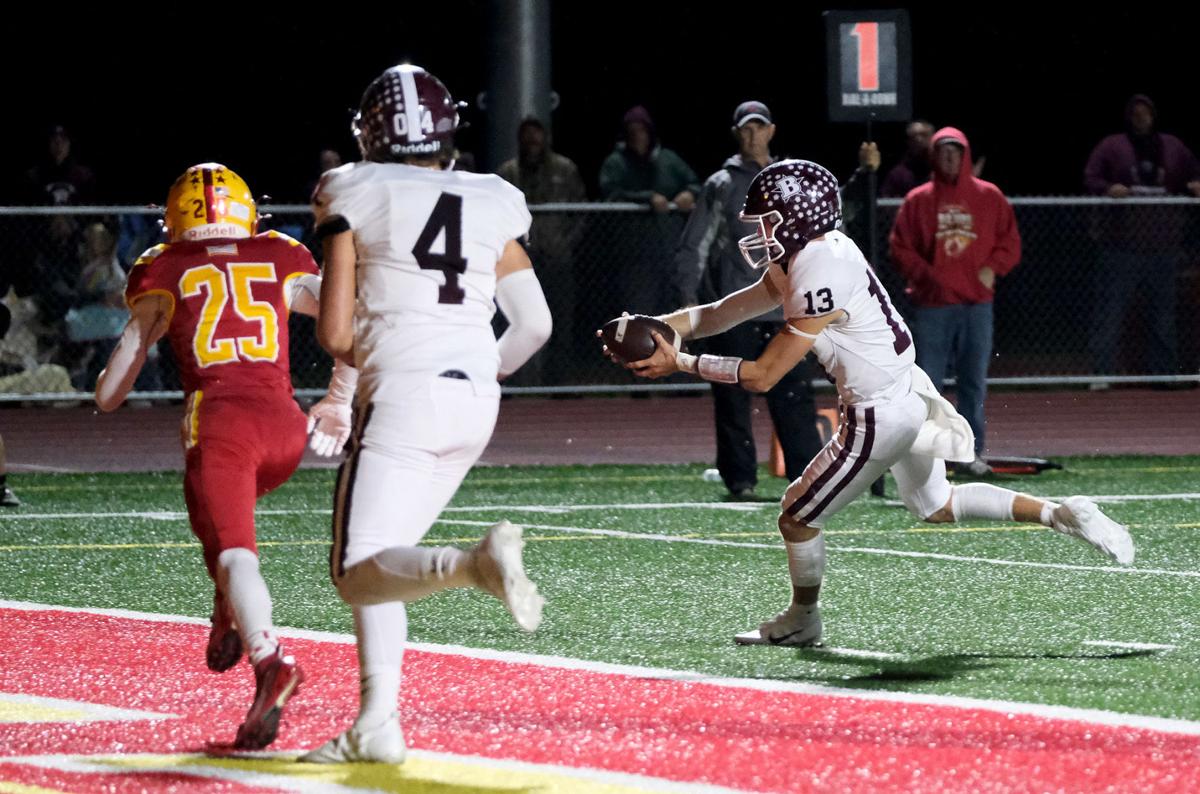 Benton’s Keegan Glover (13) scores on a 9-yard touchdown run during the first quarter against Murphysboro on Friday in Murphysboro. 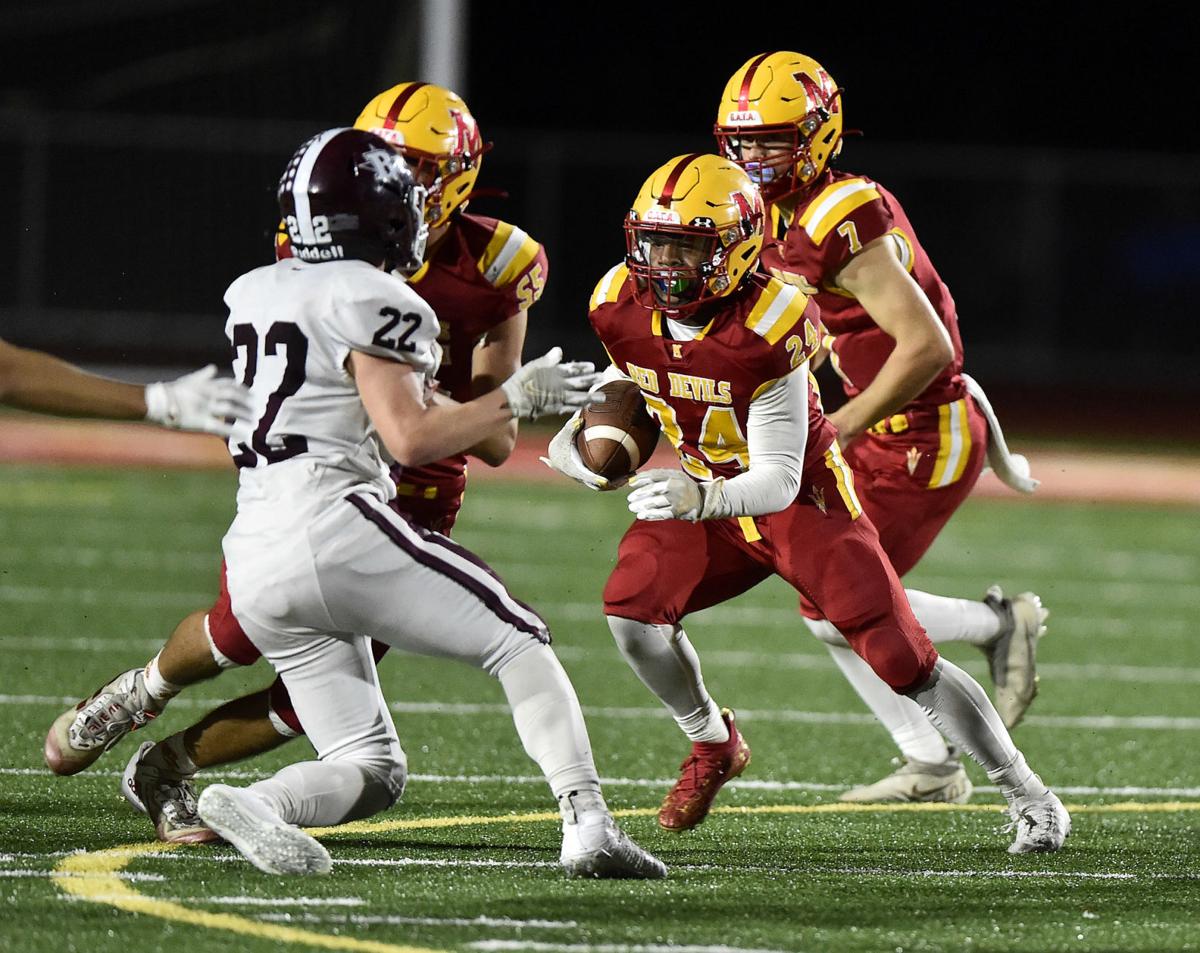 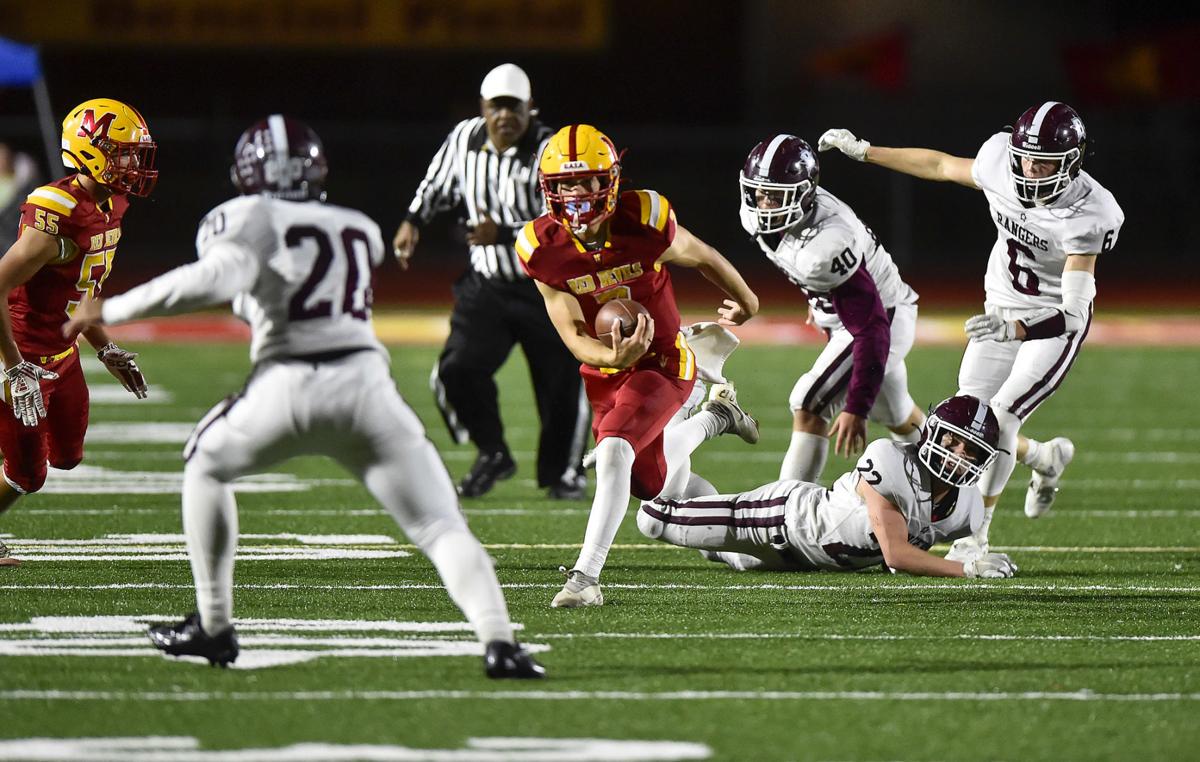 Murphysboro’s Drew Caldwell (7) looks for running room through the Benton defense during the first quarter on Friday in Murphysboro. 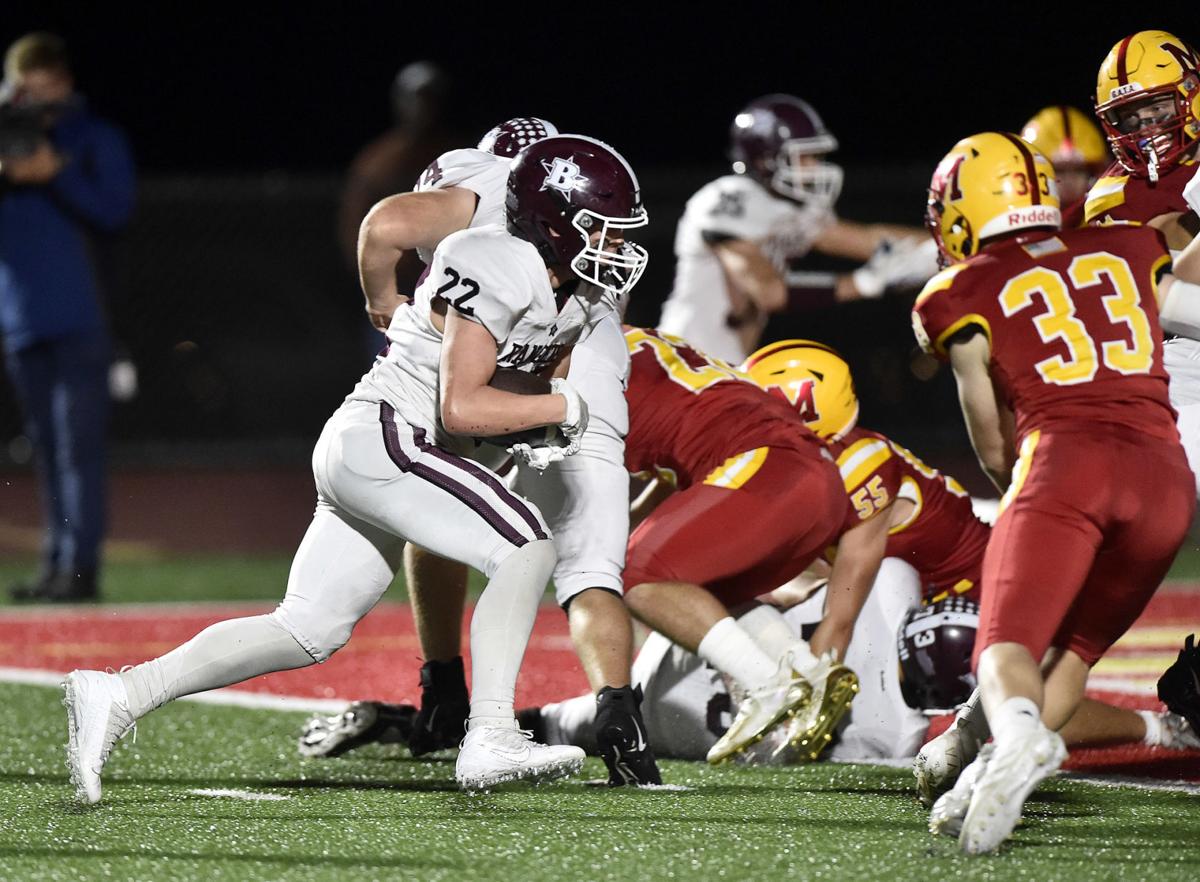 Benton’s Wyatt Upton (22) heads for the end zone on a touchdown run during the first quarter against Murphysboro Oct. 15 in Murphysboro. 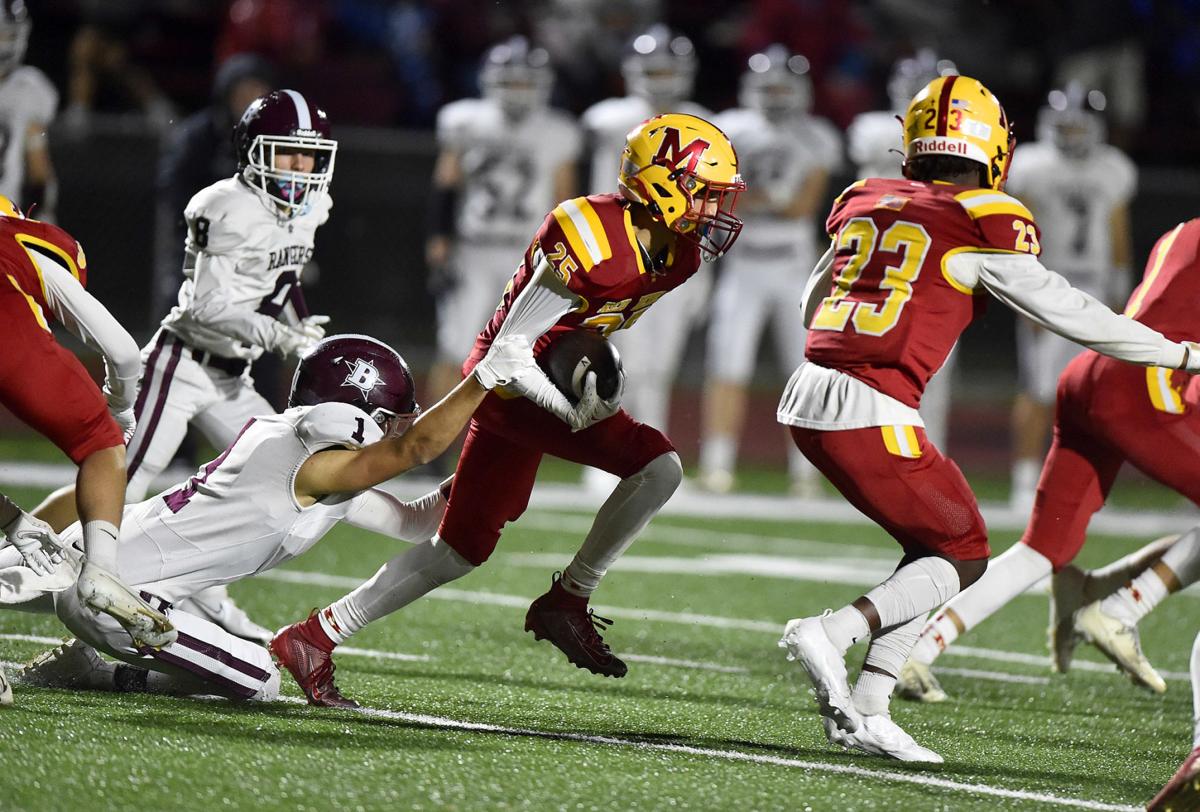 Murphysboro’s Ethan Sunny (25) is slowed down by Benton’s Reid Baumgarte (1) on a kickoff return during the first quarter on Friday in Murphysboro. 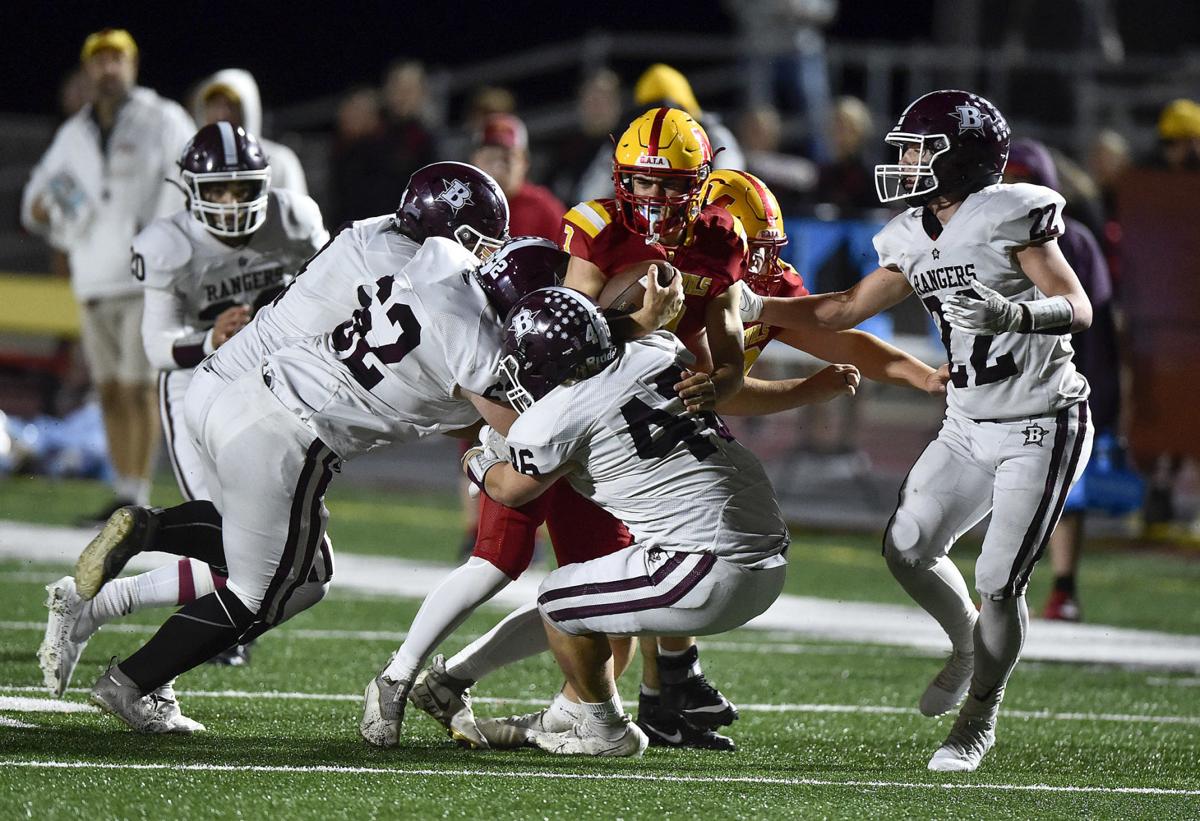 The Benton defense stops Murphysboro’s Drew Caldwell during the first quarter on Oct. 15 in Murphysboro.

With the SIRR Ohio title on the line, all the Rangers did was score every time they touched the ball while containing Murphysboro’s big-play threats in a 55-14 beatdown at Bencini Field.

Benton (8-0, 5-0) won the conference title for the second time in less than six months while displaying that its unbeaten record has real substance. While its first seven opponents came into Week 8 with only 14 wins, the Red Devils (6-2, 4-1) had already earned a playoff spot.

No matter. The Rangers treated them as though they were any of the other opponents that they’ve hammered this year, only doing so in a different fashion. Benton quarterback Keegan Glover, who is probably the top passer in the area, tried just four passes on a cold, wet, windy night.

But he ran for 114 yards and three touchdowns while Wyatt Upton collected 187 yards and three more scores behind a completely dominant performance by the offensive line.

“Give the credit to them,” Glover said. “Rain was to Murphy’s benefit, but our offensive line was lights out tonight. We like to throw the ball, but our line let us do what we wanted. We threw it a few times but ran it a whole lot.”

There was no reason for the Rangers to fix what wasn’t broken. They bagged 389 yards on 39 carries, which is practically a first down on every play. They ran 43 plays and moved the chains 19 times against a solid defense.

The night’s symbolic play came early in the fourth quarter, after the issue was decided. After a 14-yard loss on first down and a blindside block erased a Glover touchdown, Benton faced 1st-and-39 at the Red Devils’ 42.

No worries. Upton tore through a big hole up the middle, got to the right sideline and covered the distance for his final touchdown that made it 48-7 and activated a running clock for the final 10:28.

“Congrats to the O-line and congrats to us,” Glover said. “That was a crazy performance by them.”

Each team’s first possession foretold the night to come. Murphysboro went 3-and-out, dropping two catchable passes that could have produced a first down.

Benton took over at the Red Devils’ 49 after a 31-yard punt into the wind and covered the distance in just three running plays. Upton burst 29 and 12 yards on the first two snaps and Glover slalomed 8 yards for a 7-0 lead just 1:47 into the game.

The Red Devils kept the ball for nearly 7 ½ minutes on their next drive and could have had first and goal from the 2 after a 48-yard run by Calvon Clemons, but an illegal shift erased that big play. They ended up reaching the 32 before a 4th-and-7 pass fell incomplete under heavy pressure.

The Rangers needed only four plays and 1:23 to double their lead. Upton’s 22-yard run inside the 1 set up his touchdown on the next play at the 1:18 mark of the quarter.

Murphysboro got back into the game on its next possession, using its trademark speed. Devon Clemons broke a tackle near the scrimmage line on 3rd-and-19, got to the right boundary and zipped 67 yards with 8:29 left in the first half to make it 14-7.

But Benton calmly responded with a 72-yard drive that saw it convert its first third down situation. After throwing his only pass of the first half, an incompletion, Glover cut from left to right and scored on a 21-yard run with 5:33 remaining.

The Rangers capped a perfect first half offensively with Glover’s 10-yard scoring jaunt 33 seconds before intermission, five plays after a blocked punt set them up at the Red Devils’ 25. It finished a half in which Benton gained 213 yards – all on the ground.

Any hopes Murphysboro might have entertained of a second half rally basically ended when the Rangers drove 65 yards after the kickoff went out of bounds. Glover found Reid Baumgarte for completions of 9 and 19 yards that moved the chains and Upton capped the march with a 5-yard run at the 8:24 mark for a 35-7 advantage.

Where are they now? | Steve Lacy raised bar high for Marion football

It's time to take another trip into the Way Back Machine with Marion the destination on this particular journey.

Prep Football | Nashville gets a second chance at 2A title

DEKALB – For Nashville’s football team, Friday’s 1 p.m. Class 2A championship game against Wilmington at Huskie Stadium represents more than a…

Benton’s Wyatt Upton (22) looks for running room against Murphysboro during the second quarter on Friday in Murphysboro.

Benton’s Keegan Glover (13) scores on a 9-yard touchdown run during the first quarter against Murphysboro on Friday in Murphysboro.

Murphysboro’s Drew Caldwell (7) looks for running room through the Benton defense during the first quarter on Friday in Murphysboro.

Benton’s Wyatt Upton (22) heads for the end zone on a touchdown run during the first quarter against Murphysboro Oct. 15 in Murphysboro.

Murphysboro’s Ethan Sunny (25) is slowed down by Benton’s Reid Baumgarte (1) on a kickoff return during the first quarter on Friday in Murphysboro.

The Benton defense stops Murphysboro’s Drew Caldwell during the first quarter on Oct. 15 in Murphysboro.