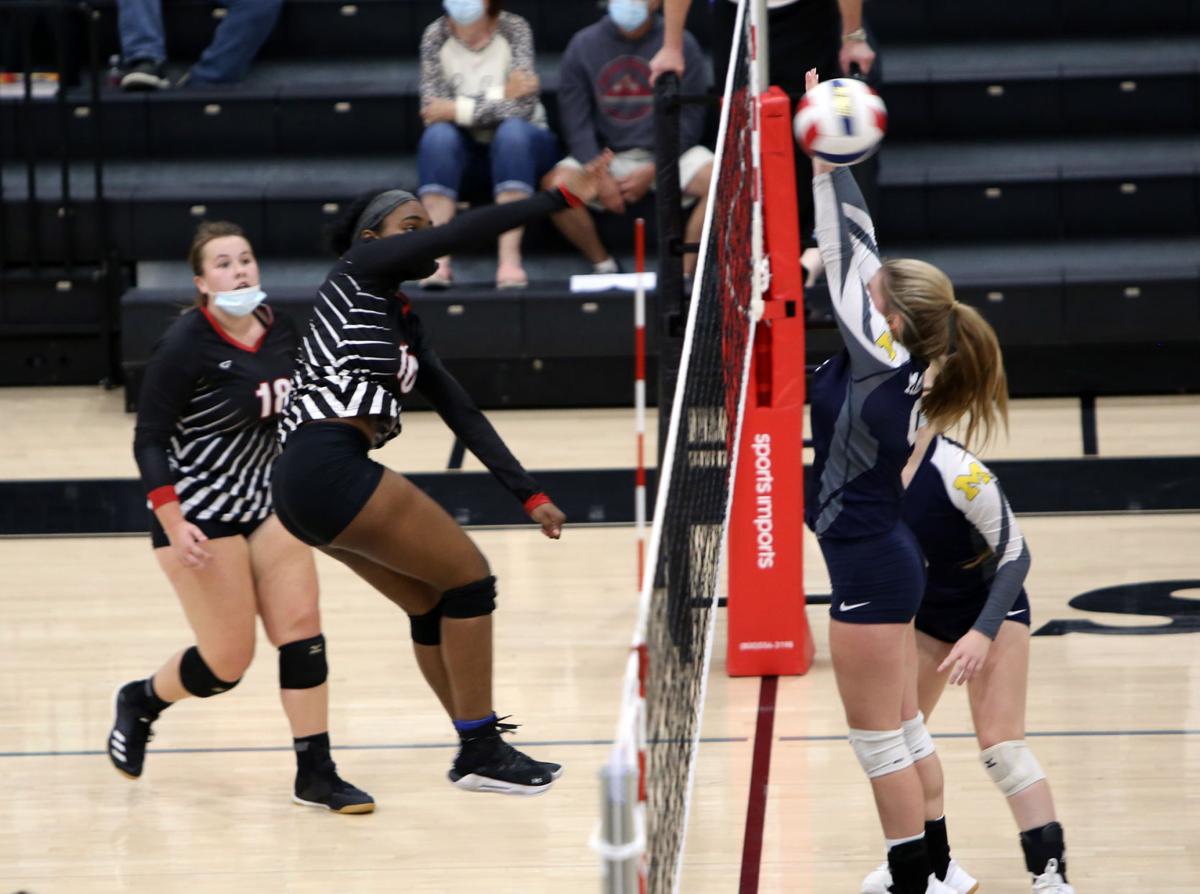 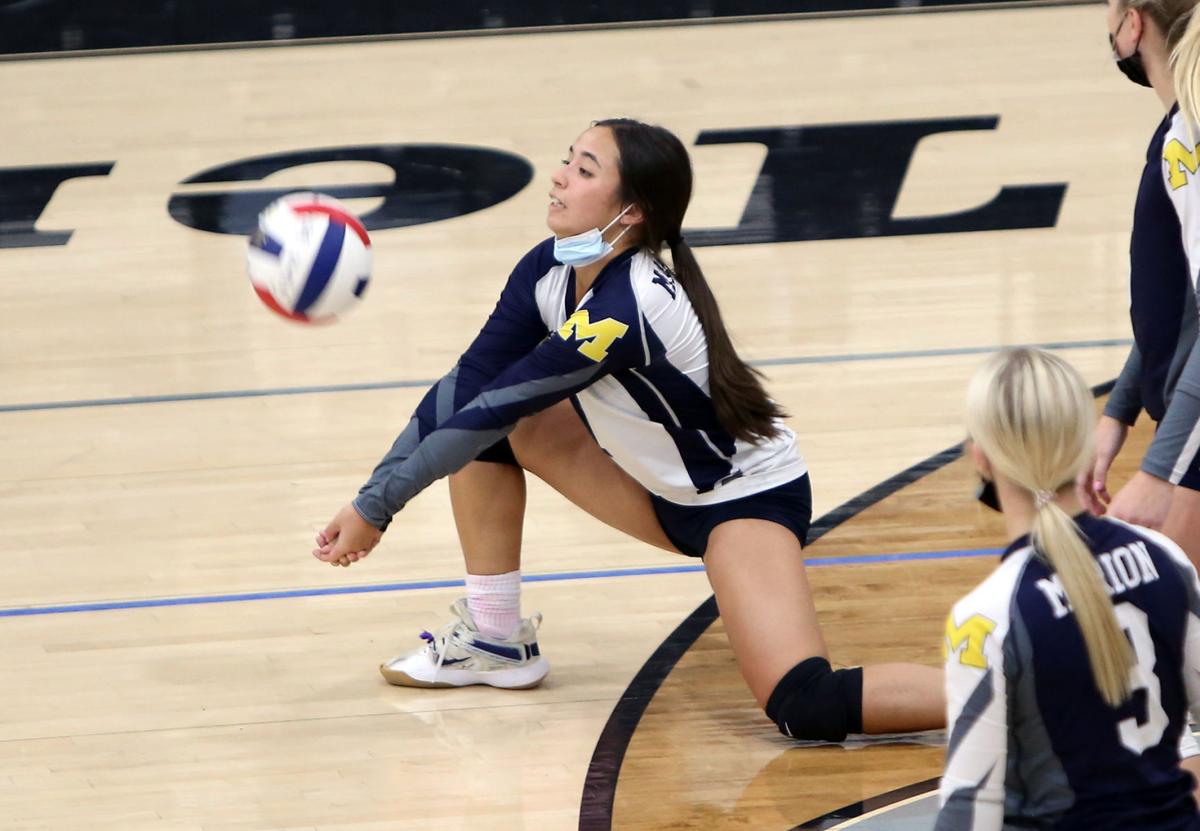 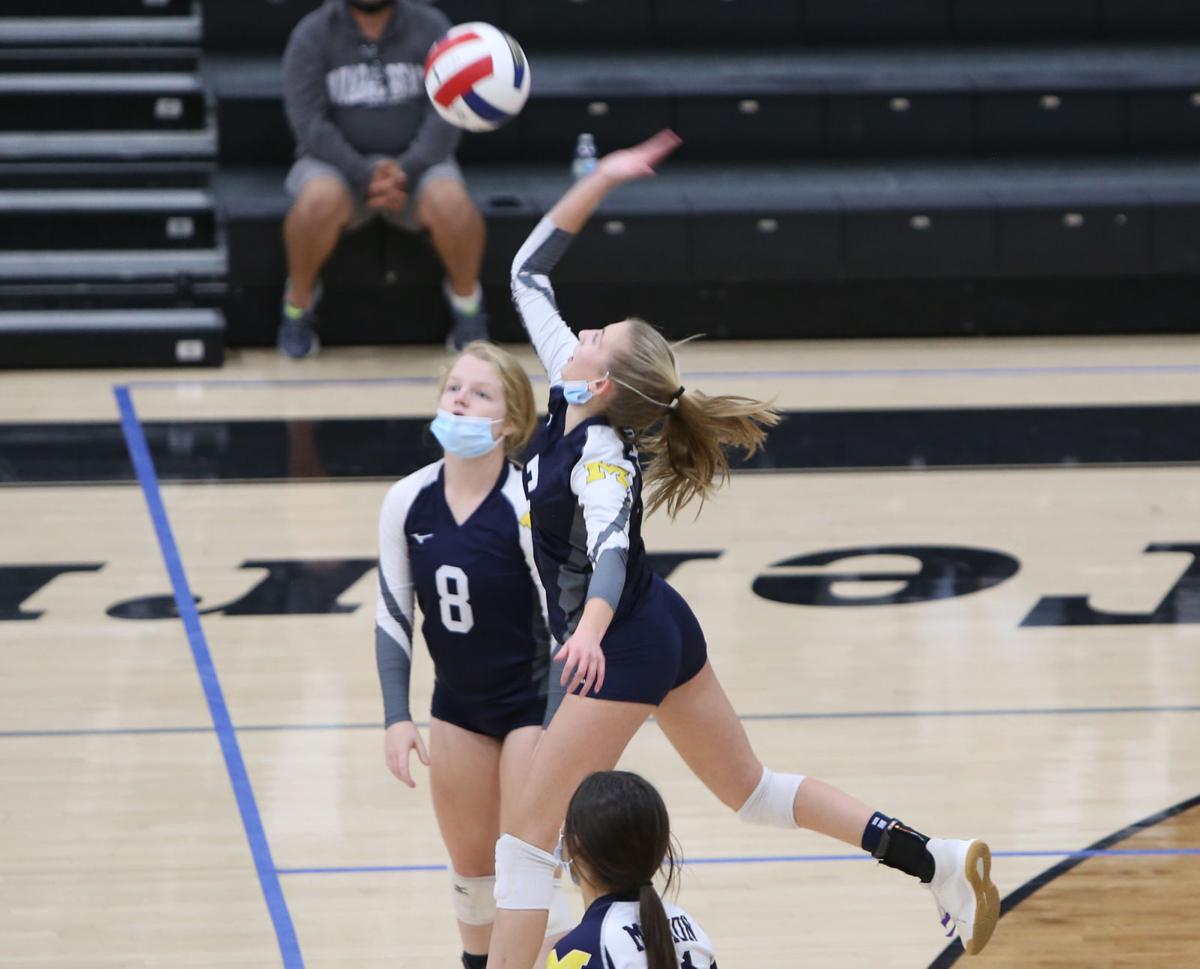 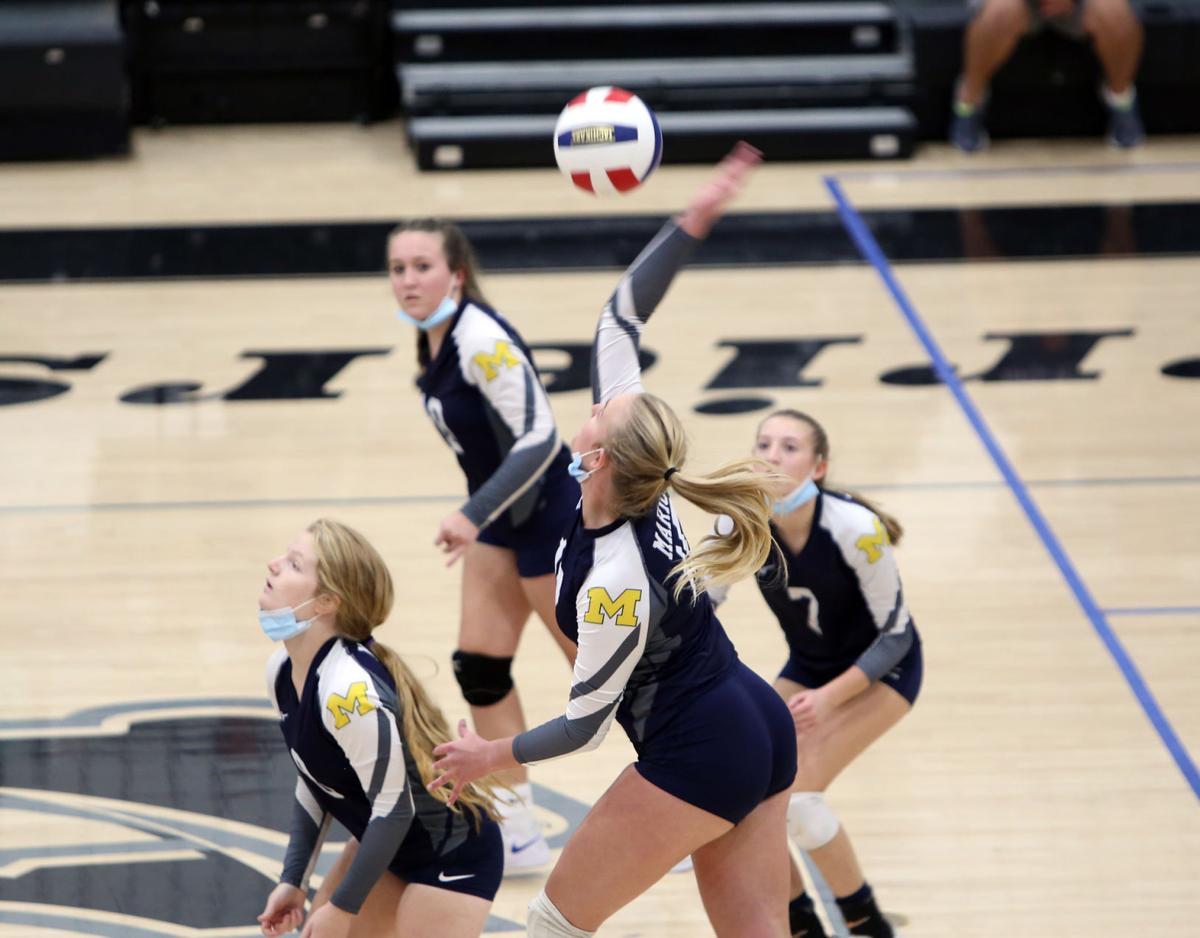 Justin Walker For The Southern

CARBONDALE — The swings were heavy both literally and figuratively Thursday night as the Marion volleyball team held off rival Carbondale 25-21, 20-25, 25-20 in a South Seven Conference match.

Marion jumped out to big leads in the first and third sets, only to see Carbondale make big runs in both before holding on. And the script was simply flipped in the middle set.

"Volleyball is really a mental game," said Marion coach Jaime Clark, who is filling in this season as Beth Mitacek enjoys maternity leave. "It's a game of runs and momentum and they really stuck together and cheered each other on. When they lost a few points they didn't cave like they did at the beginning of that second game."

Marion is now 11-8 overall but unbeaten at 4-0 in South Seven matches.

Carbondale also had a different coach than usual as Mike Horton filled in for Fae Ragan and saw his team drop to 9-7 overall and 0-2 in the South Seven.

"It seems like in the first and third set we started off really slow," Horton said. "Marion scored a lot of points early and the girls kind of got in their head after that. We brought it back but just couldn't finish it."

In the first game, Marion setter Haylee Lambert sent over a push kill and then served a pair of aces at the line to give the Lady Wildcats a quick 8-3 lead that grew to 13-5 after a pair of kills by senior Addi Wall.

Marion's lead was at 17-8 following a kill from another senior, Lily Garrett, but the Terriers chipped away and tied it at 18 on a big smash by Sierra Sherrill.

Marion stayed in front, however, with the help of aces by libero Ava Wong and junior Bailey Williams. After a timeout, Marion got the final point on a kill from Sophie Shrum.

Carbondale then jumped out to a 10-5 lead in the second game and was ahead 14-7 after another Sherrill slam. Senior Carleigh Stearns served two aces as the margin grew to 21-12 with a kill by Stella Ingram.

Marion went on a run with kills from Wall and Garrett to pull as close as 23-20, but the Terriers got a tip kill from setter Brooke Williard and then forced a third when Garrett hit one off the tape.

That momentum swung back to Marion's side as the Lady Wildcats blasted out to leads of 8-0 and 9-1, only to see Carbondale get as close as 16-15.

But the Terriers never tied or went in front. Marion got an ace from Gabby Shrum and big kills from Williams and Wall to push the lead back to 22-17.

Carbondale's Avery Summerlin, Sherrill and MeiKayla Graham all put down spikes to keep the Terriers close. Sophie Shrum knocked down a kill to stop that run, then arguably the biggest play of the match came when Wall and fellow senior Camri McReaken put up a stuff block to bring match point.

Marion sealed the win when Graham sent a spike off the top of the net and out of bounds.

Sherrill tallied 13 kills and Graham had 10 kills along with 19 digs for the Terriers. Williard collected 36 assists and Bria Sisk had 17 digs. Stearns served up three aces.

"They have several big hitters and players that we're used to seeing for the last several years," Clark said. "We know how good they can be. The key is getting them out of their system with aggressive serving and being aggressive with our own hitting. Even if you get blocked, you've got to keep swinging and find the spots so you can keep them on their toes and keep their big hitters out of it a little bit."

Garrett and Wall both finished with seven kills, while Williams had six kills and 13 digs. Sophie Shrum had four kills and 11 digs and twin sister Gabby had 10 digs. Wong was marked for 20 digs and Lambert had 22 assists and three kills. McReaken notched three blocks.

"We've been playing really well together," Clark said. "I think we love coming in as the underdogs. That's a good feeling for us."

Sports Column | Les Winkeler: Who's to blame for the demise of the Miners?

Through tears, Mike Shildt thanks Cardinals organization and mentors, acknowledges but does not detail 'differences'

Cardinals fired Shildt, after three consecutive years in the playoffs, on Thursday due to what the team said was a 'philosophical difference,' and officials said it was up to him to reveal those.

CARBONDALE — The showdown turned into a rout.

Sign of the times: Despite being No. 1 nationally, Cards have lost nearly half their TV households from six seasons ago.

DU QUOIN — On a cold and rainy Friday night at Van Meter Field, Nashville took over the game in the second quarter to beat Du Quoin 37-14, to …