Become a Member
Read Today's E-edition
Share This
Tailgating, face-painted fans back in force at NFL stadiums
0 comments
Share this

Tailgating, face-painted fans returned in full force at stadiums around the country as the NFL opened its doors to capacity for the first time since the coronavirus pandemic.

Some wore masks, some didn't. Some are vaccinated, some aren't.

Restrictions varied in different cities with the Seattle Seahawks, Las Vegas Raiders and New Orleans Saints the only teams requiring fans to provide proof of vaccination to enter.

The defending Super Bowl champion Tampa Bay Buccaneers welcomed 65,566 fans Thursday night to kick off the season and 15 teams were set to host more than one million fans in Week 1.

Fans are back as COVID-19 surges because of the delta variant. President Joe Biden has a proposal to require that companies with more than 100 employees vaccinate their workforce and he will also mandate shots for executive branch workers and federal contractors with no testing opt-out.

In Nashville, fans were tailgating in the usual spaces outside Nissan Stadium before the Titans hosted the Arizona Cardinals. No proof of vaccination or recent negative COVID-19 test were required of fans. Masks were only encouraged inside suites and other enclosed spaces but not required. The only exception to that is postgame for reporters around players and coaches.

The field on opposite sides between the 15 and 5 featured the words "WELCOME BACK."

Judy Maag of Hohenwald, Tennessee, had tickets for the 2020 season only to sell them when the pandemic hit. She has been coming to Titans' games for the past five seasons and was racing to her seats in the upper deck Sunday.

"It feels great and I hope we win," Maag said.

In Buffalo, fans who are not fully vaccinated must wear a face covering at all times. Masks are required regardless of vaccination status when visiting the indoor settings at Highmark Stadium. Unvaccinated guests may remove their mask only when eating or drinking. Seating will not be designated by vaccination status.

The team sent a letter to ticket holders recommending they get through the gates earlier than normal, and that they were opening the gates at 11 a.m., a half hour early.

Outside the stadium, it was back to normal after fans weren't allowed to attend Bills home games during the regular season last year, and only about 6,600 were allowed in for the playoffs. The private lots around the stadium were already filling up by 8 a.m.

Jeff Boyst made his annual trip from North Carolina to watch the Bills play the Pittsburgh Steelers.

"I think it's time to get back out in the public and take my chances. I've been vaccinated," said Boyst, who was attending a tailgate party across the street from the stadium more than fours before kickoff. "But I'm here willing to take the chances to resume life and try to get back to normal. And this is a tradition that I've missed. I drove 600 miles just to be here and to be back to normal, and support the Bills, support the community that I grew up in. And like so many of us, we've left New York to end up somewhere else. Our hearts are still here."

Bill Langdoa traveled from Long Island, New York, to North Carolina to watch Zach Wilson make his NFL debut with the Jets against Sam Darnold and the Carolina Panthers.

"We've been waiting a long time for this," Langdoa said. "We were at Game 6 of the Islanders against Tampa Bay and that was completely packed. We're vaccinated. We feel pretty comfortable."

Masks weren't required but recommended in the stands at Atlanta's Mercedes-Benz Stadium and they were required in any indoor area.

Dustin Faircloth came with his wife and two children without masks, unaware of protocols.

"I was hoping they weren't requiring it or I was in trouble," Faircloth said.

The two-time AFC champion Kansas City Chiefs expected more than 75,000 fans for their late afternoon game against the Cleveland Browns. Masks were only required inside club suites.

"Our objective is the same objective that we had last year: How do we create a safe environment for our fans?" Chiefs President Mark Donovan said. "We are not experts in the COVID space, we are not experts in the vaccination space and testing space, so we'll have to work with experts on that. I will say this, as an organization we fully support full vaccination. We think it's the safest way for all of us, and we have promoted that."

"Last year, it felt like a Massachusetts high school football game, where there was little bands in there. Now we're getting back to how we used to be, just embracing every opportunity to be out there on the field competing," Patriots linebackers coach Steve Belichick said. "Last year, it was humbling not being out there with the fans. I'm sure they wanted to be there. We wanted them there. But that didn't take away from our intensity in our preparation and our effort and all that type of stuff."

Watch now: Shildt thanks the Cardinals players, owners and coaches 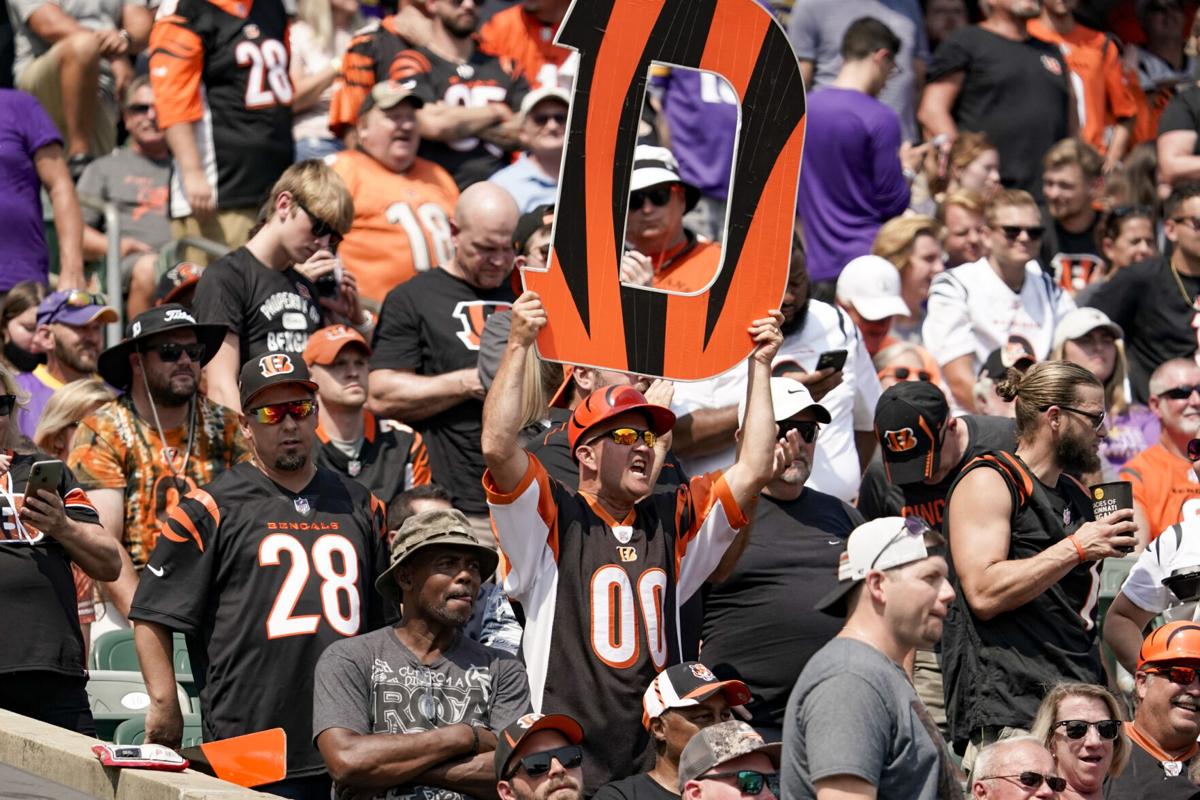 Cincinnati Bengals fans cheer during the first half of an NFL football game against the Minnesota Vikings, Sunday, Sept. 12, 2021, in Cincinnati. (AP Photo/Jeff Dean) 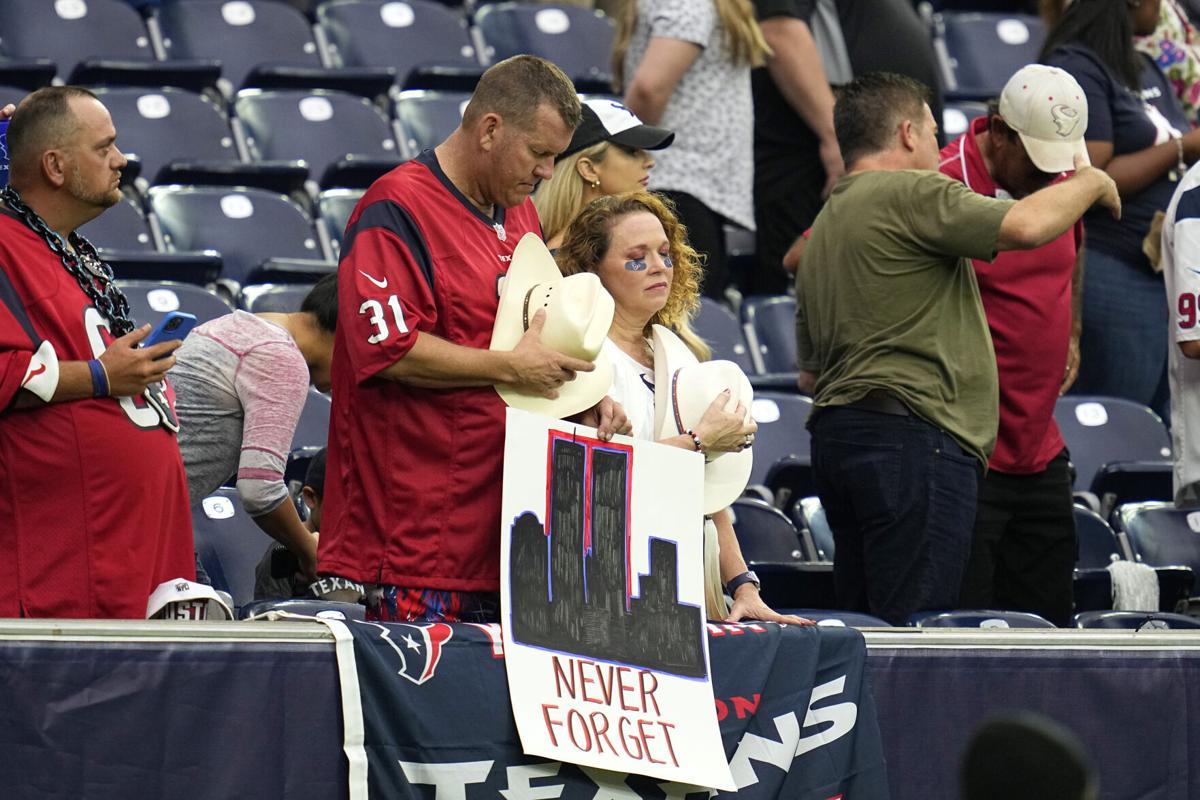 Houston Texans fans bow their heads during a 9/11 memorial video before an NFL football game against the Jacksonville Jaguars Sunday, Sept. 12, 2021, in Houston. (AP Photo/Sam Craft) 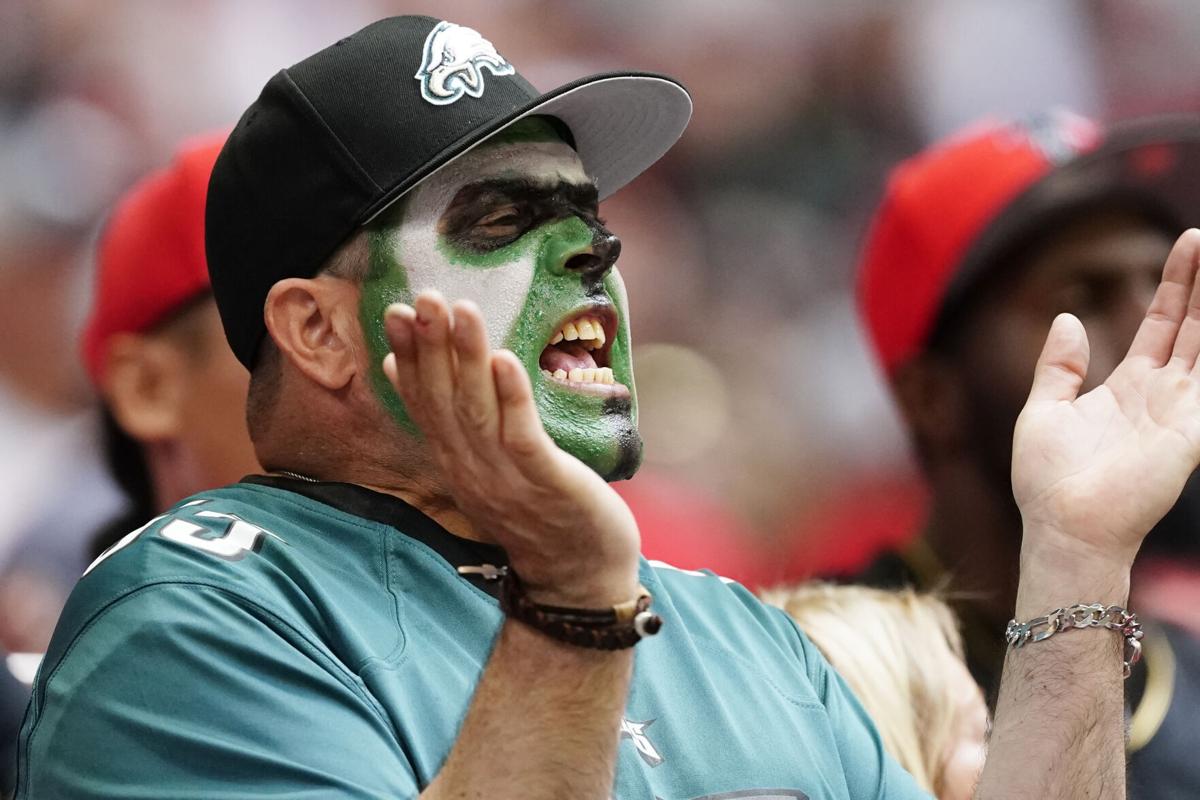 A Philadelphia Eagles fan cheers during the first half of an NFL football game against the Atlanta Falcons, Sunday, Sept. 12, 2021, in Atlanta. (AP Photo/John Bazemore) 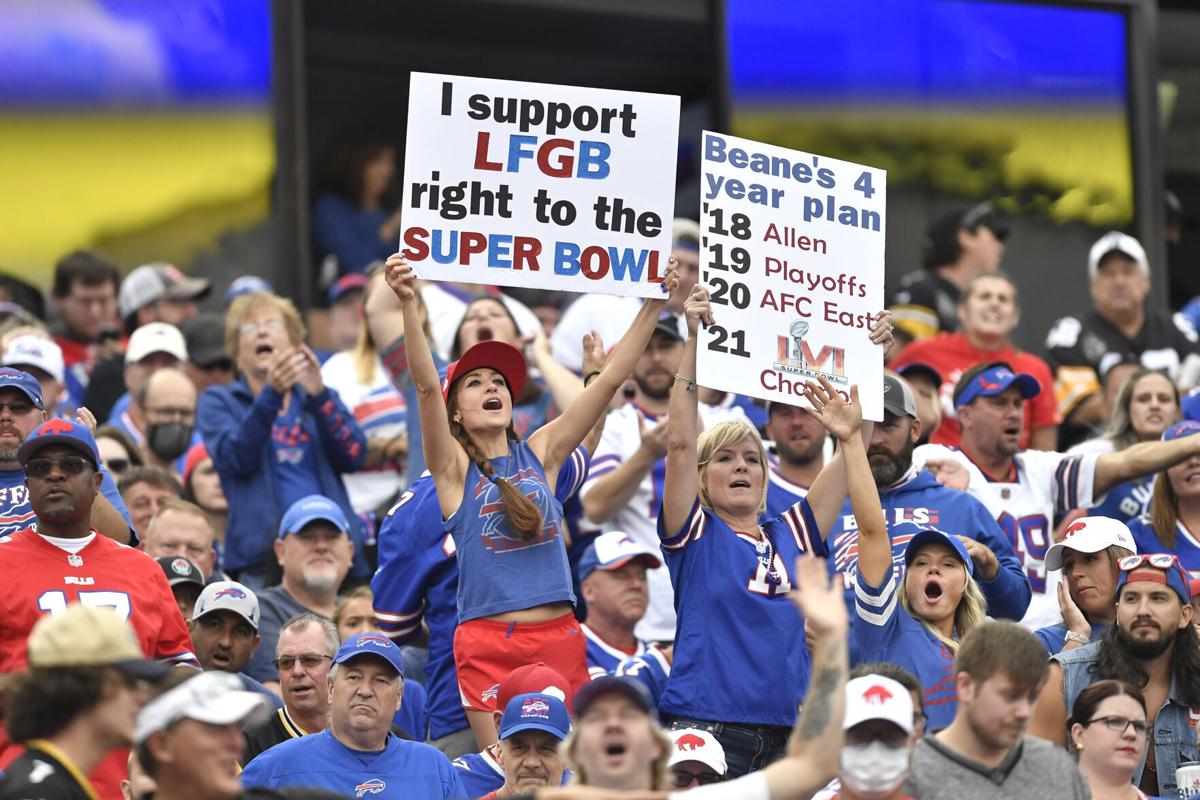 Fans cheer during the first half of an NFL football game between the Buffalo Bills and the Pittsburgh Steelers in Orchard Park, N.Y., Sunday, Sept. 12, 2021. (AP Photo/Adrian Kraus) 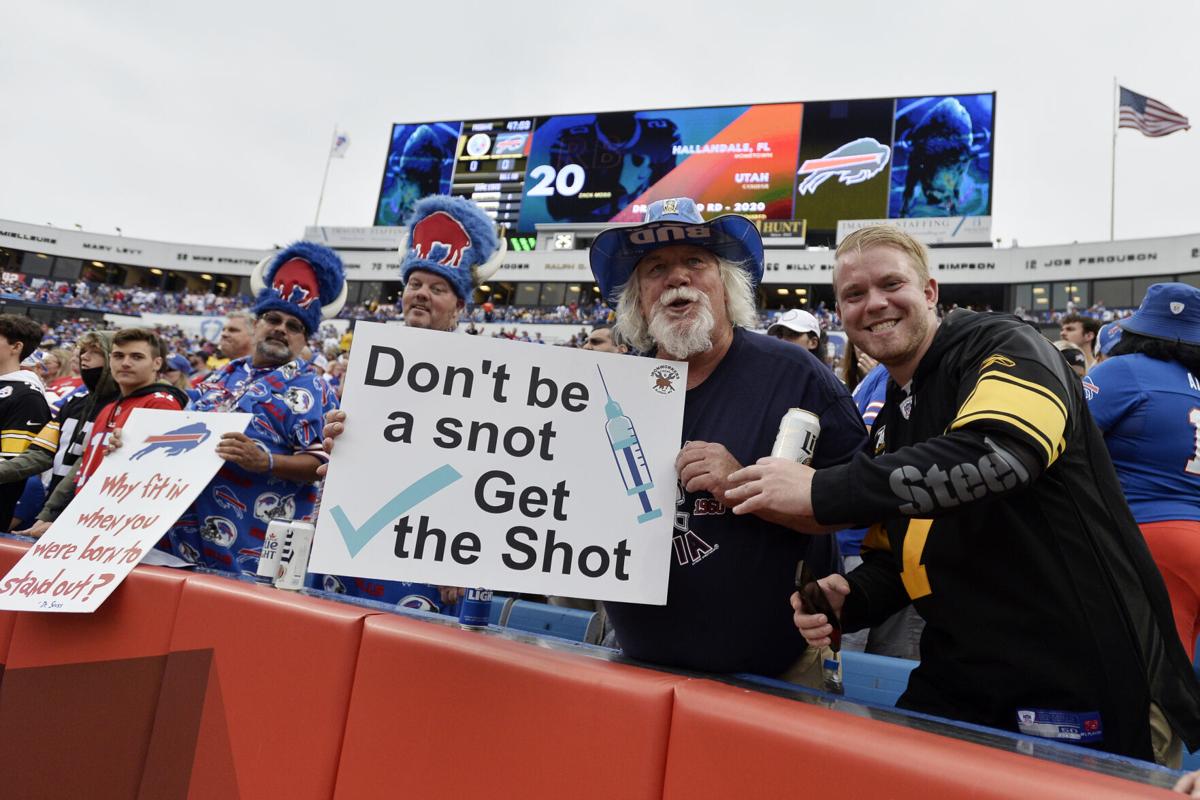 Fans holds signs during the first half of an NFL football game between the Buffalo Bills and the Pittsburgh Steelers in Orchard Park, N.Y., Sunday, Sept. 12, 2021. (AP Photo/Adrian Kraus)