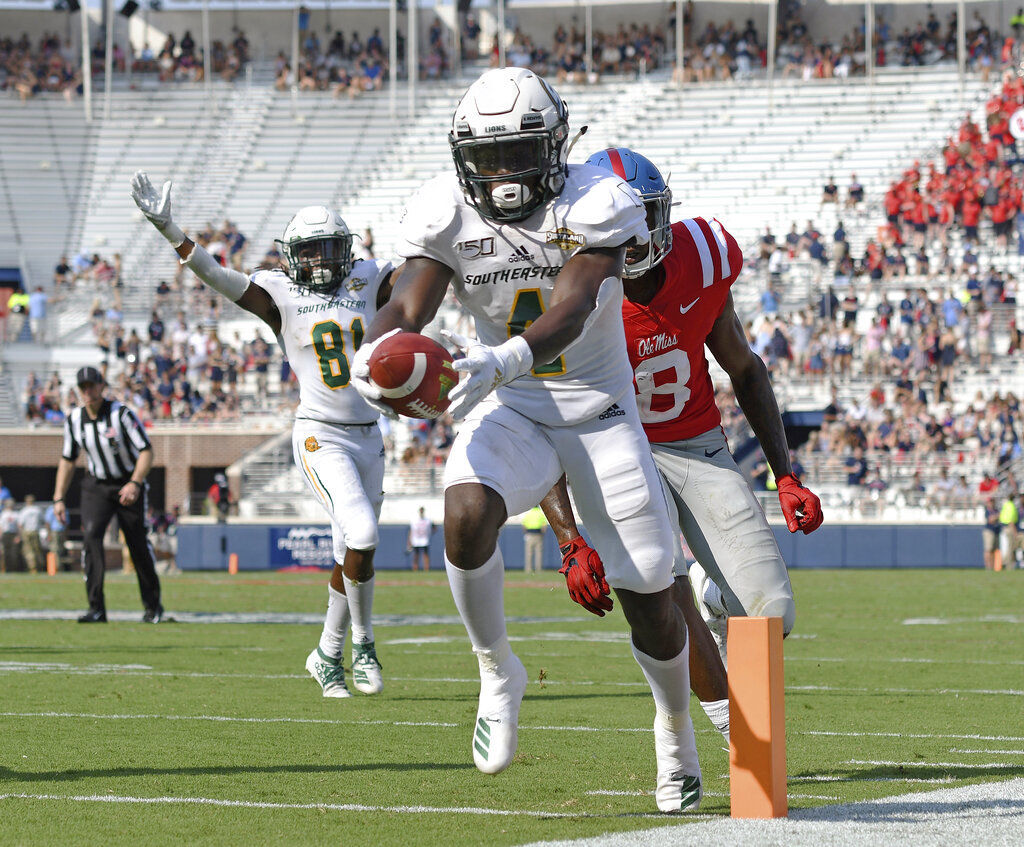 Southeastern Louisiana running back Marcus Cooper (4) stretches for a touchdown past Mississippi defensive back C.J. Miller (8) during the first half of a college football game in September of 2019. Cooper and the Lions take on SIU Saturday in Carbondale. 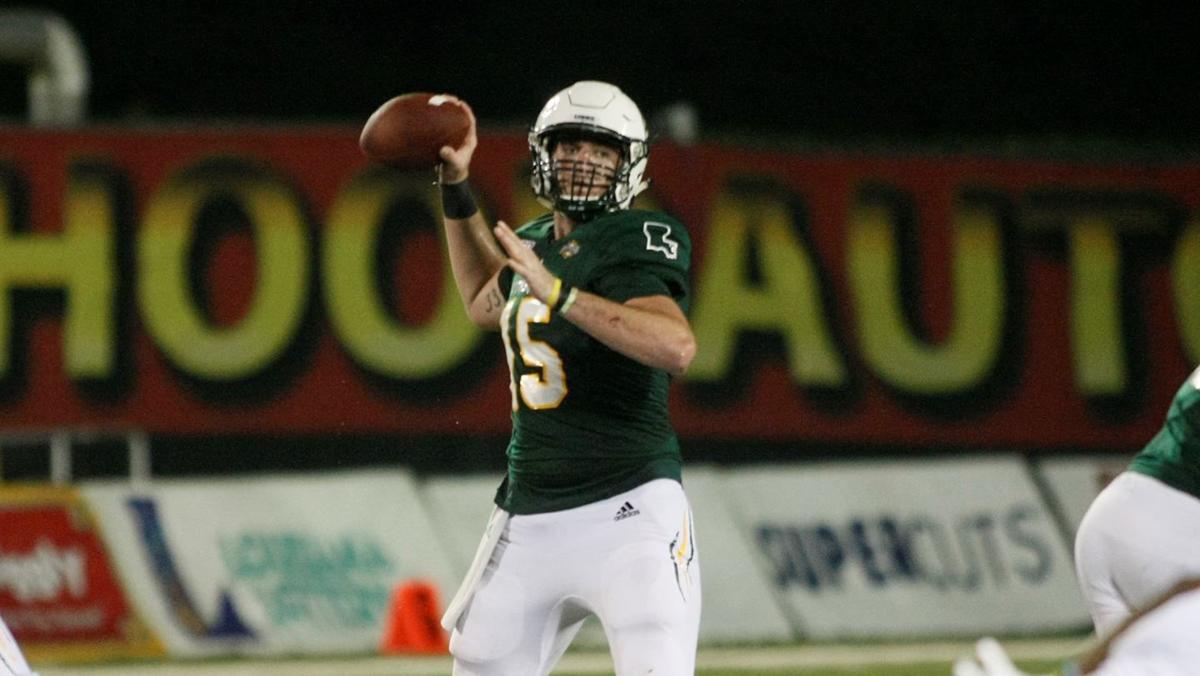 Southeastern Louisiana quarterback Cole Kelley leads the FCS in passing yards, with 2,244 in six games this spring. Kelley's 16 touchdown passes rank fifth-best in the country. Kelley and the 17th-ranked Lions take on No. 18 SIU Saturday in Carbondale. 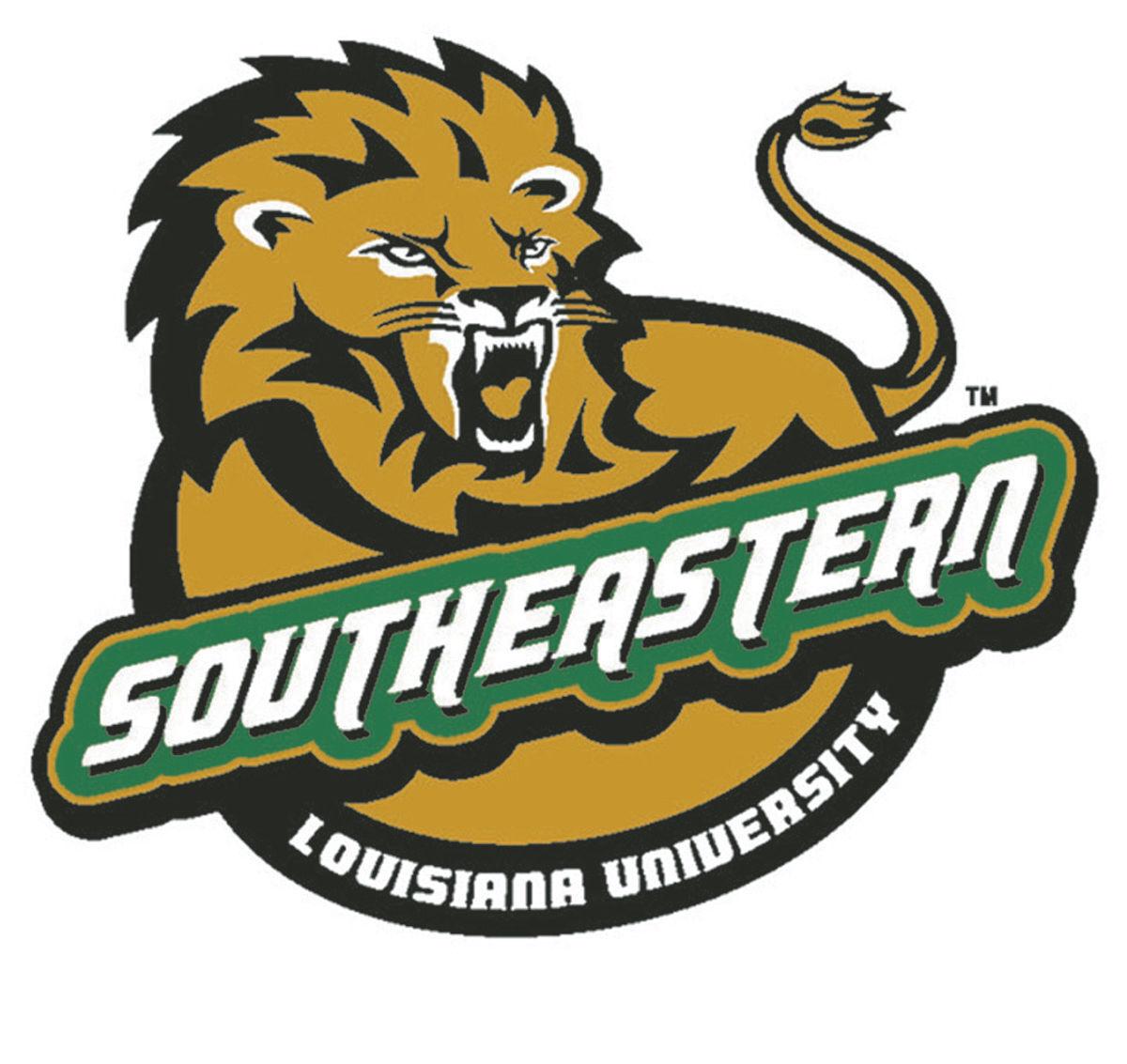 CARBONDALE — Frank Scelfo and his 17th-ranked Southeastern Louisiana football team are going after more than a win Saturday at No. 18 SIU. They're going for a program-changing win.

"We need to decide who we are as a football program, and the university needs to decide who we are as a football program," said Scelfo, the 2019 Southland Conference Coach of the Year after leading the Lions to the playoffs. "If we want to win the state championship, we did that, but we want to go bigger than that. We want to be in the national scene on a regular basis, and to do that we gotta go on the road and win some of these games. Going to Montana last year was one of those games, it was important. This game is equally important for us in the future."

The Lions (4-2, 4-2 Southland) trail undefeated and fifth-ranked Sam Houston State (5-0) in the Southland standings but hope another top 25 road win can get them into the FCS playoff picture. The Salukis (4-3, 3-3 Missouri Valley Football Conference) hope for the same if they're able to win Saturday in their regular-season finale.

Not many teams go to Thibodaux, Louisiana, and beat previously-ranked Nicholls, Scelfo said at his weekly media luncheon Monday. The Lions trailed 24-17 at the half but came back to win 52-45. Quarterback Cole Kelley, a 6-foot-7, 260-pound senior who leads the FCS in passing yards (2,244), completed 30 of 41 attempts for 391 yards and four touchdowns in the victory. His 16 touchdown passes in six games rank fifth-best in the country, and Kelley may not have even broken a sweat yet this season.

Southeastern Louisiana has cleared the 40-point barrier in three straight games, losing 56-45 at Incarnate Word and beating Lamar 42-12. The Lions put 38 on Sam Houston State and lost by five. They are ninth in the country in offense (38.2 points per game) and 82nd in scoring defense, allowing an average of 33.3 points per game.

"Against Incarnate Word, they snapped the ball 109 times. That's incredible" SIU coach Nick Hill said. "That's a lot of snaps, and Incarnate Word probably snapped it over 100 times, and they went fast, and it was probably 50-something to 40-something. Some of the games that they've been in have almost been like Arena-type games."

The Lions don't play at a Baylor-type speed, either, although they can push the tempo in late-game situations. They have rushed for only eight touchdowns all season, and thrown for 19. Kelley has been picked off only four times in 263 attempts, and has four of the team's eight rushing touchdowns. Some of SIU's most experienced players on defense are in the secondary, with senior safety Qua Brown and cornerbacks Jonathan Thompson and James Ceasar, but the Lions may go after them no matter what on Saturday.

"I'm not trading Cole Kelley for anybody. I just think Cole's playing at a level right now that is superior to everybody else, and it's because of his preparation, his maturity, what goes in, his leadership," Scelfo said. "All the things that people don't always even see. You see the product on the field, but you look at his numbers and what he's done... even the four interceptions, three of them were off receivers' hands. One was taken out of the receiver's hands.

"The decision-making has been really good from his standpoint. Where he's at, I just think he's playing at the highest level he can play at, and I hope people in this country get to see him in the playoffs."

CARBONDALE — SIU football coach Nick Hill and his team were excited to get ready for a game that almost didn't appear on Monday.

CARBONDALE — When SIU's football team needed another defensive tackle, it turned to a defensive end the size of one at Missouri State two weeks ago.

CARBONDALE — After its last two regular-season opponents opted out, SIU's football team has added Southeastern Louisiana to its spring schedul…

Western Illinois pulls out of final 2 football games, including Saturday at SIU

CARBONDALE — Western Illinois has pulled out of Saturday's football game at No. 16 SIU, as well as its make-up game that was scheduled at Sout…

Saluki Football | 3 things to watch in No. 17 Southeastern Louisiana/No. 18 SIU

Saluki Stadium hasn't ever hosted a playoff game, but Saturday's game between 17th-ranked Southeastern Louisiana and 18th-ranked SIU will have that feel.

Southeastern Louisiana running back Marcus Cooper (4) stretches for a touchdown past Mississippi defensive back C.J. Miller (8) during the first half of a college football game in September of 2019. Cooper and the Lions take on SIU Saturday in Carbondale.

Southeastern Louisiana quarterback Cole Kelley leads the FCS in passing yards, with 2,244 in six games this spring. Kelley's 16 touchdown passes rank fifth-best in the country. Kelley and the 17th-ranked Lions take on No. 18 SIU Saturday in Carbondale.