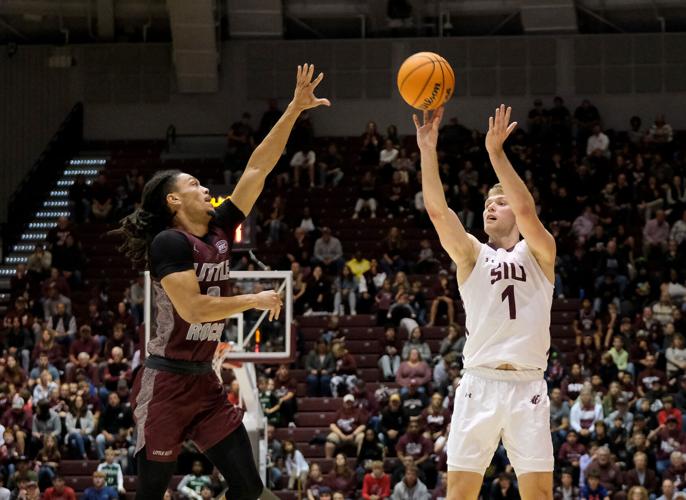 SIU forward Marcus Domask (1) shoots a three-pointer over Little Rock guard Isaiah Palmero (3) during the first half at the Banterra Center on Monday in Carbondale. 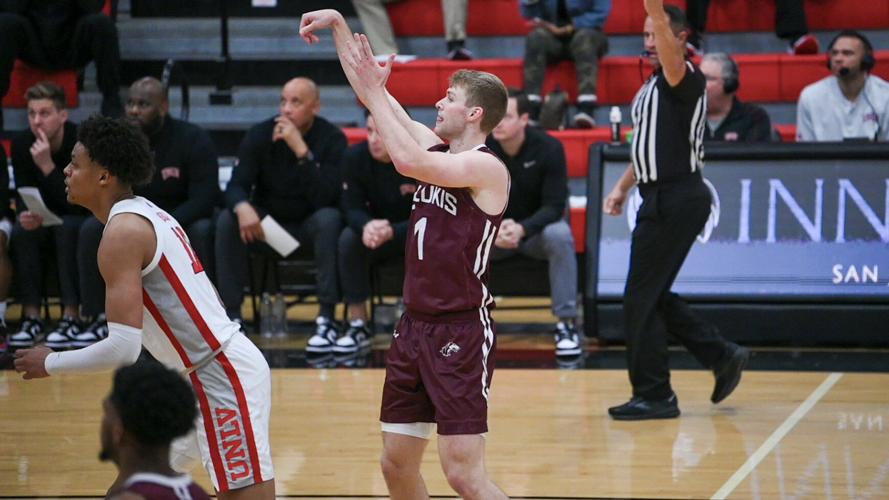 SIU's Marcus Domask shoots during their game against UNLV on Nov. 22. 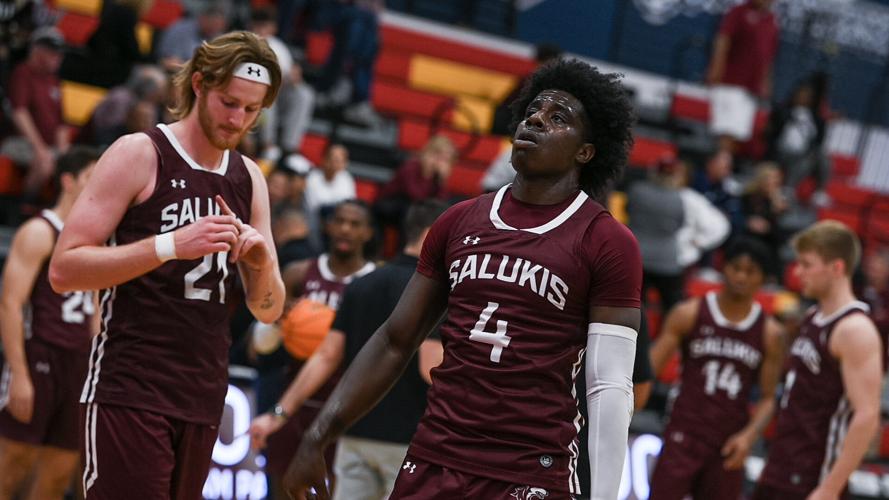 SIU's Cade Hornecker (21) and Clarence Rupert (4) look exhausted during a game against UNLV game on Monday.

“We can’t just leave him stranded when he’s out there in the post,” Jones said. “We’ve got to make cuts to get freed up off him.”

Domask finished with 21 points, six rebounds and four assists while playing six seconds shy of a full 40 minutes. But it wasn’t enough to prevent another long second half drought from costing the Salukis in a 56-49 loss to unbeaten UNLV at the SoCal Challenge.

Domask scored their next bucket, too. At the 2:23 mark, nearly eight minutes after the last one.

“I was disappointed we couldn’t take care of the ball any better,” said SIU coach Bryan Mullins. “I’ve got to do a better job of helping our guys make better decisions and get cleaner looks.”

The Salukis failed to score on nine consecutive possessions during the game-changing skid, committing four turnovers in that span. They finished the game with 21, giving them 53 in their last three games.

It’s the continuation of a trend that’s looking a lot like last year, when SIU often dealt with long stretches where it couldn’t score. In its last four games, it has averaged just 55 ppg, with 49 establishing a new season low.

While UNLV forces nearly 24 turnovers per game, the Salukis have run into turnover problems against everyone but Oklahoma State, which was probably the longest, most athletic opponent of the first five they’ve faced.

“We’ve had too many turnovers the last three games,” Mullins said. “As a staff, we have to figure out ways to put the guys in positions where they’re not turning the ball over. I think as our guys continue to play with each other, we’ll be better taking care of the ball.”

SIU’s other issue after halftime was first-shot defense. UNLV was able to hurt it with straight-line drives, canning 13 of 22 field goals in the second half. That was a marked departure from a first half where the Salukis cut off driving lanes and hassled the Rebels into 10 of 29 shooting, including 3 of 10 from 3-point land.

Jones said that SIU might have been guilty of not sticking with the game plan.

“We didn’t get the necessary stops that we needed,” he said. “They were being aggressive and getting into the paint in the second half. We could have stayed in our gaps and helped a little bit more, but they came out with more aggression the second half.”

Keshon Gilbert scored 18 to pace the Rebels, which play Minnesota for the tournament title Wednesday night at 9:30. Harkless added 16 and Luis Rodriguez chipped in 14 points.

This might have been the latest-starting game in recent SIU history. Because Minnesota and Cal Baptist went overtime in the tournament opener, tip time was moved back to 10:19 p.m. Pacific Time. … The Salukis shortened their bench to just Dalton Banks, Clarence Rupert and Jawaun Newton. Foster Wonders went DNP-CD for the second straight game, while AJ Ferguson and Cade Hornecker rode the bench for 40 minutes as well. SIU used more smallball lineups because UNLV used a four-guard alignment most of the night. … The result drops the Salukis into another midnight (or so) start late Wednesday night against Cal Baptist in the third place game.

SIU shot 45 percent for the game, but that was a steep drop after going 12 of 19 in the first half. It went 9 of 28 from 3, thanks largely to a 3 of 15 performance in the second half. Marcus Domask did yeoman work with 21 points, but no one else got to double figures and only five other players scored. There were too many turnovers with 21 and there was another stagnant second half that featured a costly scoring drought of nearly eight minutes.

The Salukis were excellent in the first half but not good enough in the second half. They guarded fiercely and kept UNLV from hurting them on the offensive glass during the opening 20, allowing just 34.5 percent shooting. But the Rebels hurt them on straight-line drives during a 13 of 22 second half that allowed them to rally for the win. SIU forced 15 turnovers and earned a 29-28 edge on the glass, with Clarence Rupert getting seven in 19 minutes.

If one had to select a phrase to describe this game, missed opportunity would fill the bill. UNLV is 5-0 with a win over then-No. 22 Dayton last week, but the Salukis owned an 11-point first half lead. However, too many empty possessions because of turnovers took their toll and SIU lost a chance to earn a second Power 5 win against Minnesota. Now it has to play a Cal Baptist team that almost took the Golden Gophers down Monday night.

BENTON — One of the best high school golfers in Southern Illinois history has selected his college of choice to continue his career in the sport.

The games won't count in the league standings just yet, but changes are underway within the South Seven Conference - at least in football.

Boys Basketball | Local smaller conferences should be competitive this season

The Black Diamond Conference West Division race is shaping up to be a good one this season with league coaches pointing to the Vienna Eagles and Johnston City Indians as the teams to beat.

DU QUOIN — Tournament favorite, Herrin, jumped out to a 23-2 lead after one quarter of play Monday and waltzed past Cairo, 72-23, in the openi…

HERRIN — Their record may not show it yet, but the Benton Rangerettes will be a force in girls basketball this season.

The Herrin Tigers moved to 2-0 in the Du Quoin Tip-Off Classic this week and 3-0 on the season Friday after romping past West Frankfort, 82-24.

Behind the Scenes - At the World Cup media hub

Behind the Scenes - At the World Cup media hub

Tunisia our inspiration says USA captain ahead of Netherlands match

Tunisia our inspiration says USA captain ahead of Netherlands match

SIU forward Marcus Domask (1) shoots a three-pointer over Little Rock guard Isaiah Palmero (3) during the first half at the Banterra Center on Monday in Carbondale.

SIU's Marcus Domask shoots during their game against UNLV on Nov. 22.

SIU's Cade Hornecker (21) and Clarence Rupert (4) look exhausted during a game against UNLV game on Monday.