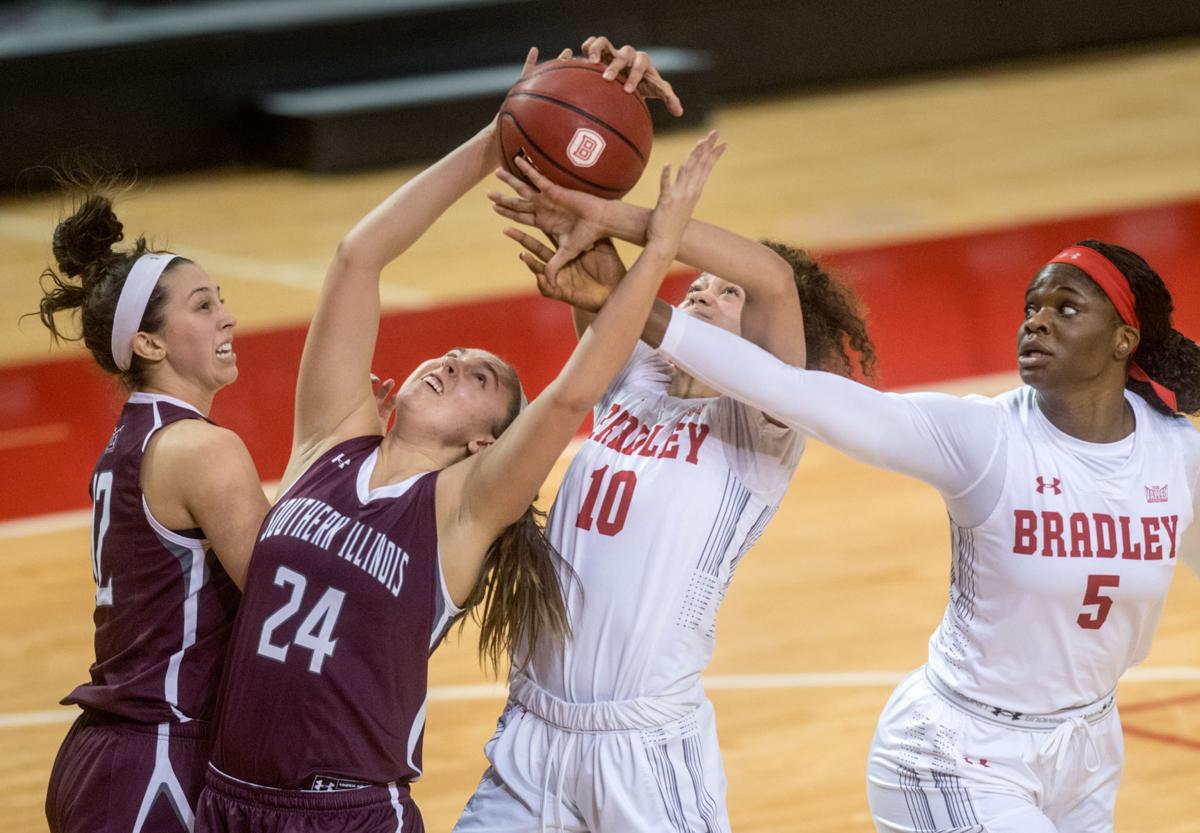 SIU’s Adrianna Katcher (24) and Makenzie Silvey, far left, battle for a rebound with Bradley’s Mahri Petree (10) and Uche Ufochukwu in the first half Friday at Renaissance Coliseum in Peoria. 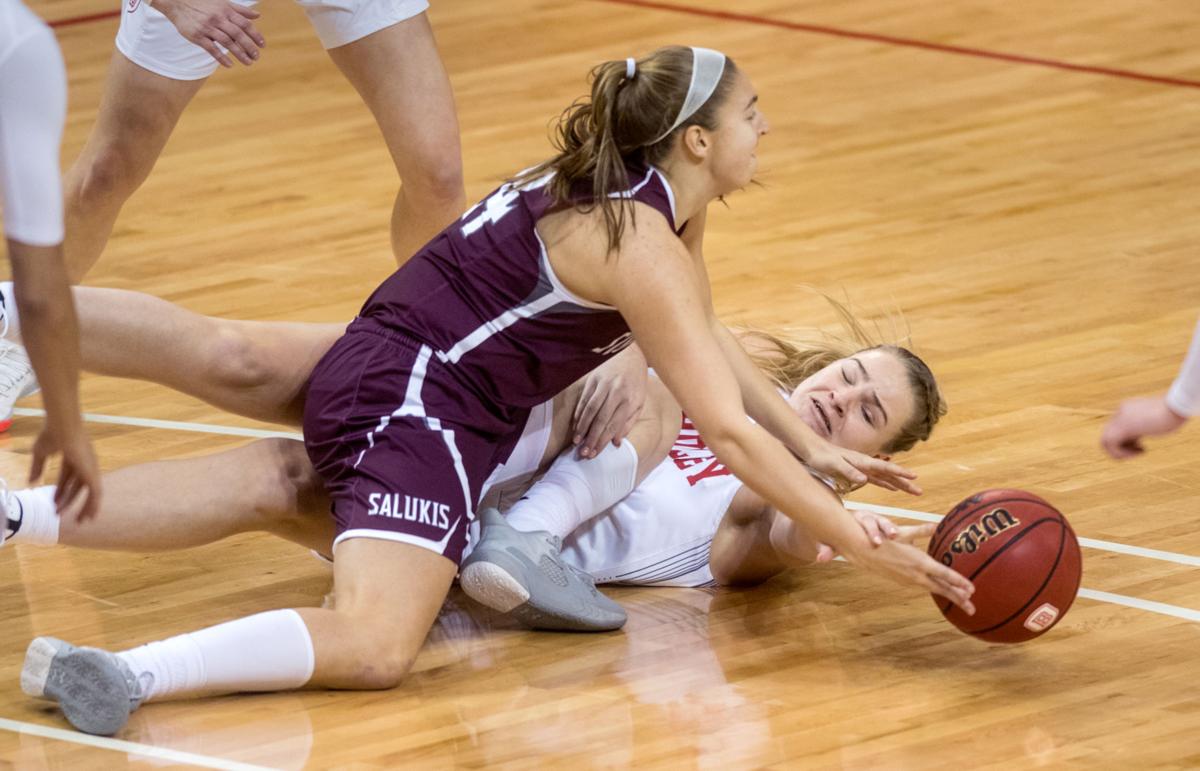 SIU’s Adrianna Katcher (24) and Bradley’s Emily Marsh tangle on the court for a loose ball in the first half Friday at Renaissance Coliseum in Peoria.

PEORIA — They unveiled virtual versions of the Anthem and starting lineups Friday night at Renaissance Coliseum.

On the other hand, the 77-55 beatdown SIU absorbed from Bradley was the real thing.

There was just one word coach Cindy Stein and her players could use to correctly describe it.

“Disappointed,” Stein said after the Salukis dropped to 5-3 overall and 2-1 in the Missouri Valley Conference. “They made shots early, we didn’t make our shots early and we were just chasing our tails the rest of the game.”

SIU never led and played uphill all night. Even when it made a solid run to start the second quarter, cutting a 20-9 deficit to 24-20 on Gabby Walker’s layup off a great Quierra Love feed at the 6:46 mark, there was a sense the Braves (6-4, 2-1) were simply more connected, more dangerous, more aggressive.

Bradley put its stamp on the game right away. It scored on its first four possessions, forcing Stein to call a timeout before her team even scored. The lead grew to 15-0 before Payton McCallister finally got SIU on the board with a runner.

Not even the quick insertions of seniors Abby Brockmeyer and Makenzie Silvey, who returned to the team after missing last weekend’s sweep of Evansville, did anything to change momentum.

Silvey scored a team-high 13 points in 17 minutes and Brockmeyer contributed a team-best eight rebounds in 21 minutes, but this wasn’t close to the same outfit that earned consecutive 18-point victories last weekend.

“This one is on me,” Stein said. “We weren’t prepared like we should have been. They punched us in the mouth. Take nothing away from Bradley, they’re a good team. But we just weren’t tough enough.”

When the Salukis made their one serious push, the Braves simply continued to execute and get the shots they wanted. When they missed those shots, they just whipped SIU for second chances and 50-50 balls.

In one sequence at the halfway point of the quarter, Gabi Haack missed and Mahri Petree missed. Petree was quicker to her missed shot and converted the third chance. Bradley outboarded the Salukis 37-23, allowing just four offensive boards.

The Braves scored on their last four possessions of the half to make it 40-26 at intermission. When SIU pulled within 12 twice in the third quarter, Bradley promptly scored on six of its final seven trips of the period to increase the cushion to 59-41.

MVC Preseason Player of the Year Lasha Petree scored a game-high 23 points for the Braves, while Haack hit for 14 and Tatum Koenig netted 10 points. Bradley committed only seven turnovers and canned 50 percent of its shots.

McCallister finished with 10 points for the Salukis, whose only real highlight was 20 of 26 foul shooting. In a stat that best explains the game’s one-sided nature, SIU took just 39 shots from the field. The Braves made 30.

The best news for the Salukis: They have less than 24 hours to stew over this stinker. They get a chance to split the series with Bradley at 4 p.m. Saturday.

“I think everyone on our team would tell you that they are disappointed in our performance tonight,” Stein said. “We are a much better team than we looked.”

DAWG BITES: Freshmen starters Love and Adrianna Katcher looked like freshmen in this one. Love was scoreless with five turnovers in 22 minutes and Katcher managed just two points and three boards over 25 minutes. … SIU’s starting lineup managed just 23 points and eight rebounds. … Rachel Pudlowski was one of the few Salukis who could be termed as energetic, collecting nine points and four boards in her 13 minutes.

SIU’s Adrianna Katcher (24) and Makenzie Silvey, far left, battle for a rebound with Bradley’s Mahri Petree (10) and Uche Ufochukwu in the first half Friday at Renaissance Coliseum in Peoria.

SIU’s Adrianna Katcher (24) and Bradley’s Emily Marsh tangle on the court for a loose ball in the first half Friday at Renaissance Coliseum in Peoria.