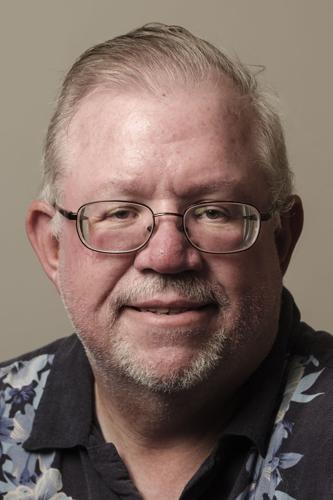 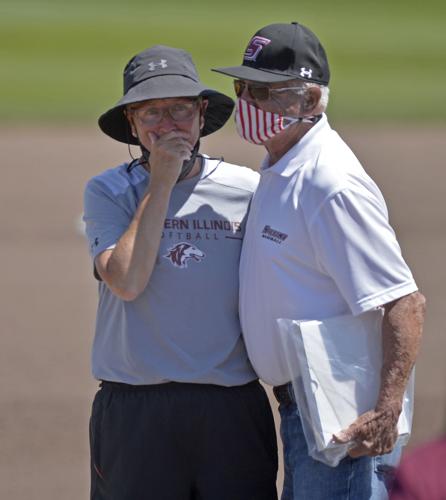 SIU head coach Kerri Blaylock (left) is surprised by former SIU baseball coach Itchy Jones with a plaque prior to the first game of a doubleheader against Valparaiso at Charlotte West Stadium on May 1 in Carbondale. Blaylock recorded her 739th win last weekend, surpassing Jones as the winningest coach at SIU in any sport.

It’s fitting, when one thinks about it.

No. 1 will be No. 1 in the SIU baseball program forever.

When former coach Itchy Jones has his Number 1 retired Saturday before the Salukis’ 2 p.m. Missouri Valley Conference home game with Valparaiso, it will mark the first time in program history a number has been retired.

Sports Column | Bucky Dent: Why it was the JV game of rain delays

There was a lot of grousing in the Itchy Jones Stadium press box last Friday.

There’s no better number to be given the honor than Jones’. After all, no coach in program history has won more games than his 738 between 1970 and 1990. No coach in school history had passed 738 until softball coach Kerri Blaylock did it last year.

Jones led SIU to three College World Series appearances in a seven-year span in the 1970s. The Salukis placed second in 1971, then earned third-place showings in 1974 and 1977. His 1974 team won 50 games, a mark no squad has surpassed since.

Just how did Jones do it at a school without the pull or the facilities of Arizona, USC and Miami – three programs that SIU went toe-to-toe with for a good chunk of his tenure here?

“Many good players played at SIU,” he said Friday on his way to Carbondale to watch his first Saluki game of the year. “We really couldn’t out-recruit anyone, but the players seemed to get better as the years went by in Carbondale.”

Jones, who compiled 1,240 career wins when one counts his 474 victories at Illinois and 28 at now-defunct MacMurray College at the start of his career, was scheduled to have his number returned two years ago. But COVID-19 got in the way of that.

There was a basketball coach named Sonny Smith who hailed from Roan Mountain, Tennessee, whi…

However, the pandemic couldn’t outlast Jones’ long-awaited weekend of glory that will be the highlight of Alumni Weekend. Several of his former players are expected to be on hand not just for Saturday’s ceremony, but for the games on Friday and Sunday.

The Salukis enter the weekend tied for first place in the Valley with Indiana State and Evansville. At 29-11 overall and 6-3 in the conference, SIU’s recent surge of wins over good teams like Dallas Baptist, Southeast Missouri State and Evansville has pushed it up to 75 in the latest RPI rankings, giving it a chance at an at-large NCAA tourney bid if it continues its run into May.

Jones keeps up with the team and has given third-year coach Lance Rhodes his stamp of approval.

Sports Column | Bucky Dent: Is SIU what its record says it is?

Years ago, Bill Parcells once said that you are what your record says you are.

“He’s brought in good players and they have bought into his solid coaching,” said Jones, “and that’s important. Sometimes, that’s hard. But Lance has done an outstanding job.”

An SIU infielder from 1957-60, Jones wore No. 1 when he played. When he put it on to start his Saluki coaching career in 1970, he had no way of knowing how successful it would be. He just did what all the great ones do – stack wins on top of each other until he made history.

Jones’ teams didn’t do it against soft schedules, either. He would play anyone, any time, anywhere.

“We played the national powers when I was there,” he said. “We’d play Arizona in the College World Series. We’d open our season every year at Miami. We used to play Oral Roberts, Oklahoma and Arkansas. We tried to play all our road games south of Carbondale.

“I think playing the schedule we did made us better.”

And as the record shows, Jones earned the right to be the only man in program history to have his number retired

Bucky Dent covers SIU sports for The Southern Illinoisan and also votes on the Wooden Award. He can be reached at bucky.dent@thesouthern.com or at 618-351-5086.

Sports Column | Bucky Dent: Jensen's play Tuesday night was one of a kind

The late, great sportswriter Red Smith once opined that baseball was a dull game only to those with dull minds.

Sports Column | Bucky Dent: How the game played the players

I’ve been fortunate enough to get to watch sporting events for free for 41 years and I’ve seen quite a bit.

SIU head coach Kerri Blaylock (left) is surprised by former SIU baseball coach Itchy Jones with a plaque prior to the first game of a doubleheader against Valparaiso at Charlotte West Stadium on May 1 in Carbondale. Blaylock recorded her 739th win last weekend, surpassing Jones as the winningest coach at SIU in any sport.