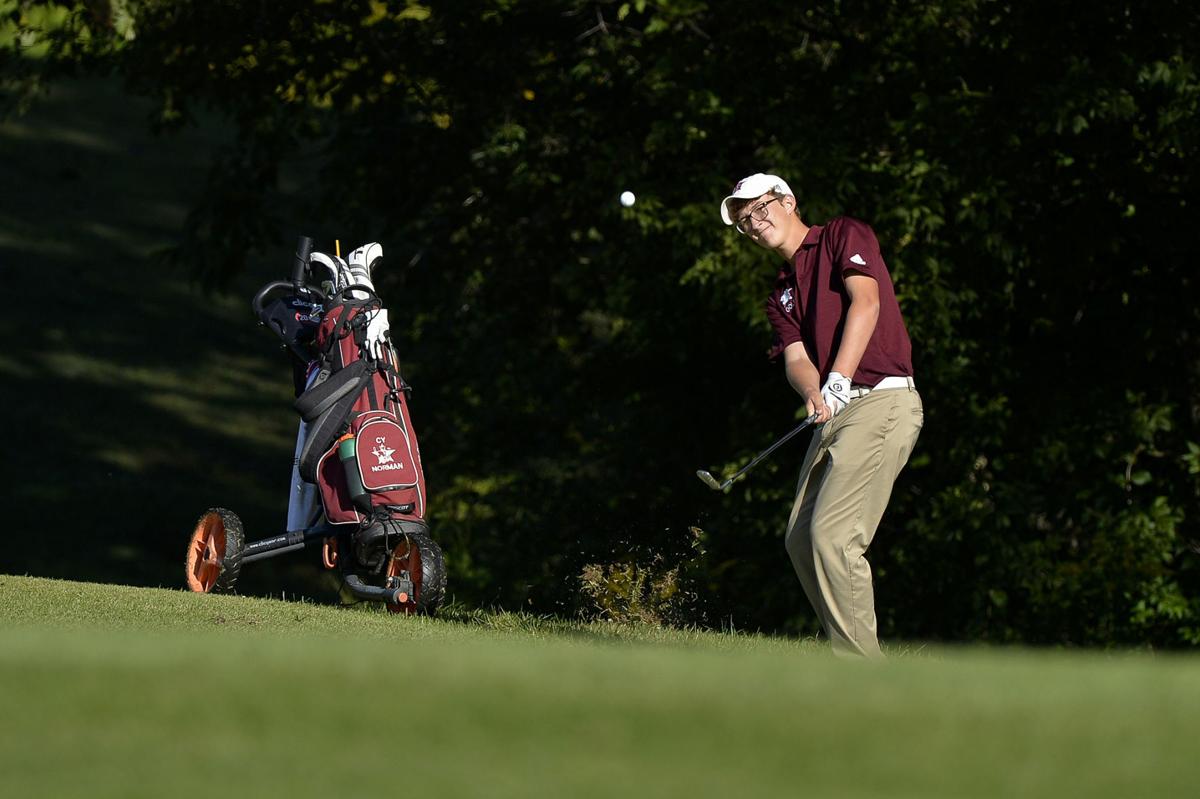 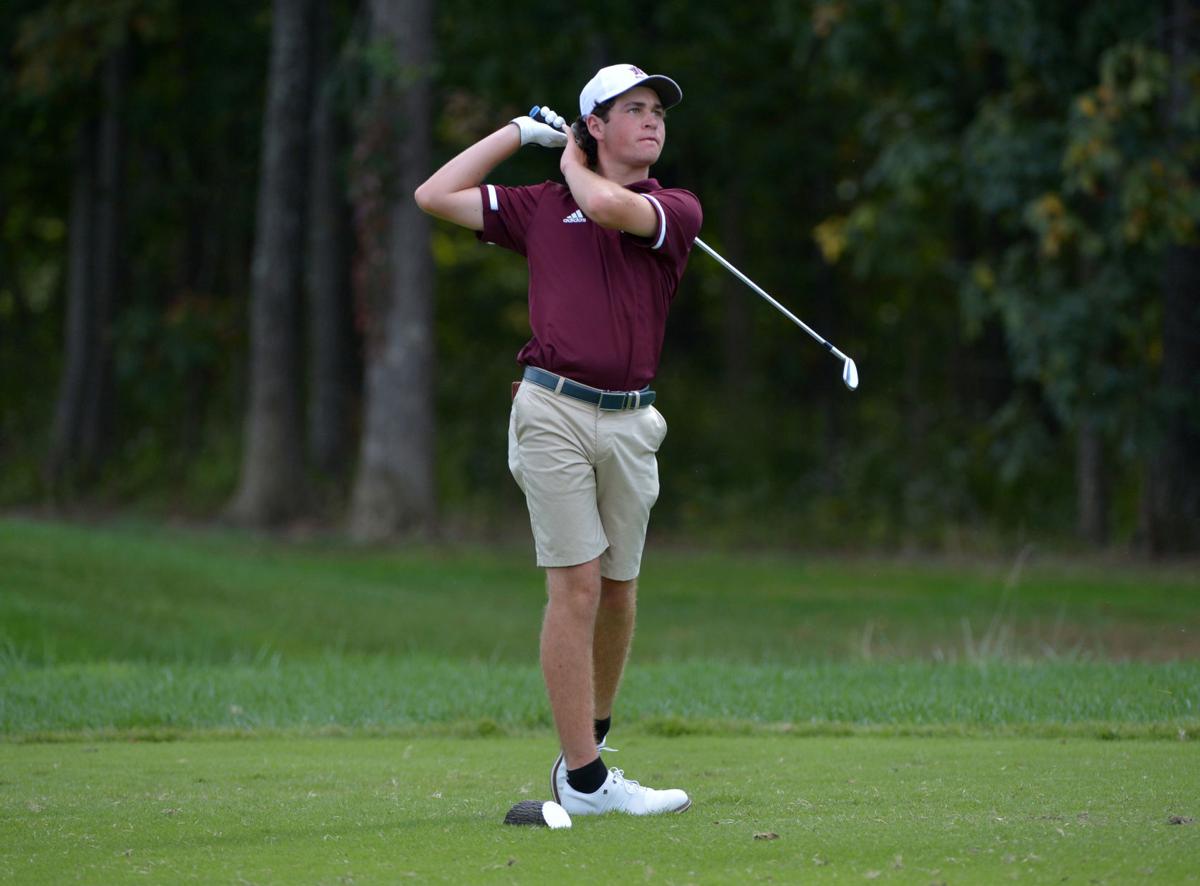 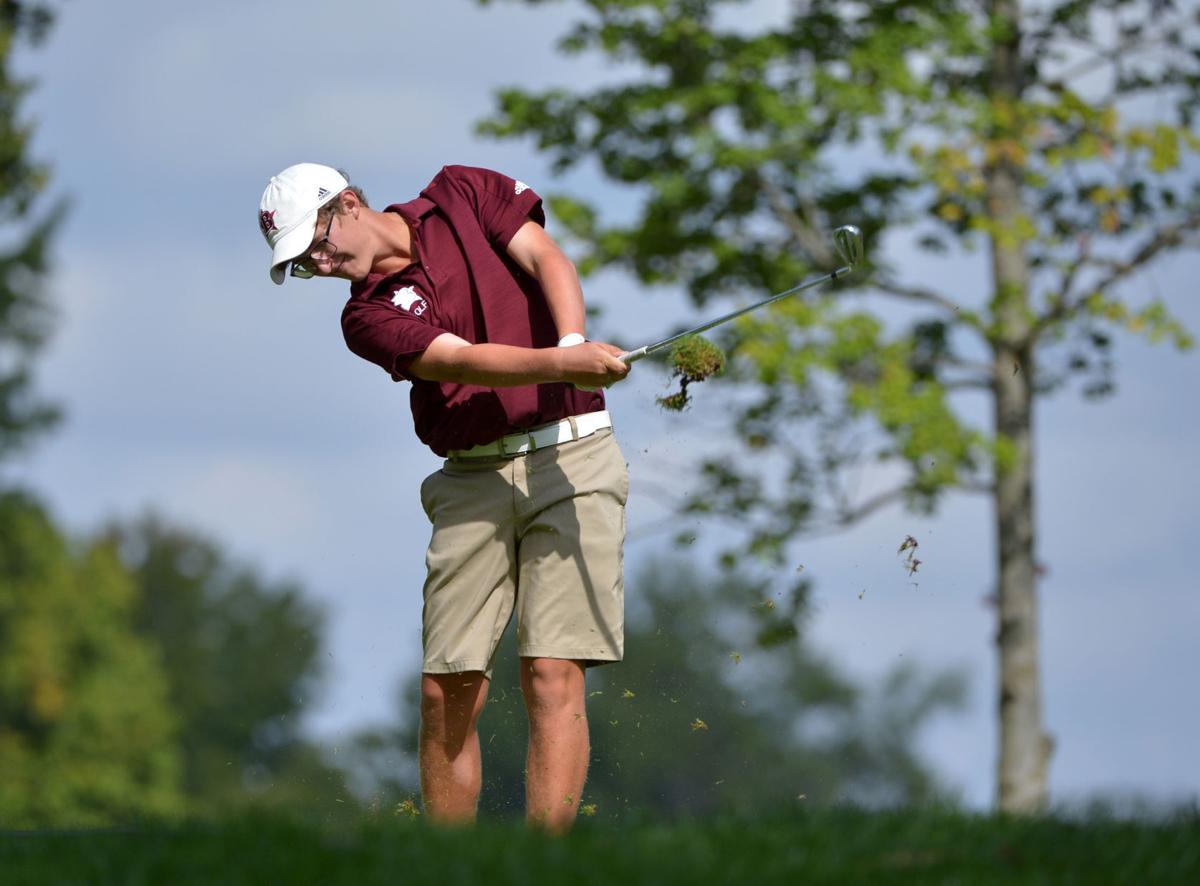 Cy Norman of Benton hits his tee shot on the 8th hole during the IHSA Class 2A Golf Sectional held at Effingham Country Club in Effingham.

But the Ranger junior couldn’t fully enjoy it because a team title didn’t come attached to it.

After holding a six-stroke lead going into the final round, Benton couldn’t match its first 18 holes while St. Ignatius College Prep cut nine strokes off its first round, giving it a nine-shot victory in the team competition.

“Very, very bittersweet right now,” Cy Norman said minutes after holing out on 18 to polish off a 68 and a two-day total of 8-under par 134. “Right now, it’s more bitter than sweet because the emphasis all week was the team.

“Individual is kind of a second thought.”

The Rangers finished second for the fourth time since 2004. This one might have stung more than others because they expected to win this year. Many others expected them to take the first place trophy back to Franklin County.

But on a day where Weibring Golf Club offered good scoring conditions – temperatures in the 80s with a steady, but not impossible wind – Benton turned in a team score 12 strokes higher than Friday’s 291.

Winning a team title takes a team. No matter how well Cy Norman played – and even he had a slipup Saturday with a double bogey and bogey on the back nine – others have to pitch in. Instead, the best score the Rangers got after Norman was Luke Melvin’s 77.

With St. Ignatius receiving a 68 from Ian Love and a 70 out of Liam Nelson, that was a recipe for disappointment for Benton.

“We got clipped today by a pretty good golf team,” said Rangers coach Reggie Norman, Cy’s dad. “Two or three guys didn’t play as well as they wanted to, and with St. Ignatius playing like it did, that was two or three guys too many.”

“Bittersweet, and to be honest with you, it’s more bitter than sweet,” he said. “Cy’s been a part of Benton golf since he was in third grade, and he’s very conflicted. It’s special seeing your kid do it, but I just wish that (last) putt was for a team title.”

The putt Reggie Norman referenced was Cy’s tap-in for bogey at 18, after which father and son shared a long embrace behind the green. It made Cy Norman the first individual boys champion from Southern Illinois since Marion’s Jaret Brewer captured the 2A title in 2011.

Norman’s 134 ties TJ Baker of Boylan Catholic for the second-lowest 36-hole score in 2A. Morton’s Tommy Kuhl carved up the Weibring course for a 13-under 129 four years ago. It appeared Norman might threaten Kuhl until those two bad holes cut his 5-stroke lead over Sam Dykema of Wheaton Academy down to one with six holes left.

But Norman responded in championship fashion with a birdie at 13, the second-toughest handicap hole on the course, and tacked on a birdie at 16 to restore a 5-shot lead.

“It definitely helped, because it switched the momentum,” he said. “I had just doubled and bogeyed at 11 and 12. I needed something to turn it around and at the time, we still had an outside chance to catch the leaders.”

Dykema and Jacksonville’s Brady Kaufmann tied for second at 139. Connor Hamm of Macomb and Billy Gneiser of Hinsdale South shared fourth at 140 and Love placed sixth at 141.

Carbondale’s Ian Davis, who won regional and sectional titles, finished in a four-way tie for seventh at 144 after carding an even-par 71 in the second round.

At Bloomington and Decatur:

At the Class 1A boys event, held in Bloomington, Anna-Jonesboro senior Luke Lasley finished in a four-way tie for fifth at 6-over par 150. Rockridge’s Drew Hall carded an even-par 144 for a two-stroke win.

In Class 1A girls golf at Decatur, Massac County cut 17 strokes off its first round score to finish in seventh place with a team total of 683. Harrisburg senior Madison McClusky was the top individual finisher at 165 after an 82 in the second round.

Marion’s Sarah Capel carded a second straight 79 at the Class 2A championship in Decatur to end with a 14-over 158. Teammate Baylee Kelley shot an 84 and finished with a two-round total of 168.

Sports Column | Les Winkeler: Who's to blame for the demise of the Miners?

Through tears, Mike Shildt thanks Cardinals organization and mentors, acknowledges but does not detail 'differences'

Cardinals fired Shildt, after three consecutive years in the playoffs, on Thursday due to what the team said was a 'philosophical difference,' and officials said it was up to him to reveal those.

CARBONDALE — The showdown turned into a rout.

Sign of the times: Despite being No. 1 nationally, Cards have lost nearly half their TV households from six seasons ago.

DU QUOIN — On a cold and rainy Friday night at Van Meter Field, Nashville took over the game in the second quarter to beat Du Quoin 37-14, to …

Cy Norman of Benton hits his tee shot on the 8th hole during the IHSA Class 2A Golf Sectional held at Effingham Country Club in Effingham.