Voices of stalled seasons | Massac County's McCraw, an artist at heart and a three-sport threat
0 comments
Share this
{{featured_button_text}}
1 of 5 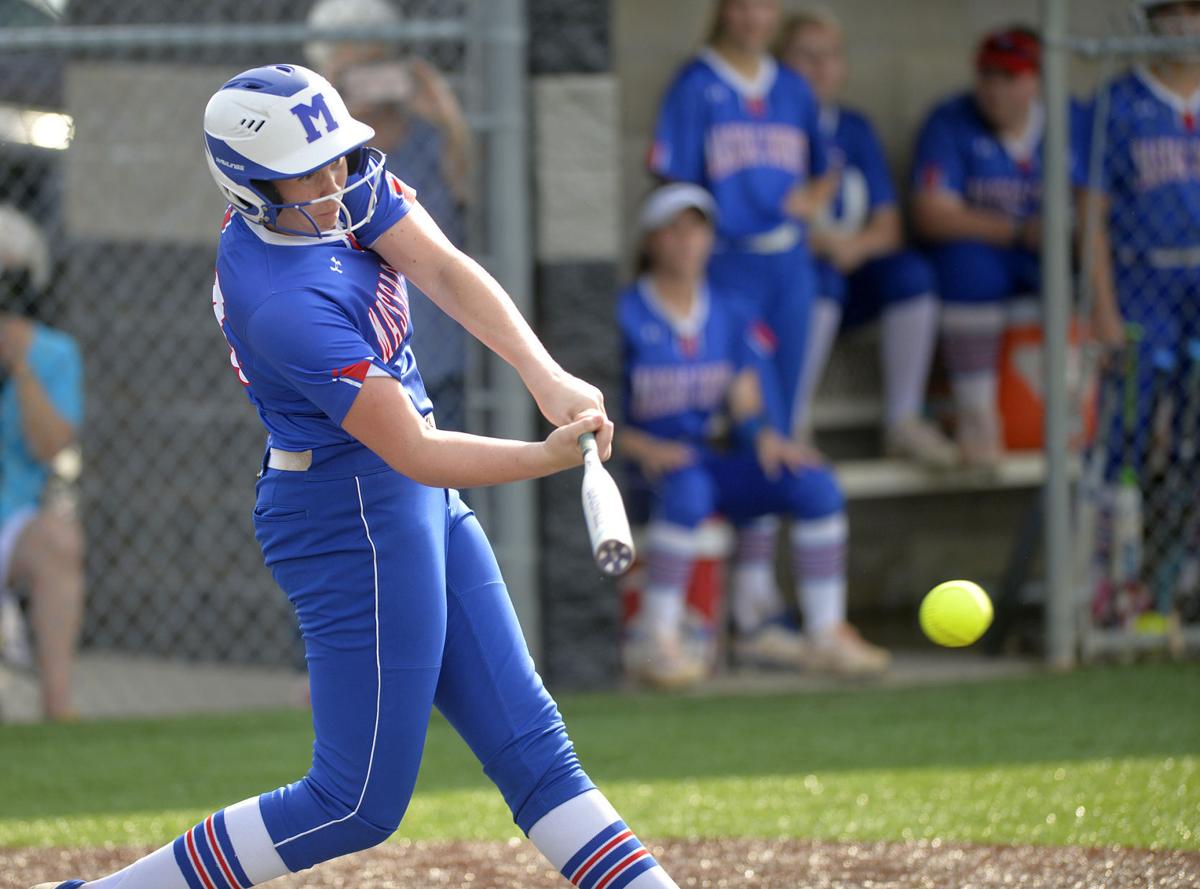 Massac County’s Cali McCraw connects for a hit in the third inning against Marion during the 2019 Class 3A Softball Regional in Carbondale. Massac County held on to win 7-6 in nine innings. 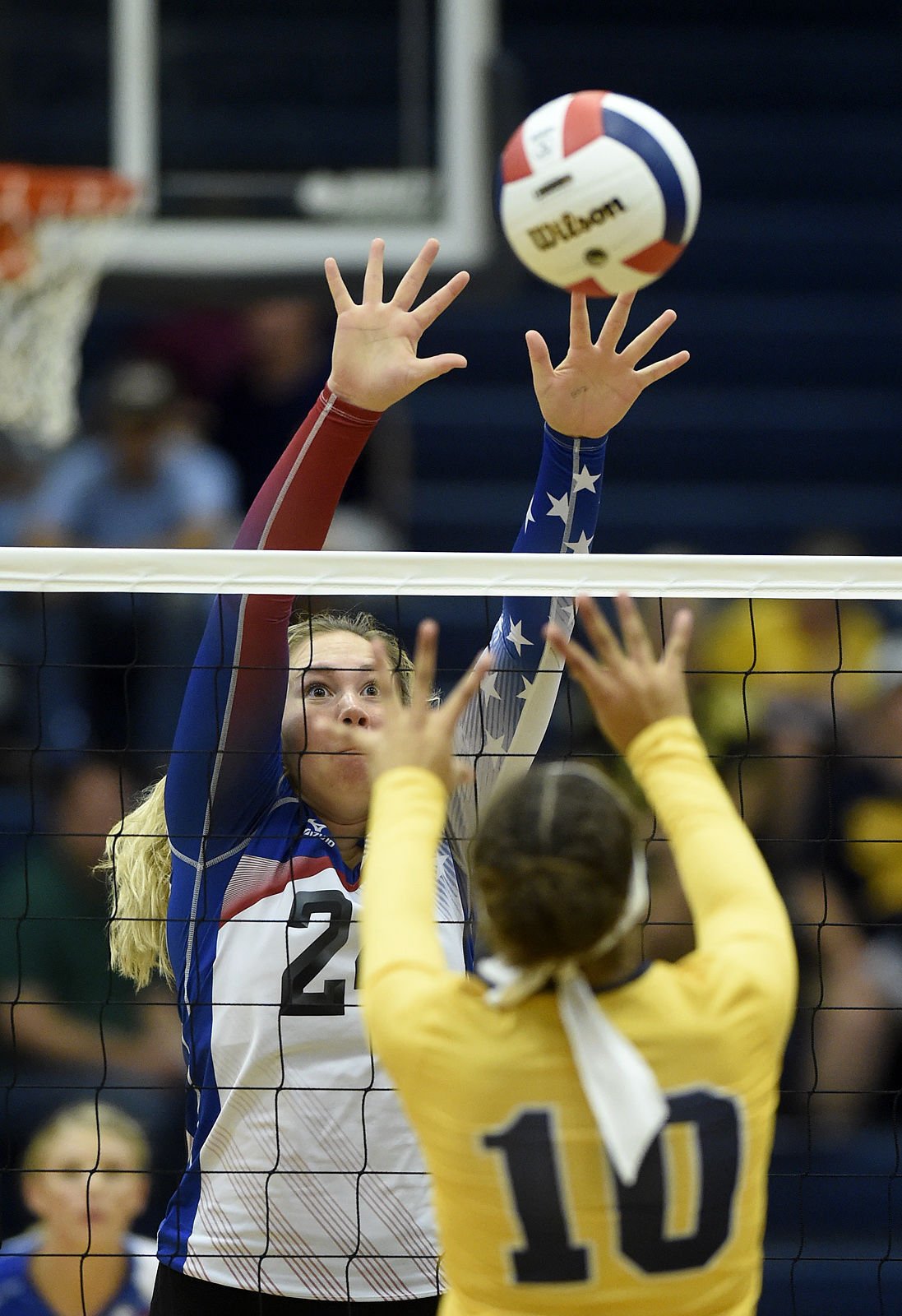 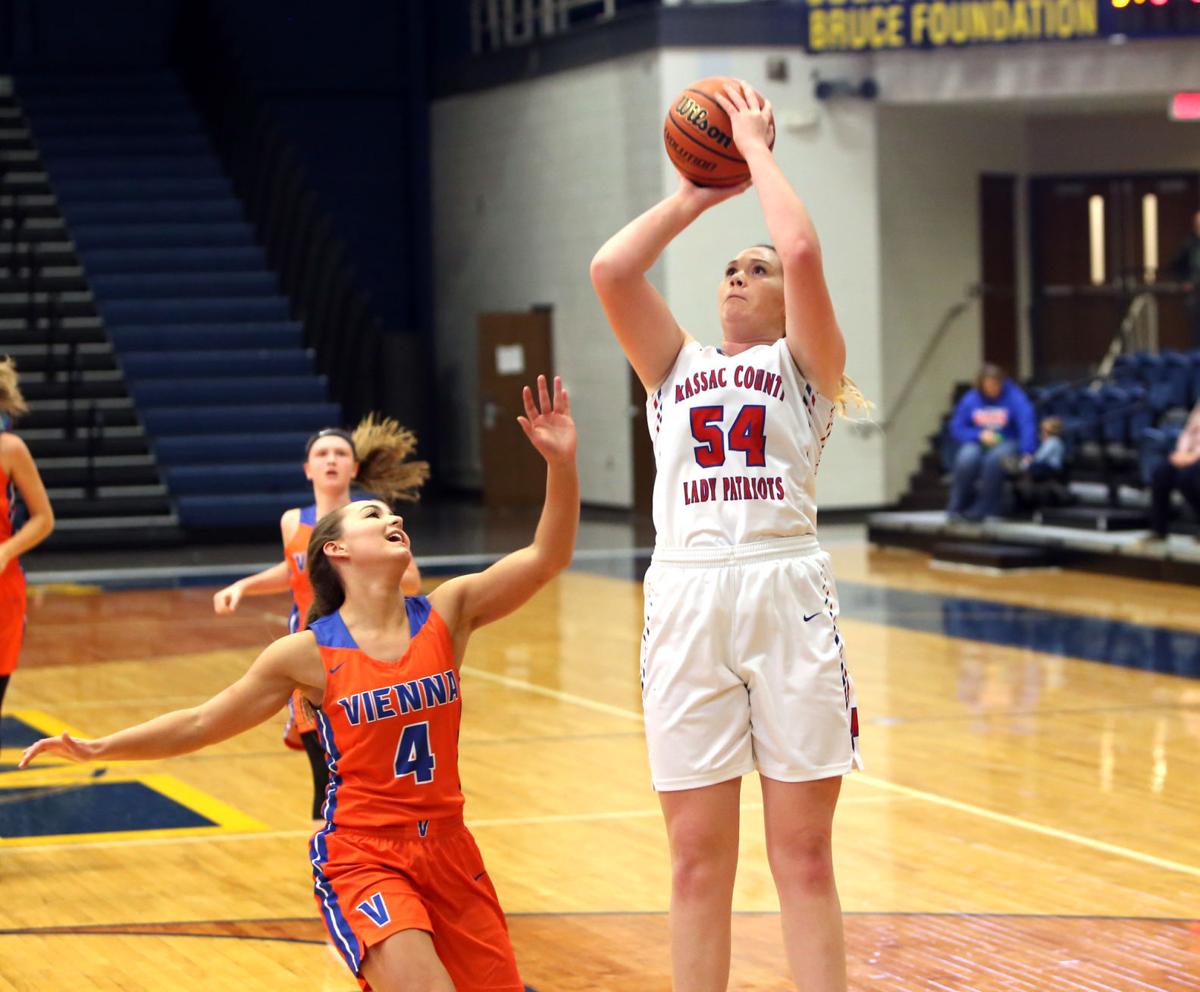 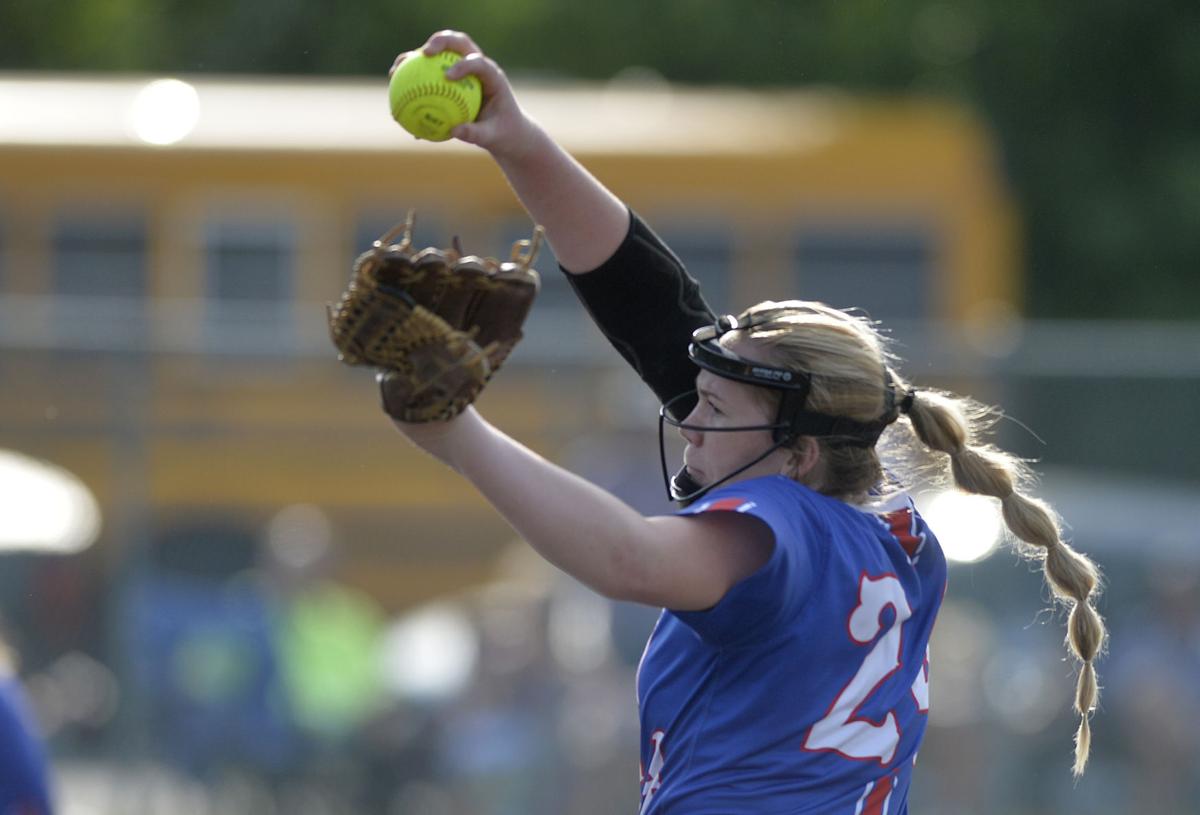 Massac County pitcher Cali McCraw winds up for a pitch in the fifth inning against Marion during the 2019 Class 3A Softball Regional in Carbondale. 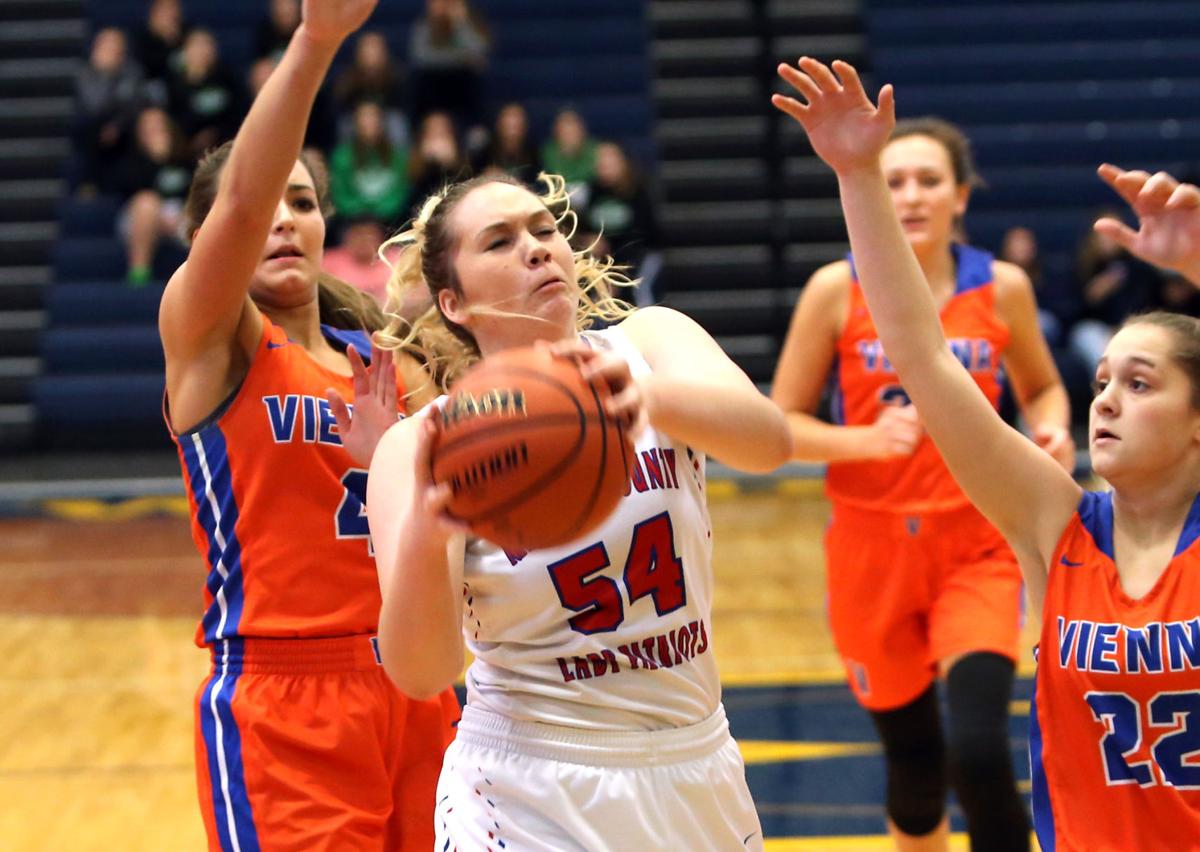 Massac County's Cali McCraw looks for a shot between Vienna's Emma Rush and Kenzie Myers in a game between Vienna and Massac County at the Heartland Regional Lady Cat Tip-Off Classic at Cuss Wilson Gymnasium in Marion.

MASSAC COUNTY — A senior season for Cali McCraw would put her mind at ease.

The 6-foot-3 pitcher is ready for her redemption on the softball diamond after missing out on her junior year due to the COVID-19 pandemic.

“At first I heard rumors we might not have a softball season and I kind of didn’t get it,” McCraw said of her 2020 experience. “I knew there wasn’t a season, but it eventually hit me and I was like wow, I didn’t play softball my junior year.”

McCraw, being the Taylor Swift fanatic she is, won’t leave any teardrops on her guitar if it means she gets a chance to win more high school games.

“I’m kind of in a neutral spot with the pandemic,” she said. “I understand that we need to stay home and quarantine, but it’s sad that I can’t do stuff with my friends when I’m seeing kids from surrounding states playing their sports on social media.”

Like many high school athletes in Illinois, McCraw debated moving to a bordering state such as Kentucky in order to finish out her playing career. While she’s played softball since she was six-years-old, she’s also a three-year participant in volleyball as a middle-hitter and in basketball as a center.

McCraw decided she wasn’t ready to throw in the towel on what’s left of her Patriot playing days.

“I live about five minutes away from Kentucky, so I’ve considered moving, but at the same time Massac County is my school,” she said.

Massac County is where McCraw hopes to finish out her volleyball career with fellow seniors Sidney Wilke, Jenna Bunting and Madison Hammonds. The IHSA currently has volleyball listed as a “medium-risk” sport for this spring and the Lady Patriots have a chance at setting a higher standard than McCraw’s 91-23 volleyball record shows on the surface.

Another 28 wins for McCraw and coach Zach Miller’s team would give their volleyball program an average of at least 30 wins per season over the last decade. They also have a shot at winning back-to-back regional championships for the third time in the past eight seasons.

“With Coach Miller, he is a perfectionist and so detailed on everything he teaches,” said McCraw. “He makes sure we’re doing well in the classrooms and is so enthusiastic about what we need to get better at in practice.”

Considering McCaw won the genetic lottery of ending up with her father’s (Rick McCaw) 6-7 height, jumping hasn’t always been a necessity. That hasn’t kept her from trying to improve her vertical advantage of blocking shots either at the rim or at the net.

She admitted it would be a different story if she took after her 5-11 mother, Sarah McCaw, who she instead credited for her 3.8 GPA; alongside her grandmother, Mary Schneider, who taught business and accounting at MCHS.

“I’m thankful my family has always been influential on me keeping up with my grades,” said McCraw, who is eyeing the University of Southern Indiana as her college of choice for softball. “Getting recruited has been kind of hard in the pandemic, but I plan on setting up a visit soon.”

McCaw thinks being tall is awesome, except for when buying clothes come into play. She is the oldest of two siblings, Lydia (13) and Hayden (5), and enjoys being the more mature sibling because it means she’ll be able to come home from college and watch her siblings play high school sports.

If accepted into USI, McCaw’s new mascot would be a Screaming Eagle, or Screagle, as she put it. When she’s not playing sports she is fulfilling her hobbies as a member of the Art Guild, National Honor Society and leader in her church youth group.

Being that Evansville is only a two hour drive from Metropolis, McCaw likes the idea of staying close to home and having in-state tuition. She identified USI as a top-notch program with excellent coaches that won its first-ever national championship at the NCAA Division II Softball Championship in 2018.

“Throughout the pandemic I’ve played on my travel softball team called the Indiana Gators before things started getting worse and then I started laying off,” said McCaw. “I’m coming up on my third year having Tim Rupert as my travel coach and I’ve made some of the best friends despite being the only girl not from Indiana on the team.”

McCaw is used to making four-hour round trips for her travel games and practices. She’s been pitching on her own using the home gym her family has set up with batting cages, a basketball hoop and a mound to fine-tune her curveball on.

McCaw is an artist whether she’s painting a canvas or corners of a hitters strike zone. Her expressed love for both have similar tastes.

“Art is what I do when I’m away from sports,” she said. “When I’m drawing or painting, I get in this zone and I remain so focused until I’m happy with the result.”

In the wake of racial justice protests this summer, some pro sports teams have dropped mascots that caricature Native American culture. In Southern Illinois, teams using similar names and imagery say they're not planning to change.

In his six seasons as Chicago Bears general manager, Ryan Pace has brought in three quarterbacks to be the starter.

Where Are They Now? | McGill uses softball to forge career path

Little did Jacqueline McGill realize as she was starring on softball fields throughout Southern Illinois a decade ago at Hamilton County that she would be doing what she is today.

Tom Petty once sang that the waiting is the hardest part.

Southern Illinois volleyball coaches are remaining hopeful to begin team practices as soon as Feb. 15 according to the Illinois High School As…

Massac County’s Cali McCraw connects for a hit in the third inning against Marion during the 2019 Class 3A Softball Regional in Carbondale. Massac County held on to win 7-6 in nine innings.

Massac County pitcher Cali McCraw winds up for a pitch in the fifth inning against Marion during the 2019 Class 3A Softball Regional in Carbondale.

Massac County's Cali McCraw looks for a shot between Vienna's Emma Rush and Kenzie Myers in a game between Vienna and Massac County at the Heartland Regional Lady Cat Tip-Off Classic at Cuss Wilson Gymnasium in Marion.