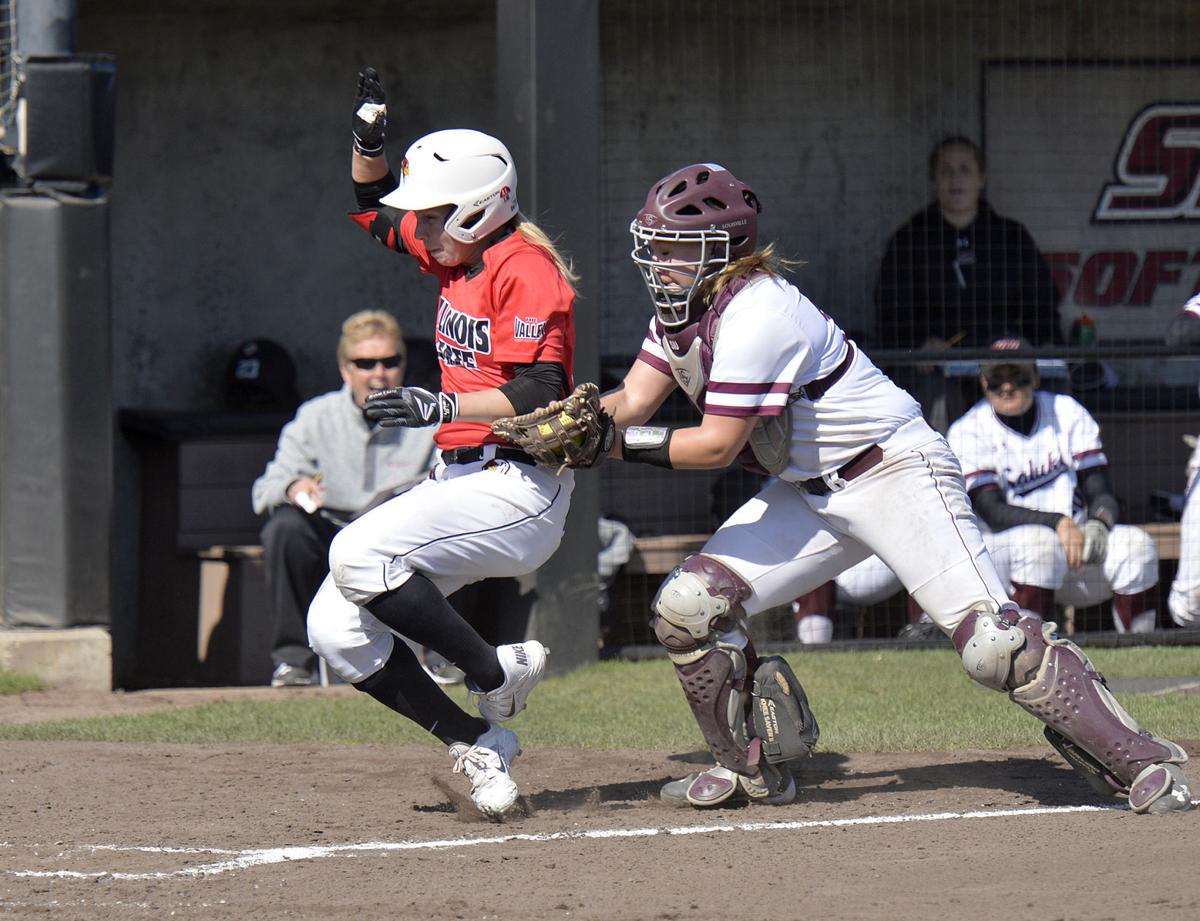 SIU catcher Jessa Thomas (32) tags out Illinois State's Payton Billups as she tries to score in the second inning of the first game of a doubleheader at Charlotte West Stadium in 2016. The Salukis went on to win 1-0. 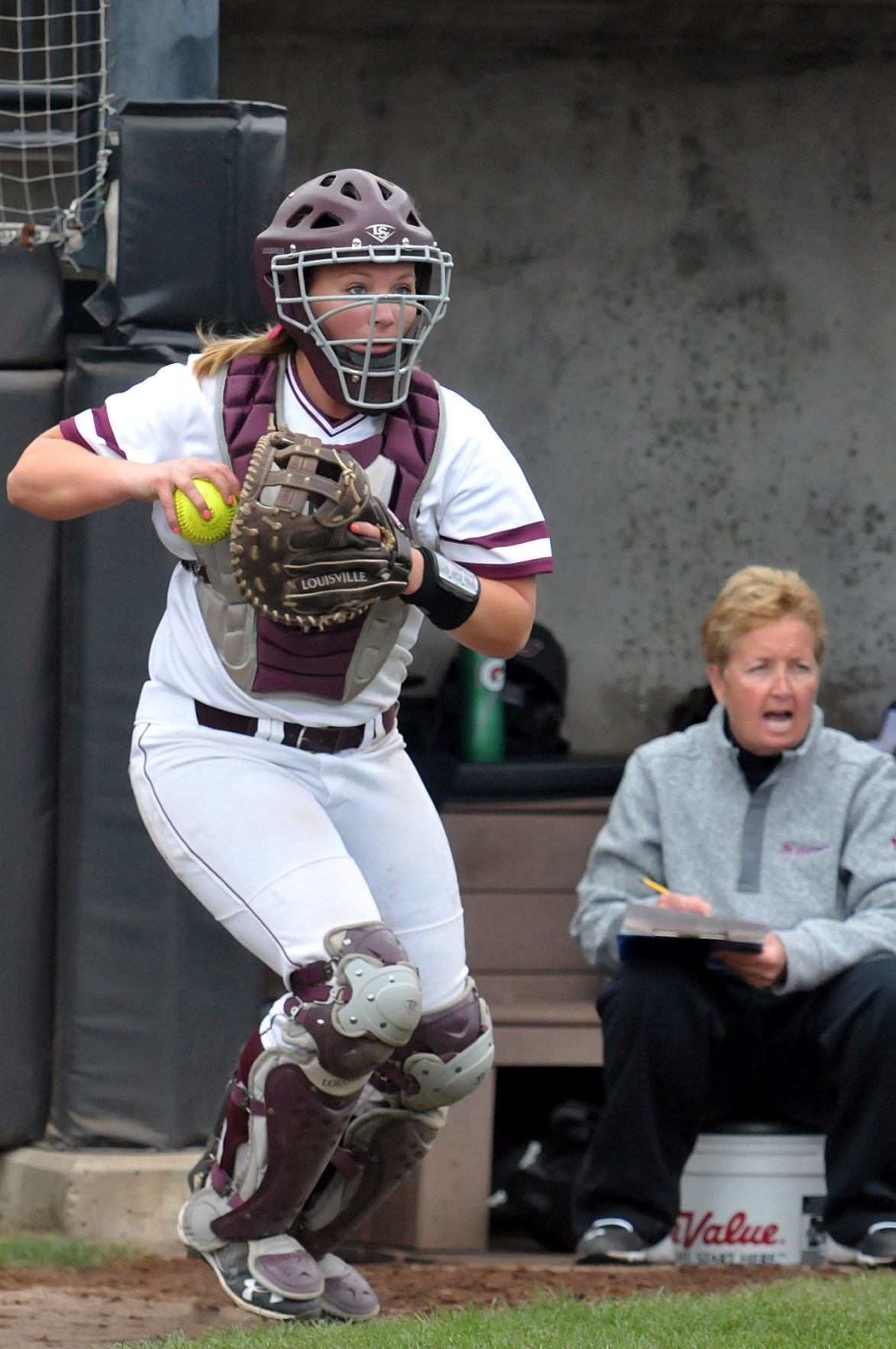 SIU catcher Jessa Thomas looks to make sure no one is running after she caught a foul ball in the fifth inning of game one against Loyola. The Salukis won game one over Loyola 4-1 with a walk off home run in the eighth inning in 2016 at Charlotte West Stadium in Carbondale. 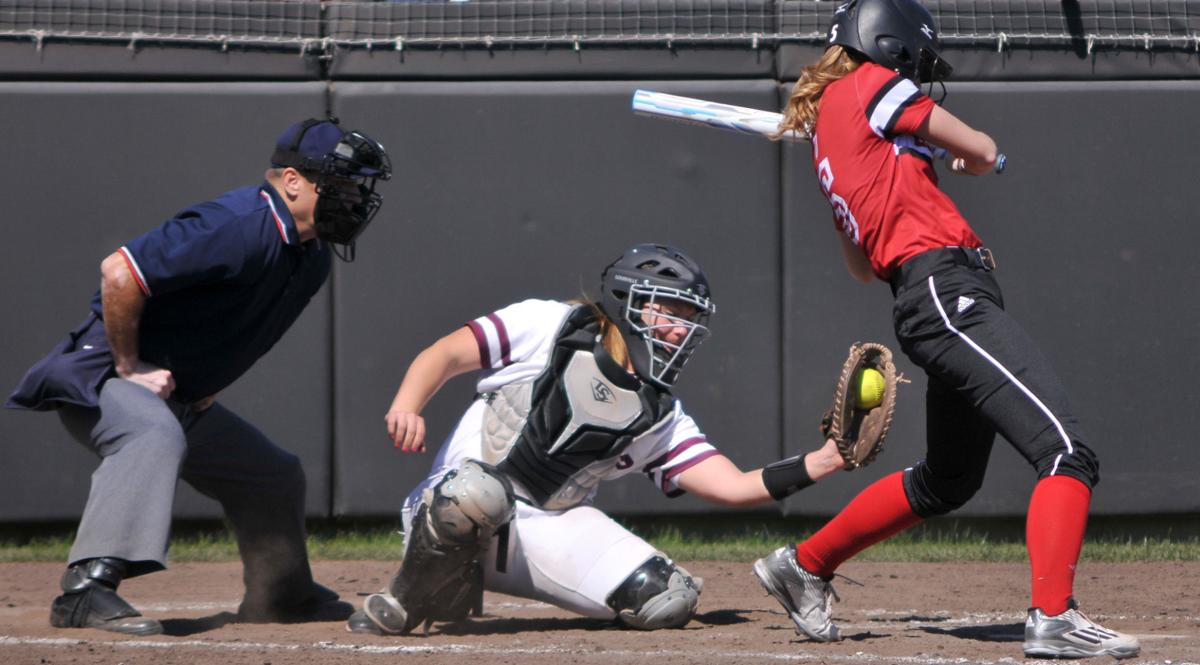 SIU's Jessa Thomas catches a strike thrown by Brianna Jones in game one of a doubleheader between SIU and Bradley at Charlotte West Stadium in Carbondale on March 18, 2017.

JOHNSTON CITY — Jessa Thomas, now with the last name Karcher, was a model student and three-sport athlete for Johnston City in 2013.

Karcher was named The Southern Illinoisan’s Scholar-Athlete of the Year eight years ago after compiling a career softball batting average of .433. The former catcher maintained a GPA that also began with the numeral 4, an important lesson Karcher learned while growing up.

“My dad (Wade Thomas) has coached basketball my whole life,” Karcher said of her father, who is now the principal at Benton Consolidated High School. “I’d say both of my parents promoted being involved in different sports when I was young.”

Karcher had success in discus when she qualified for the Class 1A state track meet her senior season and was also a member of the volleyball team. With softball being her main passion, Karcher played for Lyndell Zanotti as a freshman before Scott Hutchinson took over in her final three years of high school.

Johnston City softball posted a 97-40 record during Karcher’s four years. Her efforts behind the plate and in the classroom earned her an athletic scholarship to play softball  for SIU’s Kerri Blaylock following graduation — a friend and mentor whose relationship she still cherishes.

“It was nice having Coach Blaylock there as a mentor, whether it was athletically or mentally, when I was a college athlete,” Karcher said. “There’s a lot of things they don’t teach you in high school that prepare you for being a full-time college athlete. All they tell you is that you’ll be busy, but it helped having a team of 17 to 20 girls going through the same thing I was.”

Karcher led the Missouri Valley Conference with a perfect fielding percentage during her senior season. She started in 26 of 34 games, drew eight walks, had one homerun and two RBI and finished fourth on the team in putouts with 113.

Her fondest memory of being a Saluki was winning the Missouri Valley Conference at Illinois State in 2017.

“That was certainly a great feeling,” Karcher said. “We got to go to Ole Miss and play, which was a bittersweet feeling because that’s where our season ended. I still talk to Coach Blaylock probably a couple of times a year...most recently was during my engagement and wedding.”

Karcher would earn her degree in social work after graduating from SIU and the following year she graduated with her Master’s after completing a fast track program in May 2018.

Those accomplishments landed her a job at Benton Grade School where she is entering her third year as a School Counselor for Benton #47 in the K-8 district. She is set to complete another Master’s Degree this summer in Educational Leadership with expectations to improve her career down the road.

“My dad has been an administrator forever and I think being a social worker and an administrator kind of go hand in hand,” Karcher said. “In both jobs you’re communicating with students, families and different members of the community. I know I’m still young, but in the future I know my education will be nice to have.”

Karcher recently turned 26 and lives happily married with her husband Logan Karcher in Dahlgren. Her Hamilton County roots brought her back home to where both of her parents and grandparents grew up, which also includes living on a farm with two dogs, pigs, cattle and sheep.

“Dad certainly broke the family mold once he became an administrator,” Karcher said with a smile. “Farming is something both my husband and I have in common.”

When asked what her fondest memory of playing high school sports was, she thought about all of the friendships that made sports fun whether her teams were winning or losing.

Karcher remains thankful for all of the life lessons that sports have taught her throughout adulthood. Now, she’s teaching those same lessons to the younger generations with hopes that it aids their future endeavors one day.

“Sports overall have taught me if you’re working hard in something you can achieve your goals,” Karcher said. “It doesn’t always mean you’re going to be the best at anything and that rings true in jobs and life in general.

“I think that’s what sports have taught me among other things. They’ve taught me how to compete and deal with successes and failures.”

Those who have maintained since July that the IHSA could safely conduct sports in a pandemic are about to get their wish.

Where Are They Now? | Herrin's Gary Rafe was intimidating force in the paint

Gary Rafe was the best player on a super talented 1972-73 Herrin basketball team that not only captured the South Seven Conference championship, but ran the table, a perfect 14-0 en route to a 23-3 overall mark.

While the recent loosening of COVID-19 restrictions in Southern Illinois has inspired some basketball programs to hold daily practices, the Il…

CARBONDALE — John A. Logan College's men's basketball team will actually start where it wants to finish this season.

If Cardinals do not add or discover boost for lagging offense, it could be splitsville for lineup

Sharing playing time at a few positions to maximize the matchups is one plan as spring training approaches.

Where Are They Now? Stokes continues to shine on the court at Colorado School of Mines

If you’re looking for a starting point to explain the excellence of Drew Stokes, start with her hands.

In every other basketball season that he could remember, Ron Winemiller would have spent Monday getting ready for his team’s opening game at t…

Prep Football | Carbondale's Ragland commits to Lindenwood as a defensive back

CARBONDALE — It crushed Peg Banks not to be able to make SIU's men's basketball game at Butler on Dec. 21.

When Missouri's Valle Catholic High School beat Valley Friday night, it improved to 10-6 on the year. That the Warriors have a winning record isn’t the impressive part. They’ve only experienced one postponement due to COVID-19.

Blustery conditions in the forecast for Northeast

Blustery conditions in the forecast for Northeast

SIU catcher Jessa Thomas (32) tags out Illinois State's Payton Billups as she tries to score in the second inning of the first game of a doubleheader at Charlotte West Stadium in 2016. The Salukis went on to win 1-0.

SIU catcher Jessa Thomas looks to make sure no one is running after she caught a foul ball in the fifth inning of game one against Loyola. The Salukis won game one over Loyola 4-1 with a walk off home run in the eighth inning in 2016 at Charlotte West Stadium in Carbondale.

SIU's Jessa Thomas catches a strike thrown by Brianna Jones in game one of a doubleheader between SIU and Bradley at Charlotte West Stadium in Carbondale on March 18, 2017.