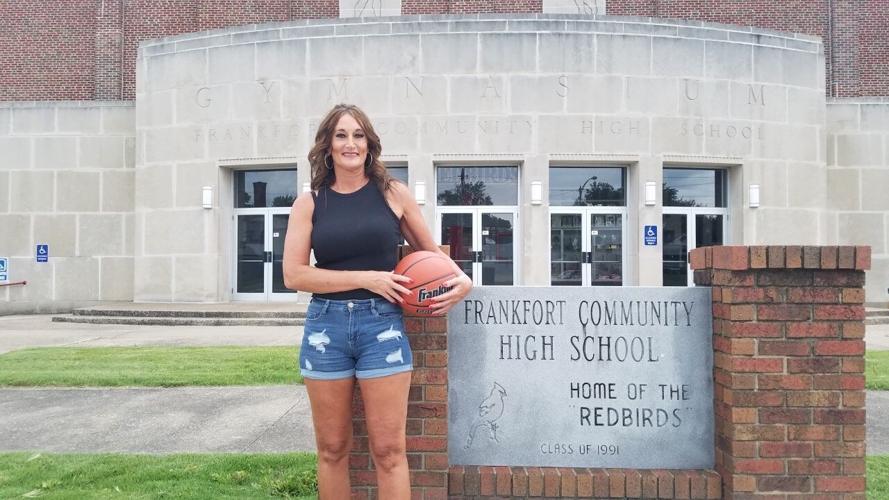 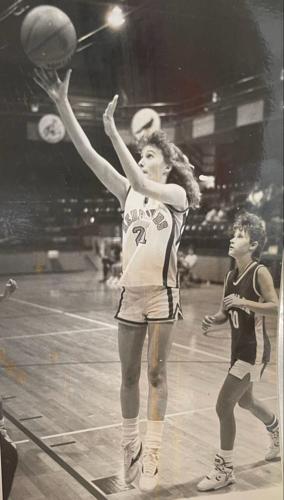 Kellie Nicholson goes up for a jump shot against Centralia in her freshman season with the Redbirds (1988-89). Standing behind her is Centralia guard Stacy Bogle. 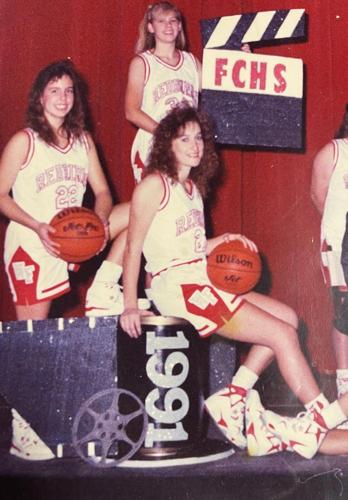 Kellie Nicholson (middle) is surrounded by Ronda Ray and Missy Broy during a photo shoot prior to Nicholson's junior season.

Kellie Nicholson of the Redbirds is guarded closely by Jacie Prather of Harrisburg in game action 30 years ago.

Scoring over 1,400 points and dishing out more than 400 career assists, the latter a school record, Nicholson was a big guard at 5-foot-10 who could score inside and out.

How good was she?

Playing at a time when West Frankfort was still a member of the big-school South Seven Conference, Nicholson won back-to-back Most Valuable Player awards in the league both her junior and senior seasons (1991 and 92).

"I would say that the team we had my sophomore year (1990) was definitely the best of the three teams," Nicholson said. "Jennifer Williams was a 6-foot-3 senior on that team and she was one heck of a post player for us. That gave us an effective inside-out punch."

Nicholson said Harrisburg with Lori Pigg, Amy Cavender, Jaci Prather and Nikki Randolph was the team within the South Seven Conference that gave the Redbirds fits her sophomore year.

The league championship came down to a home game with the Bulldogs.

"I remember drawing a charge along the baseline that was a huge momentum swing for us in that game," Nicholson said. "We would go on to win that game and get our first conference championship. After that, we felt like we could do anything and beat anybody."

In the postseason that year, the Redbirds advanced further than ever before.

"I remember we beat a very good Massac County team in the sectional, and if it weren't for Jen (Williams) having to miss half the game due to foul trouble, I think we would have beaten Nashville in the Super. She had never been in foul trouble before. It was almost as if this one official had it in for her. She touched someone and it was a foul. That's always been a sore spot with those of us who played on that team. Without her, we still played them within five. That's how good a team we had that year. Nobody was jealous of anyone. We were athletic, smart and talented."

Nicholson said the Redbirds beat Massac County again the next year in the sectional (1991) only to fall to a strong Breese Mater Dei team.

"They were just a better team than us," she said of the Lady Knights.

"Joy would grab the rebound, hit me with an outlet pass, and I would get the ball to Missy, who often scored," Nicholson said. "Defensively, we liked to full-court press to take advantage of our quickness."

The Redbirds were the underdog to an immensely talented Massac County squad at the sectional, but somehow managed a third-straight postseason victory over the Patriots and advanced to a third-straight Super-Sectional. The Redbirds built a big first-half lead against Okawville in that Sweet 16 battle on their home floor at Max Morris Gymnasium, but could not sustain their success.

"We were up by 12. I've never seen our gym packed like that for a girls game," Nicholson said. "There were fans sitting in the balcony. It's a shame we couldn't hold the lead."

Centralia, led by Stacy Bogle and Lucretia Maines, won the league title that year and advanced all the way to the Sweet 16 in Class AA (large school class), finishing 27-3 overall. Marion was also quite formidable with Kristie Silvius pacing the offense. The Redbirds competed in Class A.

"While I could shoot pretty well from the outside, I think it gave me more pleasure to make a nice pass that led to a basket," Nicholson said. "Jen had great hands for a center and I was able to get a lot of bounce passes into her near the basket. And if she was double teamed, she would kick it back out to me for an open shot. After Jen graduated, I had another big scorer in Missy that I could get the ball to, so our offense was always pretty good."

"I really taught myself the game," she said. "I was constantly playing pickup games at the city park. A lot of times I played with the boys. I even played on a grade school city league team with the boys before switching over to the girls team when I reached junior high."

Nicholson said she became a huge fan of the game when she was in elementary school, going to as many of the high school boys games as possible and was enthralled with the 1984 Redbirds team coached by Dave Lee that placed fourth at state.

"That's what got me going," she said. "Going to basketball games on Friday night was THE thing to do on Friday nights back then. I couldn't get enough of it."

An outstanding long-range and free-throw shooter, Nicholson's best individual performance was a 32-point effort her senior year against Marion at a tournament hosted by Massac County.

"There was a period of time there where I was shooting like 80% from the 3-point line," Nicholson said.

Mike Karoski, who served as assistant coach in those winning years, describes Nicholson as a "hard-nosed competitor who didn't like to lose."

He said Nicholson's desire to compete and beat her opponent is not easily measured.

"You just can't teach that. Kellie's competitive drive is what kept her one step ahead of the rest," he said. "She wasn't real strong, but she played hard and was a very smart player. The other kids fed off her competitiveness and enthusiasm for the game."

Karoski added that the Redbirds were blessed with some talented players and teams in the late 1980s and early 1990s and Nicholson was certainly one of the best players to ever come through the school.

Because she was one of the region's best players, Nicholson was recruited to play basketball at John A. Logan College, one of the premier junior college women's basketball programs in the country at the time.

"I played for Coach Gary Barton," Nicholson said. "We finished eighth in the nation my freshman and sophomore years. We thought we had a pretty good shot at winning it that first year, but then I rolled my ankle the second game of the tournament and I was done. I remember DePaul University's coach, Doug Bruno, recruiting me. He was interested in some of our other players, but told me he would redshirt me and have me ready to play after I spent a year getting bigger and stronger. I was only 122 pounds at the time. So, I had my opportunity to play Division I basketball, but chose not to go.

"The fact that I had never been to Chicago was definitely a factor," Nicholson said. "I stayed at Logan for my sophomore year instead and we made it back to the national tournament down in Tyler, Texas. We ended up losing and that was the end of it for me."

Nicholson said she enrolled at SIUC in the fall of her junior year and passed on playing ball for the Salukis.

"I got into academics full-time and earned degrees in special education, elementary education and physical education."

Nicholson, who goes by her now divorced married name of Kellie Griffith, has taught at Benton Middle School, where she has also coached volleyball. She has one adult daughter, Morgan, 23, and one adult son, Paxton, 20.

"I'm very proud of what Morgan accomplished. She was only about 5-foot-9, but was strong and did a good job of posting up down low," Nicholson said. "She could score with her back to the basket or facing the basket. She drew a lot of double teams, especially her senior year, and was constantly fouled and going to the line."

"She and I were two different types of players. I was a point guard or shooting guard, while Morgan was a guard who was more of a three (small forward), even though I was an inch taller than her," Nicholson said. "Morgan played out of position all four years because she had to. Most of her points came from around the basket, and from the free-throw line."

Paxton was a solid player on the boys basketball team and even better baseball player where he earned All-Conference and All-South honors as a catcher. He graduated just a couple of years ago and was recently awarded a theater scholarship at the Academy of Art University in San Francisco.

Nicholson, in her spare time, has taken to volleyball officiating. This will mark her second year on the job.

"I miss the competition," she said of her basketball playing days. "I really hated to lose. Fortunately, when I was in school, we didn't do a lot of that. The memories I have of our teams and my teammates are good memories. We worked together well and enjoyed great success. I am proud to say that many of my former teammates are still friends today."

Look Back: The Southern's 2022 Player of the Year recipients so far

It is not hyperbole to call Bill Russell one of the legends of basketball.

Kellie Nicholson goes up for a jump shot against Centralia in her freshman season with the Redbirds (1988-89). Standing behind her is Centralia guard Stacy Bogle.

Kellie Nicholson (middle) is surrounded by Ronda Ray and Missy Broy during a photo shoot prior to Nicholson's junior season.

Kellie Nicholson of the Redbirds is guarded closely by Jacie Prather of Harrisburg in game action 30 years ago.