Thanks for reading! Log in to continue.
Enjoy more articles by logging in or creating a free account. No credit card required.
Log in Sign up Become a Member
You are the owner of this article.
Edit Article Add New Article
You have permission to edit this article.
Edit

CARBONDALE — In 1968, an SIU Carbondale physicist named Walter Henneberger published a paper suggesting that an electron could be freed from an atom and bound to it at the same time, with the help of super-intense lasers.

It was a prediction no one could test. The first laser had only been constructed eight years prior, and wasn’t nearly powerful enough to produce the conditions Henneberger theorized about.

He saw his solution as a mathematical fact, arising naturally from everything scientists knew about how atoms interact with light.

But to his peers, it was nonsense.

“There were just so many papers explaining what was wrong, allegedly, with it,” Henneberger said of his theory. ““Everyone in the United States thought it was crazy. I got the idea that I was never going to do anything for optics.”

He shifted his focus to other realms of theoretical physics.

But 50 years later, the 88-year-old emeritus professor has been vindicated.

In April, a team of German and Swiss researchers announced the first definitive experimental proof of Henneberger’s theories.

They used a laser trillions of times more intense than sunlight to separate an electron from the nucleus of an atom, while keeping it close enough that it still felt the nucleus’s pull.

“Normally we think that when you hit an atom hard enough with a laser, you can knock off an electron from it,” said SIUC Physics Professor Dipanjan Mazumdar. “What he showed is that actually, if you hit it very, very hard, the electron will stay with the atom,” trapped in the oscillations of the laser, but still feeling the pull of its parent nucleus.

In producing that rare "dual state," the European researchers also made several other important discoveries. Most significantly, they found that these "Kramers-Henneberger" atoms, as they're known in scientific literature, can sometimes amplify the laser light that hits them.

The findings have widely been called “fundamental” to understanding the interaction between lasers and gases.

“When he solved the problem, he came up with this beautiful, beautiful answer,“ Mazumdar said. “It was one of those things that was so counterintuitive that people assumed it had to be wrong.”

Over the last 30 years, Henneberger had seen scientific opinions towards his theory change, somewhat. Several papers had been published agreeing with the phenomenon he predicted, and suggesting ways of proving it.

But he was unaware he’d been conclusively proved right, until Mazumdar brought a copy of the new research, to his home, on the west side of Carbondale.

“I feel good,” he said, laughing. “My life was not completely wasted.”

Mazumdar is an experimental physicist. His job is to test the “far-out” ideas conceived by theorists like Henneberger, he explained. When he learned of Henneberger’s research, Mazumdar was eager to meet him.

“I want to know his train of thought,” Mazumdar said. “What led him to come up with this idea? What other things has he thought about but not put into words?”

It’s been 25 years, Henneberger said, since he did any physics. His mind is still full of equations and mathematical proofs, but these days, he mostly fixes clocks.

They hang all over his small living room, looking down on the bookshelves, the ornate rugs, the collections of china and figurines, and the wooden rocking chair where he sits.

He buys them online, cleans them and gets them running, then talks about them with his friends in the local chapter of the National Association of Watch & Clock Collectors.

He likes his hobby for the same reason he likes physics.

Henneberger credits his physics breakthroughs to coincidence, one lucky accident after another.

He gravitated to theoretical physics thanks to an inspiring instructor, Friedrich J. Belinfante, who came to the United States fleeing Hitler.

It’s a passion he might never have discovered, Henneberger reasons, if Hitler hadn’t been so stupid as to drive away many of Europe’s brightest minds.

Henneberger was drafted out of his Purdue University graduate program and sent to Fort Bliss, to serve during the Korean War.

It seemed like a bad break at the time, but it gave him the opportunity to study in Germany, his parents' homeland, on the GI Bill.

There he would receive his doctorate, and later meet his wife, Gerlinde, at a festival of Mozart music held in a town where Mozart stopped for coffee, just once, Henneberger said.

He came to SIUC in 1963, having heard good things from a friend in the service. He liked the salary offer and the small physics department.

“What I really wanted here was people who would let me alone and let me work, and that was exactly what I got,” Henneberger said. “It was a great place to be, if you didn’t need to be prodded all the time.”

His fateful 1968 paper was published thanks to another stroke of luck. John Van Vleck, a Harvard physicist who would later win the Nobel Prize, came to SIUC to defend a former student who he believed had been unfairly fired from a teaching post.

Henneberger met Van Vleck, showed him his work, and won his support.

Without it, he says the paper could just as likely have been thrown in the trash as published.

“People can take bows everywhere, ‘Oh, I did something wonderful ... Like hell you did,’” Henneberger said. “There’s so many things that lead up to this that were accidents.”

Now, Henneberger is content to be another building block in the knowledge of the physical world.

“It’s nice to know that I did something useful,” he said.

To Mazumdar, Henneberger’s career is an example of physics working the way it should: theorists leading the way with innovative ideas, and experimenters putting them through rigorous evaluation.

That’s how a once far-fetched idea becomes scientific truth.

“If you can hit one bullseye in 20 tries you are an amazing scientist, because you are proving something new,” Mazumdar said. “To have a theory which was proven in his lifetime, we can actually say that he is pretty lucky.”

In 1916, Albert Einstein predicted that light, and even time, could be affected by gravity. In his general theory of relativity, he envisioned a universe where bodies with strong gravitational pull, like a black hole, could bend the light and time that passes them, slowing them down.

In 2015, a team of scientists called the LIGO group proved him right. They detected and recorded gravitational waves: waves of energy unleashed by the collision of two black holes, a billion years ago.

In doing so, they showed gravitational waves could stretch and squeeze light and time, causing them to pass at different speeds for different observers.

The research won the Nobel Prize in 2017.

Though Henneberger’s work is much smaller in scope, it has one clear similarity to Einstein’s.

No one knows yet how it will be used. But scientists agree it’s pretty important.

“You might not see an application which uses this theory in the next 20 years, but I’m pretty sure a lot of fundamental work will come from here,” Mazumdar said. “It’s almost like a solution looking for a problem.”

Mazumdar can imagine the possibilities, from even stronger lasers, to NASA research.

“I’m sure a lot of creative people are waiting for these discoveries,” he said. He hopes to share Henneberger’s name and story with his undergraduate quantum mechanics students this semester, even if they can’t yet grasp the equations Henneberger composed.

“I’m very happy to know somebody at SIU did this work,” Mazumdar said. “There’s a pride attached to it.”

Region 5 of the state's coronavirus plan, which includes Southern Illinois, reached 8% for its COVID-19 positivity rate as of Oct. 10, the latest day for which data were available. Two more days above that number and the region would be due for greater bar and restaurant restrictions. 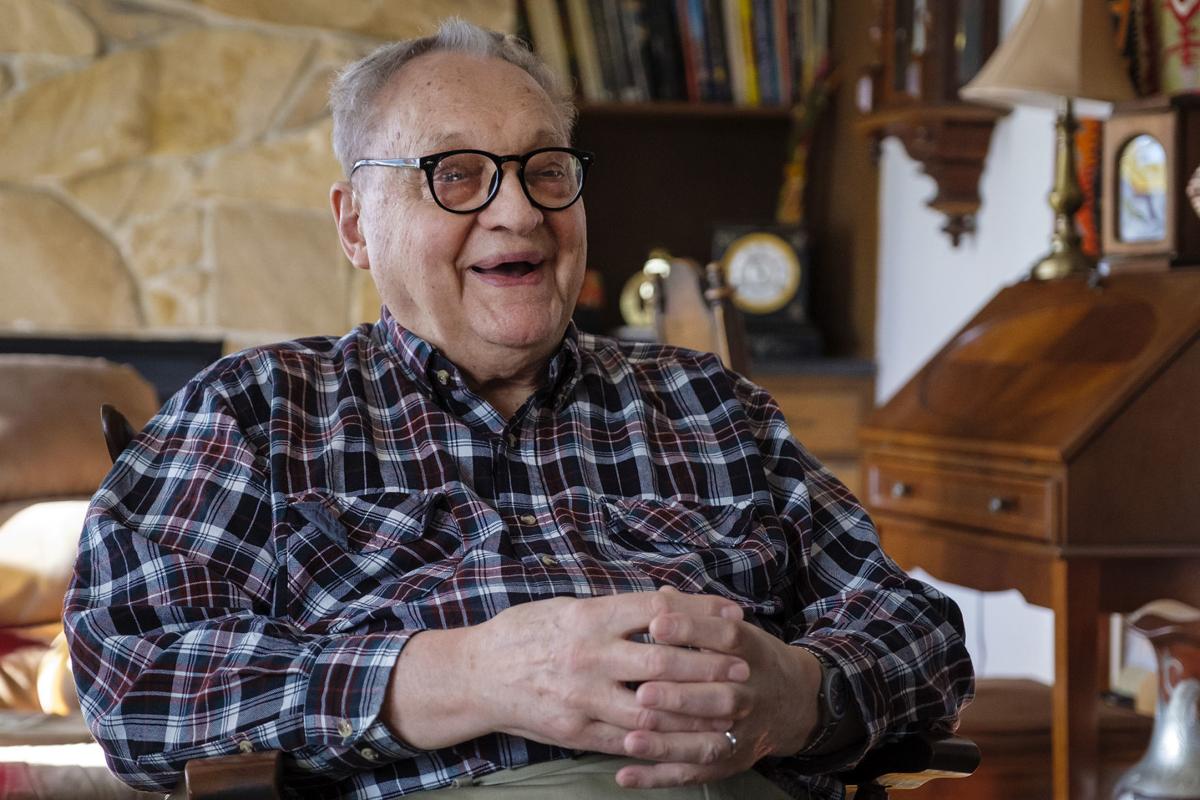 Retired physics professor Walter Henneberger discusses his work, during an interview on Tuesday in Carbondale. 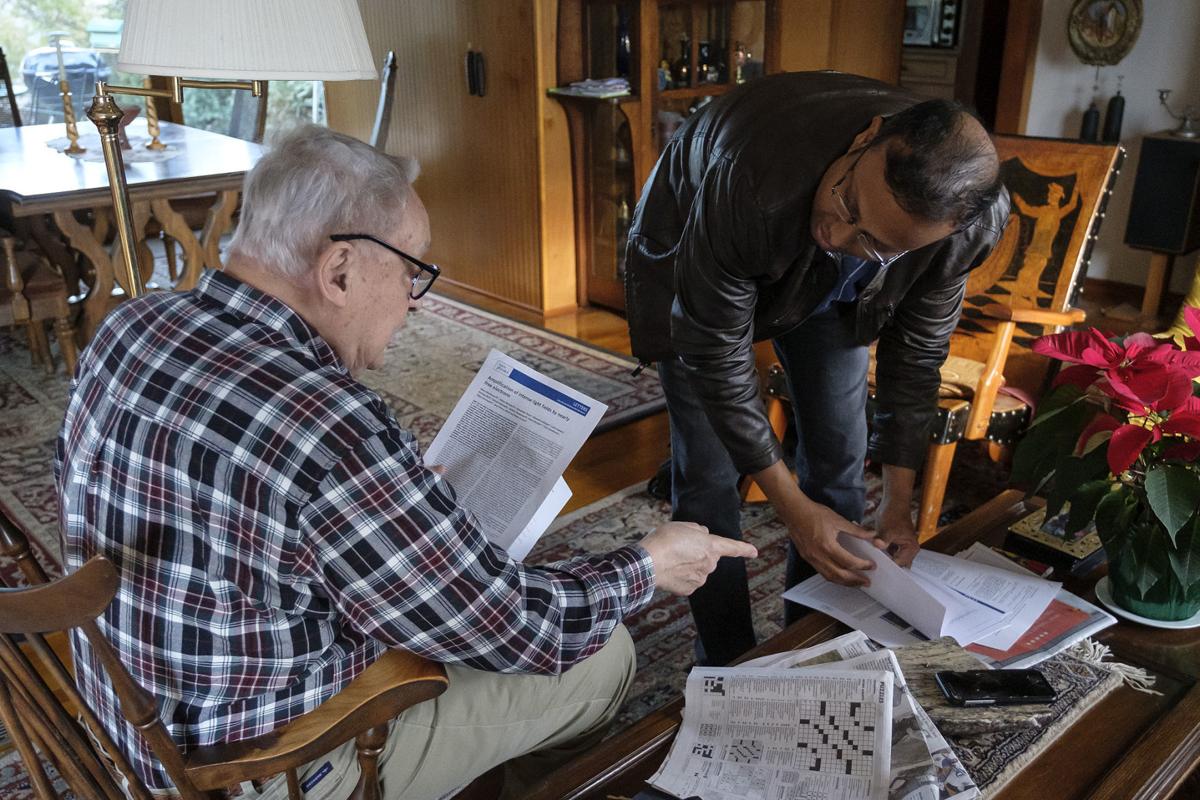 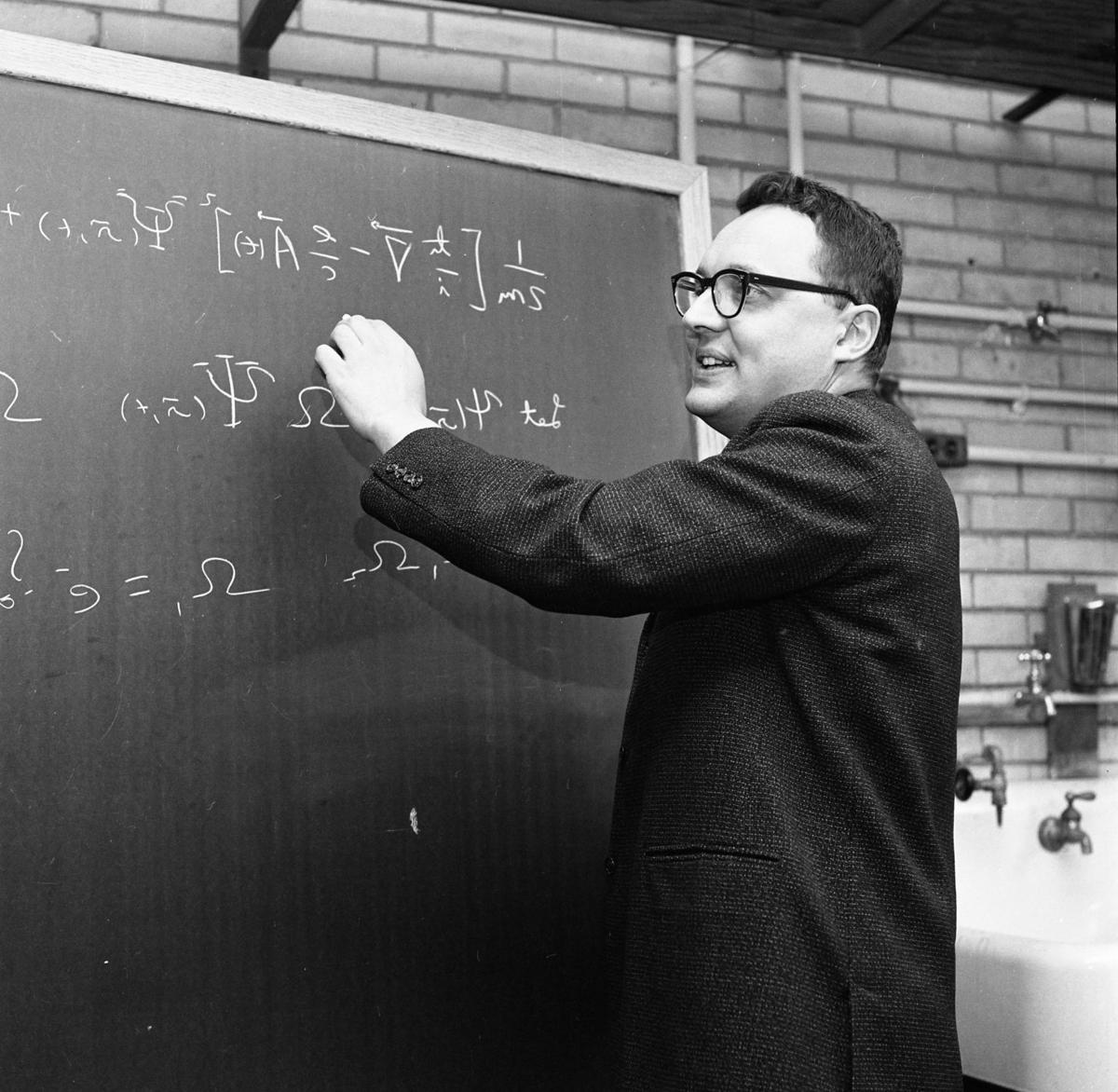 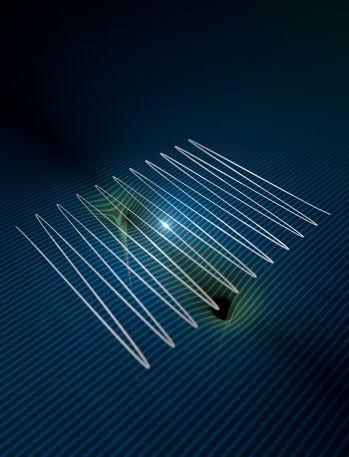 Schematic illustration of the Kramers Henneberger potential formed by a mixture of the atomic potential and a strong laser field. 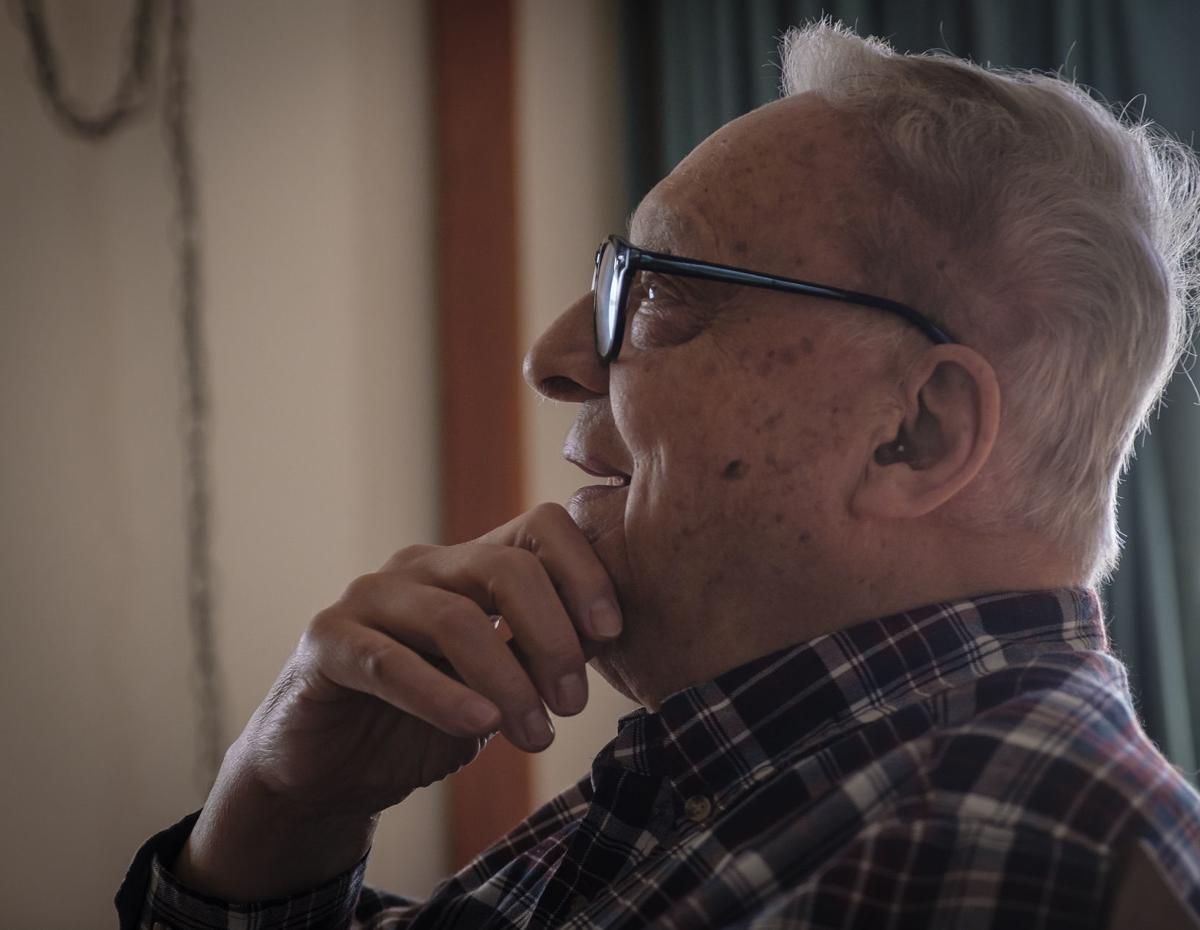 Retired professor Walter Henneberger reflects on his time at SIU Carbondale. Theories he proposed in the 1960s have sparked new experiments, even this year.